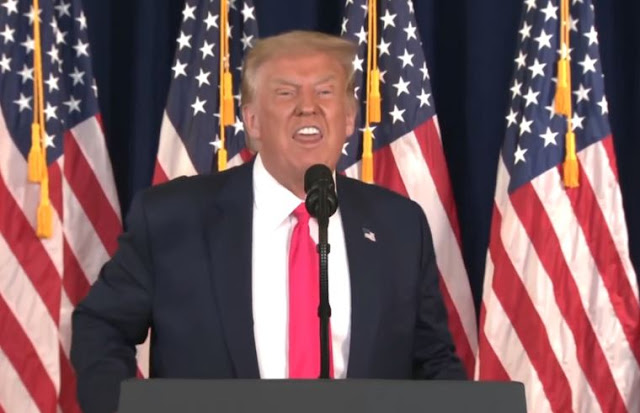 It's a lie Trump has uttered at least 138 times, according to the Washington Post's data base of Trump's 20,055+ lies. The truth is Barack Obama passed Veterans Choice (The Veterans' Access to Care through Choice, Accountability, and Transparency Act) in 2014.

When a reporter (and not only a reporter, but a female reporter, Paula Reid of CBS News) brought it up on Saturday, Trump immediately ended his press conference.

In 2018, Trump signed the VA MISSION Act, which modified and expanded the eligibility criteria from the Choice program.

CNN notes that Trump has claimed over and over that he created Veterans Choice -- after everyone else had failed for "50 years".

Reid: "Why do you keep saying that you passed Veterans Choice?"

Trump ignores the question and tries to call on another reporter.

Reid: "You said that you passed Veterans Choice. It was passed in 2014...it was a false statement, sir."

Trump promptly ends the press conference, angrily spitting out the words "Thank you very much" and walking away.


Trump walks out of his news conference after @PaulaReidCBS challenges him on the Veterans Choice lie he has told more than 150 times: https://t.co/4OfLneQ089
— Daniel Dale (@ddale8) August 9, 2020

Trump abruptly ended his Q&A when @PaulaReidCBS asked him this: "Why do you keep saying that you passed Veterans Choice? It was passed in 2014. But it was a false statement, sir." pic.twitter.com/roJ3ngGUdI
— Brian Stelter (@brianstelter) August 8, 2020

Trump gets frustrated when @PaulaReidCBS won't stop trying to ask him a question about why he keeps lying about Veterans Choice, then abruptly ends the news conference as "YMCA" plays pic.twitter.com/Z3uVxebKGH
— Aaron Rupar (@atrupar) August 8, 2020

And after @PaulaReidCBS asks him why he keeps lying about passing Veterans Choice, the President promptly walks out...
— Jonathan Franks (@jonfranks) August 8, 2020