Trump Attacks Biden For . . . Abandoning Pennsylvania When He Was 10 Years Old 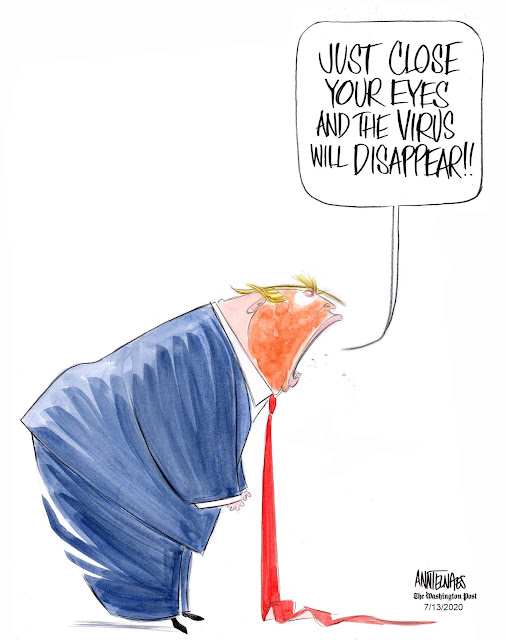 Trump is out here attacking Biden for moving away from Pennsylvania when he was 10 pic.twitter.com/x2KQchMw1F
— Aaron Rupar (@atrupar) August 21, 2020

"They never cried a day in their life. They were almost all crying. Big, strong guy." -- this story is totally made up. It never happened. pic.twitter.com/kVP3prq8Qk
— Aaron Rupar (@atrupar) August 21, 2020

"When I was up in Maine two weeks ago" -- Trump's Trump to Maine took place on June 5, well over two months ago pic.twitter.com/tvvMZLSHnZ
— Aaron Rupar (@atrupar) August 21, 2020

Trump says people used to tout New Zealand but they "had a massive breakout yesterday."

McEnany said Trump "does not know" the people involved with Bannon's wall initiative.

In addition to Bannon, Trump actually knows most of its board of directors.


Apparently, The US Needs To Bring Back Slavery So It Can Fight Fires (In Forests That Are Not In Broom-Clean Condition)


Maybe it's an extreme position but I think the United States should abolish slavery.
— Chris Lipe (@spherulitic) August 21, 2020

“Why didn’t Joe Biden use his speech to talk about how great Donald Trump is” is a strange argument pic.twitter.com/b23o21z7ZF
— Acyn Torabi (@Acyn) August 22, 2020

Former Trump official: "The president would call us, and ... he would say, 'Why the hell didn't you watch Lou Dobbs last night? You need to listen to Lou, what Lou says is what I want to do.'"

Millions of Trump fanatics are in the grip of a deranged conspiracy theory about the abuse of children, meanwhile, top officials in the Trump administration conspired to abuse children as a matter of public policy. https://t.co/hg8OS2fBVS
— b-boy bouiebaisse (@jbouie) August 21, 2020

It's a microcosm of everything Trump did wrong with the coronavirus. He has no plan and the result is chaos. https://t.co/HQGp03uoiD
— Aaron Rupar (@atrupar) August 21, 2020


New Book On Fox News
Sean Hannity Admits Off-The-Record That Trump Is "Batshit Crazy"; Trump Treats Him "Like A Wife In A Sexless Marriage"

Trump to Hannity on the presidency: “If you are not at the top of your game, it’s not going to be a pretty picture. It’s like: chess masters. And if you are not a great chess master, you’re gonna have a problem."
— Daniel Dale (@ddale8) August 21, 2020


Looks Like DeJoy Is A "Stone Cold" Serial Liar And Criminal

For instance, compare this testimony with the consistent reporting since July that DeJoy ordered postal workers not to incur overtime (or take “late trips”) to complete deliveries, but to wait for the next regular time shift. https://t.co/XJnSqX0DQO https://t.co/NLHqq5NBPl https://t.co/zM5J3r52Gk
— southpaw (@nycsouthpaw) August 21, 2020

Postmaster General DeJoy himself confirmed that there have been significant service slowdowns. It is makes no sense at all for him to say USPS sorting machine "are not needed." Put them back. https://t.co/R6MuwASB89
— Rep. Don Beyer (@RepDonBeyer) August 21, 2020

This is a public service, he is a public employee. The public should be able to see this analysis as well as his calendar, which he is also hiding so we don't see who he has been meeting with. https://t.co/qWfIZIVZXT
— Jennifer Hayden (@Scout_Finch) August 21, 2020