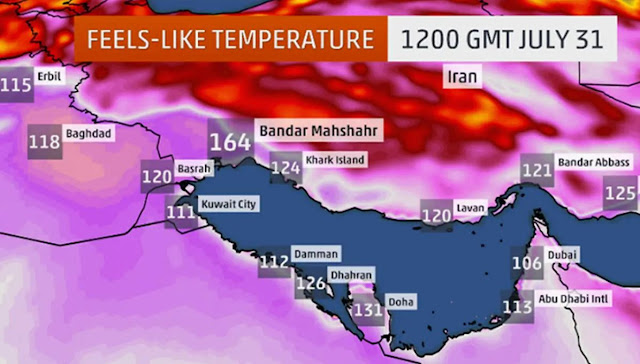 The next day, Iraq's capital recorded its second-highest temperature on record: 124. The southern Iraqi city of Basra recorded temperatures of 120+ degrees for several days, with a high of 122 on Thursday. Amara matched that record on the same day.

On Wednesday, a location about 30 miles east of Beirut registered Lebanon's highest temperature ever: 113.7, and the Syrian capital of Damascus tied its hottest temperature on record: 114.8. In Riyadh, Saudi Arabia, the temperature hit 115 degrees this week.


Temperatures regularly go above 115 degrees in the summer in Riyadh, Saudi Arabia; Amman, Jordan; and Baghdad; 120-degree days are no longer exceptional. ... At Houche al Oumara in Lebanon, temperatures rose to nearly 114 degrees — one of the hottest temperatures ever recorded in the country. Temperatures also soared across much of Israel this week, reaching 111 degrees at the Red Sea resort town of Eilat, and 103 in the northern city of Tiberias.


While heat records can occur thanks solely to natural variability, they are disproportionately more likely to occur thanks to warming effects of climate change. Moreover, the human contribution of greenhouse gases to the atmosphere has knocked the earth’s relative balance of cold-and-warm anomalies off-kilter, skewing the planet strongly hot.

Several major international cities have notched their highest temperatures on record in the past several summers, including Paris, Montreal, Havana, Glasgow and San Francisco.

In the US, ten states have recorded temperatures of 120 or higher. Four of them (New Mexico, Texas, Arizona, and Nevada) came during a three-day period in late June 1994. And thirteen states recorded all-time highs (ranging from 109 to 122) between July 6 and August 12, 1936.

From 1922 until 2012, the World Meteorological Organization's record for the highest official temperature on Earth was 136.0 F (57.8 C), on September 13, 1922, in 'Aziziya, Libya. The WMO decertified the record in January 2012, citing persuasive evidence of a faulty reading recorded by an inexperienced observer.

A May 2020 study entitled "The Emergence of Heat and Humidity Too Severe for Human Tolerance" stressed the importance of "ascertain[ing] how acclimation to high-heat-stress conditions is diminished as the physiological survivability limit is approached."

Imagine if 99 was your average temperature for the whole month. Yes that includes day and night. https://t.co/1BwQbvDvcl
— Jeff Berardelli (@WeatherProf) August 1, 2020