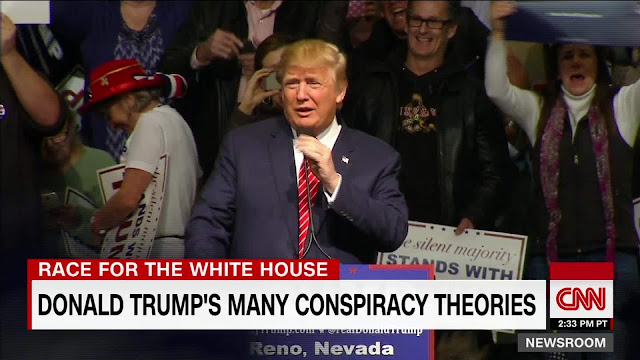 
President Donald Trump has been a conspiracy theorist for years. Perhaps never before, though, has he pushed so many conspiracy theories at one time. With two months to go until Election Day, Trump is simultaneously promoting at least nine baseless conspiratorial tales — about protests, about the coronavirus, about voting and about opponent Joe Biden — while embracing believers in the QAnon conspiracy nonsense.

Here's a breakdown of what he's saying and why it's wrong.

Thugs On A Plane

In a Monday interview on Fox News, Trump told a story about what he claimed was a flight to Washington in which the plane was "almost completely loaded with thugs wearing these dark uniforms," people bent on causing destruction in the streets. He repeated a version of the story on Tuesday — but that time said the flight was traveling from Washington rather than to Washington.

Facts First: As of Wednesday, neither Trump nor anybody around him had presented any evidence for the story.

In the Monday interview, Trump suggested that violent protesters were being funded by "some very stupid rich people." This was similar to a claim he made earlier in August, when he alleged on Fox that antifa activists were being funded by the Democrats, billionaire George Soros or "other people."

Facts First: There is no basis for the claims that the Democrats, Soros or another wealthy mystery patron is funding antifa or violent protesters in general. Some famous and wealthy people have donated to organizations affiliated with the Black Lives Matter racial justice movement, but that's not what Trump was insinuating.

On Twitter and in the Fox News interview (parts of which aired on Tuesday), Trump promoted a claim — touted on Twitter by a supporter of the QAnon conspiracy theory — that the US Centers for Disease Control and Prevention had admitted that only 6% of reported Covid-19 deaths are people who "actually" died from Covid-19.

Facts First: Trump was wrongly describing the 6% statistic. The CDC simply said that 6% of Covid-19 victims' death certificates listed only Covid-19 as a cause of death. The other 94% of death certificates included other conditions as well — but the presence of "comorbidities" does not mean Covid-19 didn't cause the death. The CDC's chief of mortality statistics, Bob Anderson, noted in a statement to CNN on Wednesday that the other causes listed on Covid-19 victims' death certificates may include "chronic" conditions like hypertension and diabetes — with which many people can live normal lives for years until a Covid-19 infection kills them. Anderson noted that the causes may also include problems that occurred because of Covid-19, like respiratory failure or pneumonia. Anderson added in the email that "in 92% of all deaths that mention Covid-19, Covid-19 is listed as the underlying cause of death" — "the condition that began the chain of events that ultimately led to the person's death." Dr. Anthony Fauci, similarly, said on ABC's "Good Morning America" on Tuesday that the presence of comorbidities "does not mean that some who has hypertension or diabetes who dies of Covid didn't die of Covid-19. They did." Fauci said there should be no "confusion": "It's not 9,000 deaths from Covid-19. It's 180-plus thousand deaths."

Facts First: This is false. There is no evidence of any mass fraud in California or New York in the 2016 election.

The General Fairness Of The 2020 Election

In a speech to the Republican National Convention, Trump said, "The only way they can take this election away from us is if this is a rigged election."

Facts First: This is false. There is no evidence that the election is or will be rigged. Trump, who has been trailing for months in national polling, can certainly lose in a legitimate contest.

Mail Voting In The 2020 Election

Trump has repeatedly alleged in the last month that the increased use of mail-in voting this year will produce a rigged election. He has tried to cast doubt on the safety of drop boxes where mail ballots can be deposited. He has claimed that foreign countries can easily interfere with mail voting. On Wednesday, he suggested that there is something nefarious about the fact that he may have a lead in votes counted on election night but then turn out to lose the election after mail ballots are counted in the following days.

Facts First: All of this is wrong. Mail voting is not rife with fraud; drop boxes are secure; experts say it would be extraordinarily difficult for foreign countries to interfere with mail ballots, and US intelligence has said there is no evidence they are even trying to do so; and there is nothing "rigged" about states taking time to count all of their votes.

Trump, who has repeatedly tried to portray Biden as a puppet of the far left, went further in the Fox interview — saying Biden's strings are being pulled by "people that you've never heard of. People that are in the dark shadows."

Facts First: This is pure nonsense. Biden's senior campaign staff is made up of Democrats, many of whom have been involved in Democratic politics for decades, and there's no basis for the claim that shadowy figures are controlling him.

Trump has now dragged Biden into his frequent allegation that President Barack Obama spied on his 2016 campaign. He said on August 12: "... they spied on my campaign, President Obama, Biden and everybody else, and they got caught."

Facts First: There is no evidence Biden or Obama had any personal role in ordering the FBI surveillance of Trump's campaign, which came as part of its investigation of the campaign's relationship with Russia.

Trump alleged, in the Fox interview and in an interview with the Washington Examiner last week, that Biden is taking some sort of performance-enhancing drug or drugs. He told the Examiner that Biden could not possibly have improved so much in his final Democratic debate against Sen. Bernie Sanders without artificial help.

Facts First: This is more nonsense; there is no basis for the claim. Trump made a similar and equally groundless suggestion about Clinton during the 2016 campaign.


What Else Did President QAnon Do Today?

Trump: We are "rounding the turn" on coronavirus. pic.twitter.com/ew4nrnamQa
— The Recount (@therecount) September 2, 2020

When the virus continues to spread indefinitely and Americans continue to die by the thousands, just remember that Donald Trump needed his daily dose of claps. https://t.co/o1WMtypnQy
— Brian Tyler Cohen (@briantylercohen) September 2, 2020

he really said it to this crowd too pic.twitter.com/ID4Bjy5a1S
— Brennan Murphy (@brenonade) September 2, 2020

Trump is in North Carolina using a military ship as a prop for a campaign speech pic.twitter.com/n9gEci46Fy
— Aaron Rupar (@atrupar) September 2, 2020

Without a shred of irony Trump makes a case that American troops didn't fight in World War 2 so antifa could rise here at home pic.twitter.com/EaFoxO9xqW
— Aaron Rupar (@atrupar) September 2, 2020


If you look at the MAGA faction's support of Trump, I think it's safe to say that "angel dust" has already been spread around.
— Mike DeAngelis (@MikeDeAngelis) September 2, 2020

Why isn't Biden talking about the dangers that soup cans pose to America?
— o.O (@JimEightDigits) September 2, 2020

BREAKING: Pence says he “doesn’t recall” if he was told to take over when Trump made his emergency visit to Walter Reed. Which absolutely confirms the story. Trump is unwell and completely unfit for office. #TrumpCancelsFootball
— Scott Dworkin (@funder) September 1, 2020

Question: As VP, were you ever told to be on standby... when President Obama was going in for a medical appointment? pic.twitter.com/s99Wph37n5
— Acyn Torabi (@Acyn) September 2, 2020

Biden says he’s preparing for the debate by going over everything the President has said and the lies he’s told. He goes on to say it would be great to have fact check ticker at the bottom of the screen pic.twitter.com/NVHMUV9Kw2
— Acyn Torabi (@Acyn) September 2, 2020


No, it actually is. I mean, it’s, like, the exact definition of racism. https://t.co/A2MpGVKDim
— The Hoarse Whisperer (@TheRealHoarse) September 2, 2020

AG Bill Barr tells Wolf Blitzer that he thinks the Jacob Blake shooting might’ve been justified because Blake was “armed” — then sticks with his analysis even after Blitzer points out that he was not in fact armed pic.twitter.com/FpBy3qMrYO
— Aaron Rupar (@atrupar) September 2, 2020

BLITZER: "Is it appropriate, though, for the sitting president to be accusing his predecessor, President Obama, and former Vice President Biden of committing treason?

BLITZER: "You've said you're worried a foreign country could send thousands of fake ballots... What are you basing that on?"

BARR: "As I've said repeatedly, I'm basing that on logic."

BLITZER: "But have you seen any evidence?"

After saying he's "received multiple reports" of protesters flying on planes to cause a riot elsewhere, Bill Barr demurs when pressed on Trump's antifa plane claims.

"I don’t know what the president was specifically referring to... he seemed to be speaking in general terms" pic.twitter.com/98bEMSyIME
— Justin Baragona (@justinbaragona) September 2, 2020


"If you don't allow police to do their job, then the American people have to defend themselves some way" -- Trump campaign spox Hogan Gidley defends the vigilantism of Kyle Rittenhouse, who has been charged with first-degree murder pic.twitter.com/iLmkbNZuI5
— Aaron Rupar (@atrupar) September 2, 2020

"It does raise a pretty good question, in that, how do all these people get into these communities? Who pays for their flights? ... it's a very coordinated effort" -- Hogan Gidley defends Trump's lunatic comments about caravans of antifa boarding planes and flying to protests pic.twitter.com/4xj2oSSRJS
— Aaron Rupar (@atrupar) September 2, 2020

"Does mispronouncing words qualify? I know Yosemite is not "yo-semite." You can count instances where the president has mispronounced words. Is that your standard for assigning mental acuity" -- @jimsciutto to Hogan Gidley pic.twitter.com/BNicNBK5aZ
— Aaron Rupar (@atrupar) September 2, 2020

GIDLEY: No one has more strength than Donald Trump. No one can keep up with him

SCIUTTO: How many times on the golf course, Hogan? Come on pic.twitter.com/UQkMS5AEhE
— Aaron Rupar (@atrupar) September 2, 2020