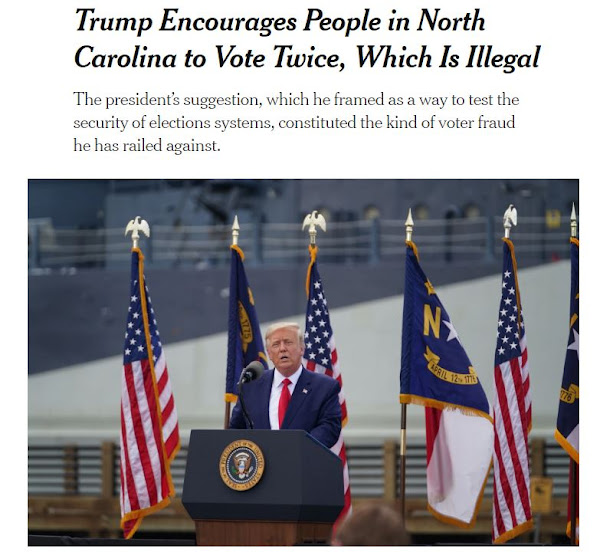 Mr. Trump encouraged people to send in an absentee ballot and then go vote in person on Election Day.
"Let them send it in and let them go vote, and if their system's as good as they say it is, then obviously they won't be able to vote," the president said. "If it isn't tabulated, they'll be able to vote."
"That's the way it is," he added. "And that's what they should do."
Voting twice in the same election is illegal.
But Mr. Trump's suggestion that people should vote twice is one he has discussed privately with aides in recent weeks amid concerns he is depressing turnout among his supporters by raising alarms about the security of mail-in voting.
As the number of people planning to mail in their ballots has increased, Mr. Trump has repeatedly made false claims about widespread fraud in mail voting. With his advisers trying to tell him that he's scaring his own supporters, including older voters, with his broad condemnations, he has sought to draw a distinction between universal mail voting and more limited absentee voting in which the person is away from home or has a disability. [No such distinction exists.]
But even as he has made such distinctions, he has continued to float wild theories about extensive voter fraud that are not backed up by evidence. He has repeatedly detailed far-fetched, seemingly manufactured stories about ballots being forged.

Pres. Trump appeared to suggest that his supporters should commit voter fraud by attempting to vote both by mail and in person pic.twitter.com/zcvdzYCY8x

Good thing he's a Republican, or that'd be illegal.

If you vote by mail then vote in person, they throw your vote out.

So he's trying to set this up. "They threw out A LOT of Trump votes.." - and he'll point to the vote in person but won't mention the vote by mail. Thus setting up his narrative of a "rigged election".

I'm thinking this falls under conspiracy to commit voter fraud which are both already on my list separately. I'm going to have to start color coding to combine them. pic.twitter.com/yV7E61z1uf