It is apparently impossible to find any "regular" Americans who are either (a) willing to appear in a Trump campaign ad or (b) are presentable enough to be used in a Trump campaign ad.
The Party of Trump has been having Republican operatives act like a multiethnic and multigendered most-certainly-not-a-member-of-a-Death-Cult and say how awesome The Chosen One has been and will be. 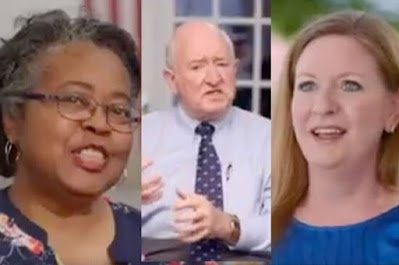 Fern A. Smith admits she would be "very scared if Joe Biden became president". However, she does not admit she is the Republican candidate running to represent Minnesota's District 51B.
Gizmodo reports that Smith, who is not identified in the ad:

has endorsements from the Minnesota Gun Owners PAC, the Minnesota Police, and Peace Officers Association, according to her campaign website. Smith also has the endorsement of Minnesotans For Affordable Health Insurance, a group that opposes Medicare For All and supports private health insurance. The group also opposed Obamacare in 2014 . . .
Curiously, there doesn't appear to be any mention of Trump on Smith's website, despite the fact that she's appearing in ads for him.

Steve Wenzel refers to the pandemic as the "China virus" and says Trump "is the right person for this nation's economy". Wenzel, who also is not identified by name, does not refer to himself as:

a delegate at the Republican National Convention in both 2016 and 2020 . . . "I was greatly honored to be again elected a delegate from Minnesota to the Republican National Convention and to be able, again as in 2016, to vote to re-nominate President Trump for a second term as our president," Wenzel said in a press release . . . "President Trump's leadership led our nation to a great economic boom and will again restore our economy . . ."

A Georgia newspaper, the Marietta Daily Journal recognized Sherk, which might be why these ads are running in states like California, Illinois, and Mississippi, according to the Facebook ad library, rather than her home state of Georgia.

Naturally, the ad never identifies Sherk as a political operative who has visited the White House.
Two months ago, the Trump Make America Great Again Committee was caught using videos of stock models, pretending these people are Trump supporters.

Tracey from Florida "could not ask for a better president" than Trump. However, this footage of "Tracey" is owned by Getty Images and has appeared in numerous videos for other organizations, and even in other countries. "AJ" is supposed to be a lifelong Democrat that finally came to his senses because the US "must secure its borders".
The disclaimer on these ads, in super-tiny text, states: "actual testimonial, actor portrayal". If "actual" people expressed these sentiments, why are they in the videos, speaking from their hearts?
Trump has millions of supporters who are willing to risk their lives to attend rallies and hear him drone on for a couple of hours. Why aren't they being used in these campaign videos?
Posted by allan at 10:58 AM