Donald Trump Is A Proud, Life-Long Racist, But He's Also A Coward And Won't Say It Directly 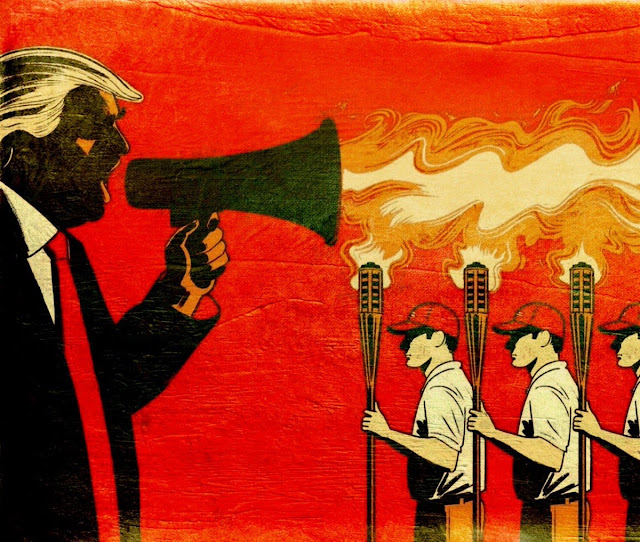 This is a cartoon from this morning's Montreal Gazette. Trump is a stain on America#TrumpIsARacist pic.twitter.com/tgcpKc4ygY

Here's Trump lying and saying "I don't know who the Proud Boys are." He doesn't denounce them. pic.twitter.com/B8QDfH17zI

After telling the white supremacist group, Proud Boys, to “stand down and stand by” during Tuesday’s presidential debate with Joe Biden

...Trump now claims he doesn’t know who they are.

We’ve heard this “I don’t know them” song and dance from Trump before. pic.twitter.com/75zCvWwdTj

This obvious lie is part of the Reality Buffet strategy:
1) Say a thing you want 2) Deny the nature of what you said and 3) the people who vote for you get to choose which Reality they want to feed themselves with. Our news media still has no strategy for it. https://t.co/54UiPG0TYb

Still Flatly Refusing To Do It

When the reporter followed up, asking if he would denounce white supremacists who support him, Trump responded, "I've always denounced any form, any form -- any form of any of that, you have to denounce. But I also -- Joe Biden has to say something about Antifa."

Within minutes of President Trump's mention of them during Tuesday's debate, members of the Proud Boys, a far-right group that has endorsed violence, were celebrating online, calling his comments “historic.” Some claimed to see a spike in “new recruits.” https://t.co/SLAEjcUxF1

"Antifa is a real problem" -- Trump on what he meant last night when he told the Proud Boys to "stand by" pic.twitter.com/B7B8dGE6gW

Q: White supremacists clearly love you. Do you welcome that?

I'm not racist, Im just #1 with racists!! Simpsons as always, predicted it. pic.twitter.com/OvmFzt14k5

New York Times Engages In Its Usual "Both Siderism" Before Printing The Truth In The Actual Paper, Calls The President Of The United States "The Biggest Threat" To The Country's Democratic System

They lead their email pull with a Biden quote... pic.twitter.com/dQ14KHBw8z

Bothsidesism at its most pathetic.

I'm sorry but this is even more grotesque. pic.twitter.com/Uyc25uoSih

My issue is also with the part that says “Trump denounced chaos in cities.” It should have said something about attacking peaceful protestors I think.

Even Chris Wallace acknowledged most of the interruptions and uncalled for commentary came from Trump. CHRIS FUCKING WALLACE!

This is big. The @nytimes goes there:

"the most direct threat to the electoral process now comes from the president of the United States himself." https://t.co/I9lCSSGEix

Top headline on @nytimes homepage: "Debate Showed the Biggest Threat to the Election Is Trump Himself..."

Shouldn't be lost on anyone how remarkable it is to see the paper of record calling out the President of the United States as the biggest threat to the democratic system. pic.twitter.com/9cNQ0AwgUn

All campaigns do post-debate spin, but this list from the Trump campaign is the most laughable purported fact check document I’ve seen in a long time. https://t.co/7JgubGJUJY pic.twitter.com/Hvy7B5kEA9

The President claims he saw polls that said he won the debate pic.twitter.com/CdkjhjXR6X

Oh yes he won...as stated in his email hours before the debate started. pic.twitter.com/wRiEwxOegZ

I guess he polled the voices in his head.

Can He Name Even Two Of Those Six Polls He "Looked At"?

Trump: "I thought the debate last night was great. We've gotten tremendous reviews on it."

Trump: "By every measure, we won the debate easily last night."

Trump: "We won the debate by almost every poll that I saw. If you look at the, uh, the various polls, I looked at about six of 'em, we won every one of 'em." (Trump lost handily according to scientific polls. He won some unscientific anyone-can-click polls on Twitter and such.)

The same thing happened in 2016: Trump was deemed the loser in scientific polls, his supporters flooded anyone-can-click polls, and he touted the results of the latter. https://t.co/odc6TZTN8J

Q: Are you preparing for a Joe Biden victory?

TRUMP: "There won't be" pic.twitter.com/IUIOG5tWZC

the way Trump conducted himself during the debate was “a national embarrassment” - @JoeBiden pic.twitter.com/yK1dUN7i2p

Question: Do you have a message for the Proud Boys today?
Biden: Cease and desist pic.twitter.com/nJVEGg5PKx

I'm now hearing that Biden's refusing to take a pregnancy test prior to tonight's debate. What's he hiding?

"When The Clown Shoe Fits"

Undecided Ohio voter on CNN panel, asked if Biden's "clown" remark bothered him: "He’s spent the last five years calling Elizabeth Warren Pocahontas... Is it great that Joe called him a clown, no. But when the shoe fits—when the clown shoe fits."

Santorum on @CNN: "It was a missed opportunity for Trump to show another side."

Narrator's voice: "There is no other side."

How Could Anyone Have Anticipated That Trump Would Ignore The Agreed-Upon Rules And Do Whatever He Wanted And Act Like A Spoiled Five-Year-Old For 90 Minutes?

Commission on Presidential Debates has issued a statement on last night's debacle: "Last night’s debate made clear that additional structure should be added to the format of the remaining debates to ensure a more orderly discussion of the issues." More changes to be announced...

“I never dreamt that it would go off the tracks the way it did,” Chris Wallace told our media reporter, @grynbaum, in his first interview since Tuesday night’s Trump-Biden debate. https://t.co/YKtY5ungV0 pic.twitter.com/84B7ytYU9D

I don't think Chris Wallace understands yet how much last night will forever define his career.