Round 1: Trump vs Biden 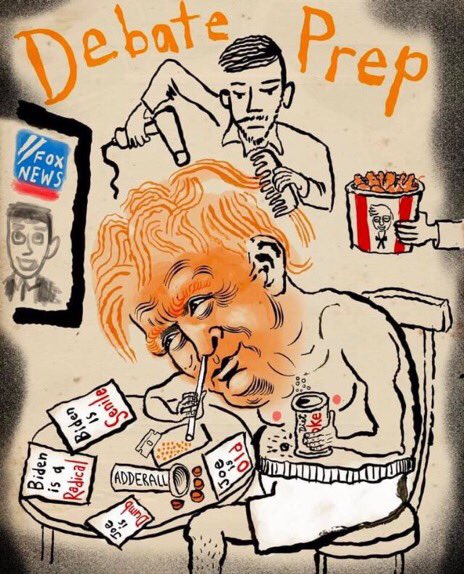 Chris Wallace has announced the topics for the first presidential debate, on September 29th:

The Trump and Biden Records
The Supreme Court
Covid-19
The Economy
Race and Violence in our Cities
The Integrity of the Electionhttps://t.co/SUpfGJYN5p

The conflation of race with violence is absolutely disgusting. Shame on Wallace and the commission.

Why did Chris Wallace publish the topics for first Presidential Debate? So Trump could learn something about each subject in advance?

Oh no. By Trump’s own rules, he’s now disqualified because he knows the questions

The Trump campaign keeps proposing ridiculous pre-debate inspections to feed conspiracy theories, and Fox News plays them all up. pic.twitter.com/vIJN5W1LUN

Based on what I’m seeing on Twitter it appears the debate has been canceled and Trump now wants to do live searches of Biden’s orifices on TV. Do I have that right?

The President suggests his opponent will receive an injection of performance enhancing drugs “in the ass” before the debates pic.twitter.com/sXOGjrFltp

"They'll give him a shot of something ... we want a drug test" -- Trump accuses Joe Biden of juicing like Barry Bonds circa 2002 or something pic.twitter.com/M3Ym0AuwAd

The President again suggests his opponent will receive an injection of drugs before the debates and calls for a drug test pic.twitter.com/V7hY8zTusE

I will be strongly demanding a Drug Test of Sleepy Joe Biden prior to, or after, the Debate on Tuesday night. Naturally, I will agree to take one also. His Debate performances have been record setting UNEVEN, to put it mildly. Only drugs could have caused this discrepancy???

"A lot of people have said that, a lot of people have written that ... just check out the internet, you'll see" -- Trump tries to provide evidence for his claim that Joe Biden is on performance enhancing drugs pic.twitter.com/SVuSI8zdVM

"But I think it’s reasonable to ask if he’s taking medications to help him with his alertness and his memory." pic.twitter.com/HFqtBgsjKB

This is a re-run pic.twitter.com/Gku6uSWBSG

Trump Criticized Biden For Preparing For Tonight's Debate
(Whereas He's So Busy Running the Country, "I Don't Have That Luxury")

"He puts a lid. I did not know what the hell a lid is & I have only been doing this for 3 & a half years...he's lidding up...they'll give him a big shot & he'll go out there - Trump devotes multiple minutes of his speech to attacking Joe Biden for spending a day doing debate prep pic.twitter.com/jNjzPNtTC5

This is the second time tonight I’ve seen Fox News attempt to prep the President for the debates pic.twitter.com/jUXMuccepV

why would he need a response to something he’s handled perfectly that is also a hoax and going away https://t.co/CyL5Xt04GE

Trump: "The way she was helping him along with those it was so obvious what was going on. She was helping him. She was giving him a question and then helping him to answer the question. I know her very well. ... It was embarrassing and people don’t talk about it. ..." 1/2

"The answers where he wasn’t able to give an answer and she’s pushing him. She’s pushing him. They never do that with me, I can tell you, but I don’t have the kind of problems he has. ... You can’t have a president that needs that kind of help." 2/2 https://t.co/e32HcSoIQv

Shortly after former vice president Joe Biden clinched the Democratic Party's nomination for the 2020 presidential race, President Trump and his allies invested heavily in a particular line of argument. Biden was old and enfeebled, they asserted, and could barely function physically or intellectually.
Over and over, they made this argument, even releasing ads compiling snippets of Biden stumbling over words. There was no small irony to attacking Biden as old or prone to misstatements, of course, but it was the strategy they dropped like a blanket over the political conversation.
Then the Democrats held their convention and Biden was obviously not the caricature that his opponents had suggested. So Trump pivoted: Clearly, then, Biden was cheating.
Over and over again, this was the mantra. Biden was using performance-enhancing drugs of some sort, Trump claimed, demanding a drug test. It's an extremely weird claim, presuming that Olympic-style rules should apply to everyday situations, and one without any evidence. (At a news conference on Sunday, Trump insisted that the claim could be proved if one were to "check out the Internet.")
As Tuesday's debate neared, the claim got more specific: Biden would be using an earpiece during the debate to take instruction from aides and allies. As of writing, it's the top story on Fox News's website . . . Trump's campaign demanded that Biden reject the use of drugs and earpieces, a request that Biden laughed off. . . .
[T]his mirrors the Trump campaign's election strategy more broadly.
What Trump's team wants to do with these allegations is twofold. First, they want to disparage Biden as a cheater and untrustworthy. Second, they want to have an excuse for Biden doing better than Trump's supporters might expect. That exchange in which Biden damaged Trump? Well, that was just because he had an earpiece or was on Adderall.
This is precisely what's happening with Trump's focus on mail-in voting. He and his allies are broadly asserting that such ballots can't be trusted, despite the complete absence of evidence that there's any broad effort to rig voting and the absence of evidence that any such scheme could work. Trump keeps insisting that Democrats are actively promoting absentee voting so the election can be stolen — a clunky effort to impugn his political opponents as cheats.
But, then, there's that second reason: Insisting falsely that mail-in ballots are rife with fraud gives Trump an excuse for any loss. . . .
What he's doing with the debate and what he's doing with the election are the same thing. In each case, he's asserting that his opponents cheat, and in each case, that gives him the space to claim victory regardless of the outcome. Of course, we shouldn't be surprised by this. It's how Trump approaches politics in general, wildly disparaging his opponents and injecting as much uncertainty as possible about objective facts.

It also fits Trump's incessant and very transparent habit of projecting his own crimes and fears onto others. In this case, Trump is the drug-using, gaffe-prone, vote-fraud-causing candidate with dementia.
Trump Has Been Claiming Biden Has Dementia
(A Case Of 'Takes One To Know One'?)
Trump recently bragged on live television (on multiple occasions!) about passing a test meant to detect signs of dementia. (He has not said why he was given that test.)
Over the last four years, there have been countless instances of Trump committing some gaffe or broadcasting his extraordinary ignorance about extremely common matters.
Trump has trouble operating a speaker phone. He has been defeated more than once by an open umbrella. He says he has met with the president of the Virgin Islands and the Prince of Whales. He implied that both Frederick Douglass (who died in 1895) and Thomas Edison (who died in 1931) were still alive. He stared directly at the sun during an eclipse.
Trump thinks (still, in late 2020) that stealth planes are actually invisible. He believes testing for COVID-19 creates cases. He believes hurricanes can be stopped with nuclear bombs. He tweeted about a "taco bowl" in celebration of Cinco de Mayo. He described Puerto Rico as "an island sitting in the middle of an ocean—and it's a big ocean, a really, really big ocean". In May 2019, Trump misspelled "stolen" as "stollen", which is a type of fruit bread served in Germany on Christmas.
When welcoming his wife home after she spent five days in the hospital for kidney surgery, Trump called her "Melanie". He blamed the Kentucky Derby results on "political correctness" and referred to the state as "Kentuky". In his 2019 Fourth of July speech, Trump spoke of the American troops who "took over the airports" during the Revolutionary War and later blamed a telepromoter that had stopped working (why would a non-functioning teleprompter force Trump to talk about airports existing in the 1770s?). In October 2016, Trump told a crowd in Panama City, Fla., that Election Day was November 28. (It was November 8.)
In September 2019, he misspelled "little" as "liddle", "describing" as "discribing" and did not know the difference between a hyphen and an apostrophe. Trump copied an anti-Semitic image used by white supremacists of a six-point star and piles of $100 bills to depict Hillary Clinton, then blamed the "dishonest media" for the controversy. He retweeted a quote from fascist dictator Benito Mussolini. When Trump arrived in Scotland the morning after the "Brexit" vote, he tweeted: "Just arrived in Scotland. Place is going wild over the vote." (Scotland had voted overwhelmingly to stay in the EU.)
During an interview with the editorial board of The Washington Post in 2016, Trump hit on an editor, discussed his glove size, and avoided a question about ISIS by saying "I'll tell you one thing, this is a very good looking group of people here." He congratulated the state of Kansas City after the Kansas City Chiefs won the Super Bowl (the Chiefs play in Missouri).
Trump has referred to the day the World Trade Center towers were destroyed as "7-Eleven". In April 2020, Trump tweeted "Happy Good Friday". In August, he tweeted about his visit to "Frorida" (the l is nowhere near the r on a keyboard). Also during that month, he mispronounced (twice) one of the US's most famous national parks as "Yo-Semite", stated the 1917 influenza epidemic caused the end of World War II, and claimed that vote-by-mail ballots were being sent to dogs. (The influenza epidemic occurred in 1918, World War II ended in 1945, and as long as the dogs don't mail back the ballots, what's the problem?)
Trump has coined numerous new words, phrases, names, and countries: chocked, hamberder, Nipple and Button, Nambia, text massages, Global Warning, covfefe, the US will heel itself, lasting peach in the Middle East, unpresidented, elements of medical, smocking gun, Tim Apple, what are the oranges of that.
He has also misspelled his own last name in tweets, twice: "Ttump".
Trump Hired A "Faux-Bama", So He Could "Ritualistically Belittle" And Fire The First Black President

“We even hired a Faux-Bama, or fake Obama, to record a video where Trump ritualistically belittled the first black president and then fired him, a kind of fantasy fulfillment that it was hard to imagine any adult would spend serious money living out”(24)

I can’t wait for the 1st debate where @JoeBiden’s calm demeanor, decency and rational thinking will be on display against @realDonaldTrump’s endless stream of disjointed rambly nonsense, mixed in with slurring, bizarre body spasms, insane lies, and unhinged lunacy.

“Trump told me that America intervenes in other country’s elections all the time, even overthrowing regimes in places like Afghanistan and Iraq, so what was wrong with the Russians trying to influence the American election?”(31)