Trump Bloviates: Inventing Grandiose Achievements, Reveling In Police State Violence, Spewing Racism, Threatening To Jail His Opponents, And Praising Both A Treasonous General Who Waged War Against The US & A Slave-Owning President Who Committed US Genocide (And He STILL Thinks Stealth Planes Are Literally Invisible!) 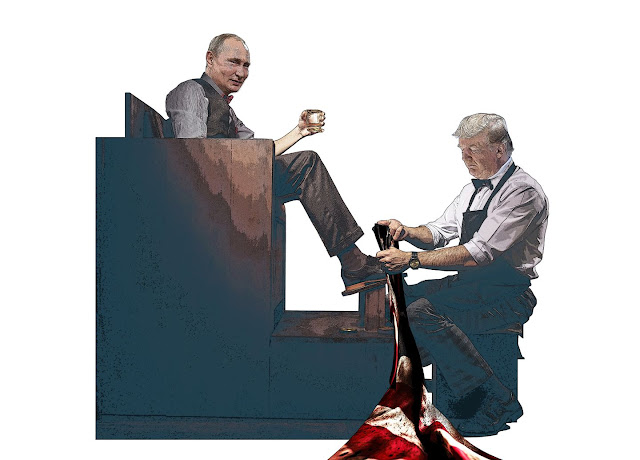 Amid disputes between Pres. Trump and his own officials, including CDC Dir. Redfield and FBI Dir. Wray, @jonkarl asks, "How is it that you don't trust your own experts? Do you think you know better than they do?"

"Yeah, in many cases I do," Trump says. https://t.co/x0teHMTwXG pic.twitter.com/9ZccuiW4FF

The Trump Superspreader Tour 2020 has come to Bemidji, Minnesota, tonight. Follow for a video thread. pic.twitter.com/ObYsp1b8l9

People don't seem to remember this because it never happened pic.twitter.com/Kc2LbcJnt1

"Are you having a good time with your refugees?" -- Trump immediately pivots to full blown racism pic.twitter.com/ds9UEpLf9v

"This is a protest. It's a protest against stupidity" -- Trump just murdered irony pic.twitter.com/Y9K6QwnUAg

"You wouldn't have Minneapolis. You better remember this when you go vote" -- Trump takes credit for Gov. Walz deploying the National Guard to Minneapolis pic.twitter.com/NrfBoGjat0

"It was the most beautiful thing ... it's called law and order" -- Trump gloats about @AliVelshi getting hit by a rubber bullet in Minneapolis. Sick stuff. pic.twitter.com/bgKSmmL8O7

"She spent $2 million on bullshit, okay? And if a Republican did that, they'd be in jail" -- Trump insinuates that AOC should be in prison pic.twitter.com/gL9NhLcRiC

"You saw the head of the FBI yesterday go, 'Russia, Russia'" -- Trump throws FBI Director Wray under the bus pic.twitter.com/TdY9w51nf2

"I do believe they're in the FBI" -- Trump suggests that the FBI is protecting Hillary Clinton by storing her deleted emails somewhere where he can't find them pic.twitter.com/yKkSNk70R4

Big "lock her up!" chants as Trump continues to rail against Hillary Clinton and how "angry" she makes him pic.twitter.com/2wvfYc4sSE

"Look at Omar. She came in here, did she marry her brother?" -- Trump pushes unfounded conspiracy theories about Rep. Ilhan Omar pic.twitter.com/syxg0nm9oy

Trump threatens to pull licenses from NBC and CNN, even though they don't have licenses pic.twitter.com/sLVDZijcAS

"[Lincoln] was getting beaten a lot by Robert E Lee. They want to rip down his statue all over the place ... he would have won except for Gettysburg ... these were incredible things" -- Trump praises the top general who fought on behalf on slavery pic.twitter.com/7dnzZ9nQJV

"They charged and they beat the hell out of these guys" -- Trump praises law enforcement for brutalizing people who allegedly were trying to tear down a statue of Andrew Jackson, who he describes as "a very good president" pic.twitter.com/MexuqfLfyG

"I could right now be having a very beautiful life of luxury, and here I am at a hangar in Minnesota" -- Trump pic.twitter.com/dBeVRc2um9

Trump, who's reveling in being off-prompter, does a weird stream of consciousness bashing Joe Biden for various things pic.twitter.com/GmmDUi4ZCJ

"You can't see it ... when you fight, they cannot see us" -- Trump still seems confused about whether stealth planes are literally invisible pic.twitter.com/Ry7z0ziPjx

Trump tosses some red meat to his QAnon base by talking about human trafficking, as cries of "save our children!" are heard from the audience pic.twitter.com/oi5ErvwPPI

Trump on what will happen if he loses the election: "On November 4th, the press will probably say -- let's say something stupid happened -- the press will say, 'I gotta admit, he did a damn good job!'" pic.twitter.com/UA2cPHFH5V

if a guy at the bar was telling you stories like this (back when society existed) you'd quietly pay your tab and sneak out pic.twitter.com/xO2YZA7hNN

"Shake their hand, everybody sign a slip that you're voting for them, please" -- is Trump trying to kill these congressmen by having them shake the hands of thousands of people? pic.twitter.com/tfxDetREiv

Trump seems completely unaware that he is now the incumbent, not an outsider running to change things in Washington pic.twitter.com/zpFQ6JhxoD

"We will stop the radical indoctrination of our students, and restore patriotic education to our schools. We will teach our children to love our country" -- maybe he could call it the Trump Youth? pic.twitter.com/PVjMg39PyP

The BEST you can say about elected Republicans at this point is that they're the most lily-livered, cowardly, chickenshit politicians in world history.

The worst, of course, is that they are all monsters just like Trump. https://t.co/qlZXmRxNlv

She’s been dead for like what? Four hours? Five hours? https://t.co/mb33ycvPHS

Mitch McConnell releases a statement indicating he will likely seek to push through a nomination as soon as possible. pic.twitter.com/HHfwQWC88s

someone call a doctor, Fox News has an erection that’s going to last a lot longer than 4 hours https://t.co/bbq2N4fL0o

The fact that every household in the US almost got 5 masks in the mail in April, until the WH killed it, ought to be a screamer headline everywhere. What other story hits home like that? https://t.co/vhDwUltGrQ

This tweet has gone viral because common sense says 5 masks per household in the mail in April would have saved countless lives and misery.

But the story is almost nonexistent in the MSM. Even WaPo didn't front-page it. And not a peep from AP, NYT, the networks.

Trump is saying his usual nonsense about mail voting. Not even worth repeating. It’s all wrong all the time.

“Everybody knows I’m right,” Trump says after being thoroughly wrong.

On a lot of subjects, Trump mixes his lies in with some actual facts. On mail voting and election integrity in general, literally almost everything he says is wrong. https://t.co/Vl1T6YWIfx

215 million Americans would need to be infected with the coronavirus to reach herd immunity, a strategy Pres. Trump has said would make the virus "go away."

Trump's Free Ride From The Mainstream Media Has Never Ended

Trump: It's fine if all blue states die of covid
Media: Speaking directly to the heartland again, I see

Biden: I'm a Scranton Dem, not a Park Avenue Dem
Media: wHy ArE yOu So DiViSiVehttps://t.co/xYdTkrGDhR

"Because the press is obsessed with stories about Trump supporters who continue to support Trump, it’s easy to forget how deeply unpopular he is." https://t.co/jjODbYExFK