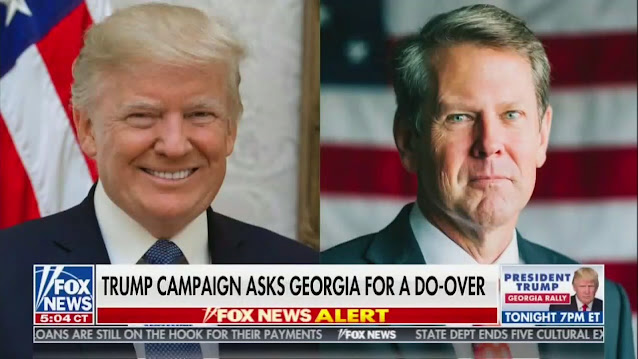 "Any of the rallies that you go with President Trump, they are extremely emotional because they are so inspiring" -- 😂😂😂 pic.twitter.com/ZEzahs5B26

This 100 percent never happened. The Fox News anchor is making stuff up. pic.twitter.com/TnuDXdccen

When you and your allies are 1 - 46 in court pic.twitter.com/PplAhS4cPF

Vox's Aaron Rupar posted 56 video clips from Trump's stand-up routine in Georgia on Saturday.
Here's a few of them:

Trump declares victory in the (fake) War on Christmas pic.twitter.com/4bewITAPIg

Trump tries to express sympathy for Covid victims but can't help but immediately transition into bragging about how he helped the vaccine process. Then he falsely claims "a lot of people already are vaccinated." pic.twitter.com/4kClJPElG5

"They want to go into a communistic form of government" pic.twitter.com/JE4KK2EBxk

Trump reads from printed-out sheets of paper that he says contains "facts" that are "like, irrefutable. And it means win." This is supposed to prove that the election was stolen from him. pic.twitter.com/bnyd4O4Tcf

"They even want to take away your beautiful Christmas that we just got back" pic.twitter.com/r2FZ1Lg05p

"If I had it to do again I think I would've sent the military in, to know the truth" -- Trump on last summer's Black Lives Matter protests pic.twitter.com/FywCdSKVtU

"I like cucumbers" -- this speech has gone bizarre places pic.twitter.com/RehhhrPd8r

"Hopefully our legislatures and the United States Supreme Court will step forward and save our country" -- Trump pic.twitter.com/CbGHlbO9it

"Everything that we've archived is on the line on June 5th," Trump says, referring to an election that's in January pic.twitter.com/zEqvarF0XJ

"We have made America safe again," Trump says, wrapping up his speech on a day when nearly 2,500 Americans died from the coronavirus pic.twitter.com/YCnAnSydU3

Alt- title: ´Between a cock and a charred place’

Judge box of whine is real mad at Bill Barr