The Frenzied Final Days Of Trump's Death Cult: His Campaign Lawyer Calls For The Murder Of The Homeland Security Official Who Said Election Was The "Most Secure" In History; Trump Becomes The First "Lame Duck" President In 131 Years To Order A Federal Execution 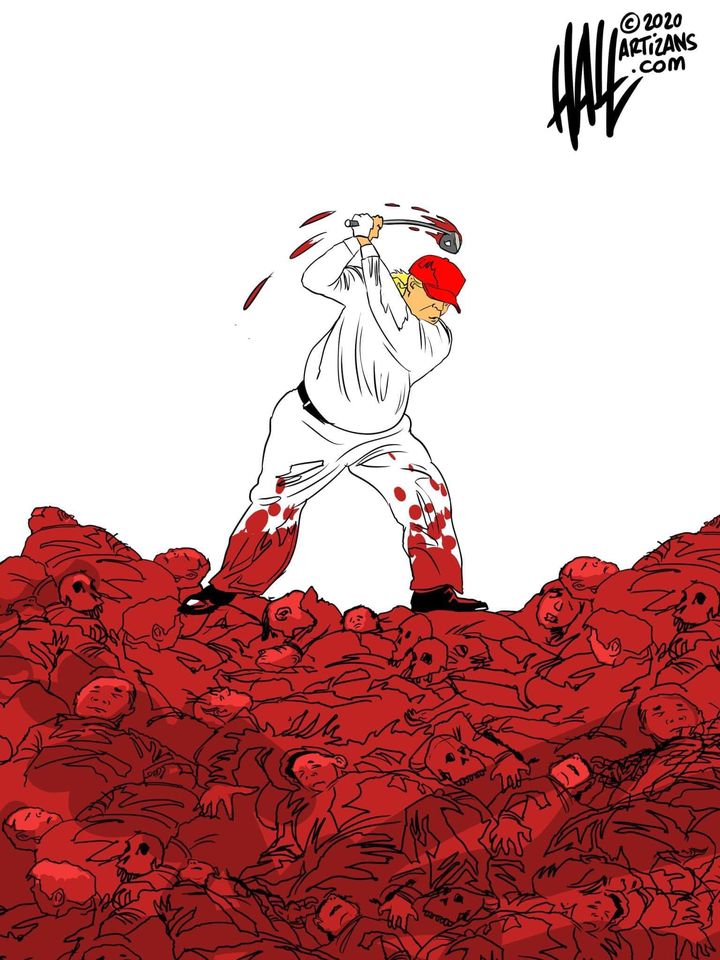 In the aftermath of Joe Biden's decisive victory over Donald Trump in the 2020 election last month, Chris Krebs, Director of the Cybersecurity and Infrastructure Security Agency in the Department of Homeland Security, described the election as the "most secure in United States history".

DiGenova, in an interview with Newsmax's Howie Carr (video):

Anybody who thinks that this election went well, like that idiot Krebs who used to be the head of cybersecurity [for Trump]. That guy is a class A moron. He should be drawn and quartered. Taken out at dawn and shot.

Tim Miller of The Bulwark writes:

This is not just a random Parler troll trying to get attention. This is an attorney speaking on behalf of the President of the United States' re-election campaign. And while it may read like a macabre joke, the direct nature of diGenova's comments make it impossible to interpret as anything other than a real wish/threat against a public servant for offering truthful testimony.

DiGenova is actually the second person in Trump's inner circle to call for the murder of US public officials since the election. On November 5, Steve Bannon, the former White House chief strategist, suggested beheading Dr. Anthony Fauci (director of the National Institute of Allergy and Infectious Diseases) and former FBI Director Christopher Wray. Bannon said putting their severed heads on pikes outside the White House would serve "as a warning . . . You either get with the program or you're gone".

As the countdown of Trump's remaining days in the White House continues, Trump seems to have death on his mind. He is rushing to execute an unprecedented number of people before Biden is inaugurated.

The Death Penalty Information Center reports that the Trump administration has executed eight people by lethal injection since July. On November 19, Trump oversaw the first federal execution under a "lame duck" presidency in 131 years (Grover Cleveland, in 1889). Mike Ludwig of Truthout reports there are five more executions scheduled before January 20, including Lisa Montgomery, "a survivor of extreme sexual violence who suffers from mental illness and would be the first woman to be executed on the federal level in nearly six decades".

Trump's death obsession has often been focused on nursing homes, which have suffered a disproportionate number of COVID deaths. The Trump administration provided only a limited number of free tests and many nursing homes have had to wait several days for test results. In late October, the Washington Post reported more than 43,000 nursing home residents died of COVID-19 in facilities that the Trump administration had cleared of any infection-control violations. The inspections were bullshit, of course.

Those cleared included homes with mounting coronavirus outbreaks before or during the inspections, as well as those that saw cases and deaths spiral upward after inspectors reported no violations had been found, in some cases multiple times. All told, homes that received a clean bill of health earlier this year had about 290,000 coronavirus cases and 43,000 deaths among residents and staff, state and federal data shows. (emphasis added)

In September, Trump continually lied when he said children were not at risk for the virus and schools should be open. (In the last two weeks of July, more than 97,000 children tested positive for the coronavirus, according to the American Academy of Pediatrics.) Almost as soon as schools began admitting students, they were overrun with cases and had to be closed down again.

[T]he media's preferred storyline that suggests Trump is simply incompetent doesn't add up because Trump has made the wrong decision every single time in terms of how crises like this are supposed to be dealt with. . . . It's increasingly not believable for the press to suggest Trump has been distracted or inept during this crisis, in part because of the level of White House uselessness has become so staggering. . . .

Boehlert was alarmed that no one in the press was "asking the difficult questions and pondering what the Trump presidency is truly about". These "truly alarming questions about Trump and his motives" needed to be asked: "Because we still don't know why he essentially ordered the federal government to stand down for the virus invasion."

Late in 2019 and early 2020, Trump was informed of the risks of the coronavirus numerous times. He was explicitly told there was a risk that hundreds of thousands of Americans could die. Trump did nothing. In fact, he deprived numerous states of essential medical supplies, even demanding that armed government goons hijack vehicles (hired by the states, acting on their own) and steal the supplies. He waited several months before placing orders for ventilators, masks, and other equipment. He has never stopped downplaying the severity of the virus; he has claimed more than 40 times that it would magically vanish on its own; he claimed masks were useless; he was reluctant to send any emergency funds to Americans (and he deliberately delayed delivery of those checks); and he held numerous rallies that have led to more than 700 deaths. When Trump leaves office in seven weeks, the true US death toll (in only 10 months) could be close to 400,000.

When the number of 100,000 corpses was met and quickly surpassed in late May, it prompted numerous articles about how the country had come to that horrific point, but as Boehlert pointed out, those articles never truly examined the man who was ostensibly in charge of the country's response and gauged his fitness for office. There was much less of a fuss in September, when the 200,000 milestone was passed. The US could top 300,000 by Christmas. Will anyone really notice? 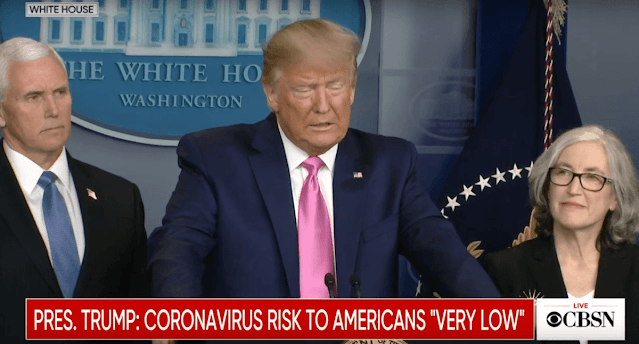 Psychologist and psychotherapist John Gartner taught for many years at the Johns Hopkins University Medical School. He believes Donald Trump is a malignant narcissist and a sadist who is addicted to engaging in "democidal behavior". Earlier this year, Gartner told Salon that the skyrocketing death toll is the logical outcome of Trump's mental pathologies.

People such as Trump are malignant-narcissist sadists because they, at some deep level, are driven to cause harm to other people. Trump's life is proof of this. He enjoys ripping people off and humiliating people. He does this manically and gleefully. . . . He threatens people online and elsewhere. I believe that Donald Trump is also a sexual sadist, who on some basic level enjoys and is aroused by watching people be afraid of him. In his mind, Trump is creating chaos and instability so that he can feel powerful. . . .

Donald Trump knows exactly what he is doing to the physical and emotional health of the American people. . . . If you look at human history there is one trait that all malignant narcissistic leaders have in common: They kill mass numbers of their own people. Why would Donald Trump be any different?  . . .

Malignant narcissists like Donald Trump view other human beings as kindling wood to be burned for their own personal enrichment and enlargement and expansion. . . . Malignant narcissistic leaders kill many of their own people through wars and political terror, but also through willful incompetence. . . . Causing harm is a type of addiction for them. Donald Trump's addiction is only getting worse. Donald Trump is a human predator. That is what he does. He will not change. . . .

Make no mistake. Donald Trump is going to find a way to attack and cause great harm to the American people if he believes that he will lose the 2020 election.

Donald Trump can and should be compared to leaders such as Adolf Hitler. At this point, the country is really at the endgame with Trump — we are getting closer and closer to the bunker moment. Donald Trump is not just incompetent. He's not just delusional. He is not just narcissistic and doesn't care about others. Donald Trump's behavior with the coronavirus pandemic is intentional. He is malevolent. He is a first-degree mass murderer. This is a plan.

I am a great believer in the principle of Occam's razor. The simplest explanation is usually the right one. Trump disbanded the pandemic task force. First, Trump said that the virus was not going to come to America. Then he chose not to do more testing. Trump chose to not use the Defense Production Act to make more needed medical supplies and equipment. Trump has admitted to trying to slow down the testing for the coronavirus. Trump has undermined the governors' efforts to protect the public from the virus. Trump even went so far as to encourage astroturf protests to intimidate Democratic governors into reopening for "the economy." Trump has said that he is against people wearing masks — which is the simplest, cheapest and most efficient way to keep us from spreading the virus. Trump is trying to open the floodgates. He's hosting mass gatherings of people at his rallies and other events. He's doing everything he can to enable the virus.

Suicidal self-destructive behavior as a sign of loyalty to the Great Leader is a tradition among malignant narcissists. Leaders such as Trump are so unwell that if the people around them and their followers are not stoking their egos then a Trump-type person will turn their rage outward. . . . One of the ways that a Trump or Hitler-type leader does that is to try to make people show loyalty by doing things where they knowingly harm themselves.

The idea that one would lead your own followers to their deaths is not unusual in the broader context of history. . . .

There is a narrative that Donald Trump is crazy, delusional, selfish, and cognitively disabled. Of course, that is true. But Donald Trump is not so stupid that he does not know the consequences of not wearing masks at a large gathering of people. Trump knows what the effect of that will be. Trump has been briefed repeatedly about how not wearing masks will lead to mass death. He knows that. Trump has consciousness of guilt. He understands the cause-and-effect relationship between his behavior and all the people who are dying in this country from the coronavirus pandemic. . . .

[He] truly does not care if he's killing massive numbers of children. Such an outcome does not upset Donald Trump. He is more upset by some idle comment made on Fox News. The deaths of children and other people do not have any emotional meaning to him. . . . [K]illing large numbers of people actually excites and arouses Donald Trump. It all makes him feel powerful. That excitement and arousal and empowerment is an antidote to the emptiness that he feels inside and to the humiliation and mockery that he is experiencing from his critics and the public. . . .

[W]hat was Trump's message for Independence Day? All the people who do not praise me are bad. They're evil. They're left-wing troublemakers. All those people who don't praise me want to destroy this country . . . Donald Trump takes a perverse pleasure in destruction — and that destruction is the destruction of the American people, the country, our way of life, our actual lives themselves. Donald Trump is reveling in our destruction and our deaths. . . . Donald Trump declared that anyone who does not support him is an enemy of America who should be destroyed. Trump is not kidding. He is not making a "harmless joke." He is deadly serious. . . .

[If Trump is] defeated at the polls, he still has two months between Election Day and supposedly stepping down in January. These months up to Election Day and then to January will be some of the most dangerous in the country's history. Trump is capable of anything. . . .