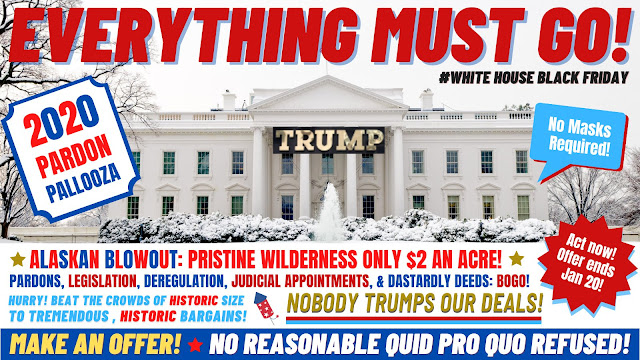 If a US President could pardon himself, he would be supremely above the law.
Imagine: He could rob the treasury of billions, sell fighter jets and nuclear bombs to multiple terrorist groups and deposit the cash in his personal bank account, and murder the entire Supreme Court. Then all he has to do is announce that he has pardoned himself, and walk away a free man.
It's just the latest chapter in the Unhinged Lunacy saga.
Today's Crimes

This is a criminal enterprise masquerading as a presidential administration. We voted them out. Now we must hold them accountable. #TrumpCrimeFamily pic.twitter.com/Gxe8CieboP

NEW: After FOIA requests by news agencies including NBC News, SBA released more PPP data. Initial analysis from our team shows over 25 PPP loans worth more than $3.65M were given to businesses with addresses at Trump and Kushner real estate properties https://t.co/UzEGWxss72

Trump Hotel in Panama Linked to Accused Fugitive Fraudster Said to Have Ties to Money Launderinghttps://t.co/VaC68dRd35
BY BEATRICE DUPUY ON 11/17/17 AT 12:41 PM

Ivanka Trump sat for a deposition Tuesday with investigators from the Washington, DC, attorney general's office as part of its lawsuit alleging the misuse of inaugural funds, according to a court filing https://t.co/4QAj8v9VfM

Trump and His Children Accused of Investment Scams in Lawsuithttps://t.co/G202qKIXZU

If you’ve been frustrated by the lack of consequences for violations of the Hatch Act, the dangerous nepotism in the White House, and the challenges with enforcing the Emoluments Clauses, CREW’s new report will show you what needs to be done. https://t.co/8bywJPy1SB

Background:
Trump used $258,000 from his charity to settle legal problems.https://t.co/QAeGgeWOOZ

That's the first time I've ever seen "avoid extradition" phrased as "maintain his visibility" but sure. #trumpcrimes

This is how Bill Barr wants to spend his last days in office - rushing frantically to find new ways to execute Americans even as thousands die each day from Covid-19.https://t.co/YayCyFeNP9

I feel like the presidents recently pardoned former national security advisor calling for a military coup and martial law to overturn an election should be bigger news.

Of course Trump thinks a Biden DOJ will go after his kids as retribution. After all, he and his children have been working to destroy Hunter Biden for years now. He assumes they will do what he would do.

Tiffany is going DOWN! https://t.co/d6suxYjxqR

The just lie reflexively. They are all psychologically damaged people. https://t.co/RCvRDJNB6F

"I've heard no mention of any pardons in any conversations I've had in the White House, other than Flynn" -- McEnany distances herself from the pay-for-pardon scandal pic.twitter.com/q98Pz0RXZH

McEnany, who works for the Trump campaign, redirects questions she doesn't want to answer to the campaign pic.twitter.com/xPnAVjdsjV

"It's the Trump vaccine" pic.twitter.com/MTFff7sQfk

The Trump Vaccine was administered by 81 million people on November 3rd.

I wish I received a trump vaccine four years ago.

Totally on brand. Trump trying to slap his name on someone else’s hard work.

Kayleigh McEnany admits that Trump is threatening to veto the NDAA because Twitter fact checks him. pic.twitter.com/LDLjLePPRV

"I'd point you to the campaign for specific questions on this" -- a member of the Trump campaign pic.twitter.com/PVrgZUbBz4

"There's no place for violence. What I will say, though ... " pic.twitter.com/hy6lIfuZHW

McEnany's example of Trump making public comments about the coronavirus is a press conference he held two weeks ago pic.twitter.com/ugIgyZIEFR

Really leaning into being the sorest loser in American political history — the full video is 46 minutes long and chock full of lie after lie after lie https://t.co/WpJWtKfKl9

"For the first time in America's 244-year history, we have no president. Since the election, Trump's schedule has been virtually empty though there has been plenty of golf & tweeting." @djrothkopf on a fitting closure to Trump's kakistocratic reign. https://t.co/5YyNjQqX0e