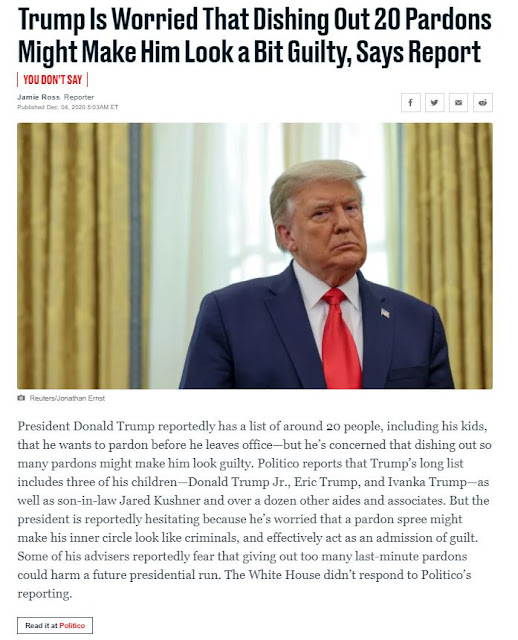 Now why would anyone think that?

Trump Mulls Preemptive Pardons For Up To 20 Allies, Even As Republicans Balk
Anita Kumar and Andrew Desiderio, Politico, December 3, 2020

President Donald Trump is considering preemptively pardoning as many as 20 aides and associates before leaving office, frustrating Republicans who believe offering legal reprieves to his friends and family members could backfire. . . .

Those up for clemency include everyone from Trump's personal attorney, Rudy Giuliani, to several members of his family — all people who haven't been charged with a crime. Weighing on Trump's mind is whether these pardons would look like an admission of guilt.

Republicans, as they often have when Trump appears about to bulldoze through another norm, are expressing some initial hesitation — but they're not telling him to stop. . . .

The GOP is grappling with how closely it wants to remain aligned with Trump after his presidency. . . .

Trump has not made any decisions about pardons as he and his team contemplate both the legal considerations and political consequences, according to three people familiar with the discussions, all of whom speak to the president. Some around Trump are worried the president could tarnish his legacy . . . if he's too expansive with his 11th-hour pardons.

Roughly 20 top aides and associates are on tap for a potential pardon, though the list is evolving, according to one of the people. The list includes Donald Trump Jr. and Eric Trump, who run the family's namesake business, and Ivanka Trump and Jared Kushner, a husband-and-wife duo who are both senior aides at the White House. . . .

Trump is hesitant to pardon any of them, particularly Giuliani, because it may appear that members of his inner circle are criminals, said one of the three people, who spoke to Trump this week. The Giuliani pardon has been discussed more seriously, the person added. . . .

[T]he clemency would not extend to any state charges, congressional investigations or lawsuits — of which there are plenty.

The New York attorney general and the Manhattan district attorney, for example, have been investigating the Trump Organization for possible financial fraud. D.C. authorities also sued the Trump Organization and Trump's inaugural committee, alleging the committee misused funds and funneled money back to Trump's company. Ivanka Trump gave a deposition in that suit earlier this week.

GIULIANI: "Don't pardon your kids. They're all conspiring against you. Eric testified in New York. Ivanka testified in DC. Pardon me. I'm the only one you can trust."#IvankaForPrison #TrumpCrimeFamily #TraitorTots #LockHerUp pic.twitter.com/XDG2nv8y6E

BARR: What idiot suggested you should pardon Ivanka? Was it Hannity? Don't tell me you're listening to Giuliani again? Hasn't he gotten you into enough trouble?#IvankaForPrison #TrumpCrimeFamily #TraitorTots #LockHerUp pic.twitter.com/7vtbAj7z8X

CHRISTIE: Donald, if you pardon your kids, they will be forced to testify against you. And they will. You've trained them to be selfish. You know them. They would bury you. You cannot be this stupid. It would be the dumbest thing you could do.#IvankaForPrison #TrumpCrimeFamily pic.twitter.com/ASzt9z9S4X

There is no way that Trump wrote that tweet. He couldn't spell excoriated if asked.

Over a period of a week, national broadcast news shows only mentioned relief bill negotiations 12 times total, with just one mention on a flagship evening news show.

Seen a ton of tweets on science behind keeping restaurants closed. This came out last week from South Korea, where contact tracing is meticulous and often invasive.

“Eating indoors at a restaurant is one of the riskiest things you can do in a pandemic."https://t.co/hSiuH6cT3G

At least 9 police break down this woman's door and then stand around with their body cameras filming as she sobs, completely naked. It was the wrong house and their warrant had not been approved. @chicagosmayor tried to keep the video from airing. https://t.co/dt7vfr7cxS

The Eagles were ahead and then these big point dumps came in for the Packers. STOP THE STEAL!!!

No Eagles observers are allowed in the stadium so it must be rigged. Eagles are winning. By A LOT!

Game doesn’t end at half time? Stop the steal!!!!! Venezuela made the yellow first down line technology in 2011 and Communists invented the leather for pigskin! Fraud I tel you!

AND someone should check those Gatorade coolers on the sidelines they obviously have extra Packers point stuffed in them.

This may be a conspiracy of buffoons, but it's still a conspiracy. When we aren't howling over Rudy at Four Seasons Total Landscaping (plus, also, its neighboring dildo shop) and the gooey dye weeping out of the tufts of hair on his temples, we have to be clear eyed about the fact that Trump really does want to steal the election, and almost every Republican office holder in the country is happy to let him try. Buffoonish or not, it's a vast and proud seditious conspiracy premised on the notion that Republicans can simply reject election outcomes, because one day they might lose more narrowly than this and the stolen courts will overturn the results for them. They're playing along with it when it's hopeless in part because the next time it might work out.

Trump is serious about trying to undo his defeat, because everything, including perhaps his wealth and liberty, turns on stealing the election—or at the very least leaving the country as broken as possible for Joe Biden. If he must leave power, he must also sabotage the team that beat him (that is, he must harm the population at large) so that the Biden administration lacks the bandwidth to hold him accountable, let alone govern the country.

Republicans are now attacking the transfer of power on two fronts: the shambolic pseudo-legal one playing out in a handful of states, and an administrative one. The former involves an endless stream of lies about fraud, frivolous lawsuits, the public and private pressuring of state-level Republican officials to deem whole categories of ballots deficient, or even just toss all the returns and declare that Trump won. . . .

Against the backdrop of this astounding betrayal, the Democratic leadership has chosen a course of passivity. . . .

If Democrats were like Republicans a large group of party actors would storm agency buildings with cameras and reporters in tow to loudly demand full access to the premises and transition materials, so people don't die unnecessarily of COVID-19. Sheldon Whitehouse would be wearing a gas mask for some reason.

Instead, they have collectively decided to hope public pressure prevails before Republicans do too much damage. Unfathomably, their first resort has been to turn to donors to help them fund a shadow transition.

These are symptoms of the same tendency that drove Democrats to soft-pedal congressional oversight, and fueled this alarming NBC report, sourced to five Biden associates, that says Biden wants to avoid retrospective investigations of Trump, his administration, and his inner circle.

This is all eerily reminiscent of early 2009, when then-President-elect Obama signaled he didn't want federal prosecutors doing retrospective investigations of the Bush torture regime. The connections between that decision and the rise of Donald Trump are real but tenuous. The connections between it and the ascendence of Gina Haspel, torture architect, to the directorship of the CIA, are incredibly direct. . . .

NBC assigned three of its top reporters to the Biden story, so we should assume their five sources know what they're talking about, and that the article reflects Biden's true feelings. If that's right, it's a problem. Biden shouldn't be signaling a preference here either way, particularly at a juncture where Trump basically spends all day screaming "I would rather destroy American democracy than surrender evidence of my crimes." But quite apart from any particular corrupt act Biden might or might not uncover, the party's stoic response is helping Republicans establish an awful precedent.

Democrats have dispatched their best lawyers to slug it out with Trump's goons in court, and those lawyers are performing an admirable service. But legal defense has been the extent of the party's resistance so far, when this isn't principally a legal fight: It's a political fight over the sanctity of the vote, and of important norms governing the transfer of power. Republicans almost certainly can't stop Biden from moving into the White House on January 20, but they can make the early days of his administration hell. If they pull it off without consequence, we can bet that there won't be a smooth transition of power to a Democratic president, free of attempted theft and sabotage, ever again.