More Rudy, Living In His Own Private Idaho 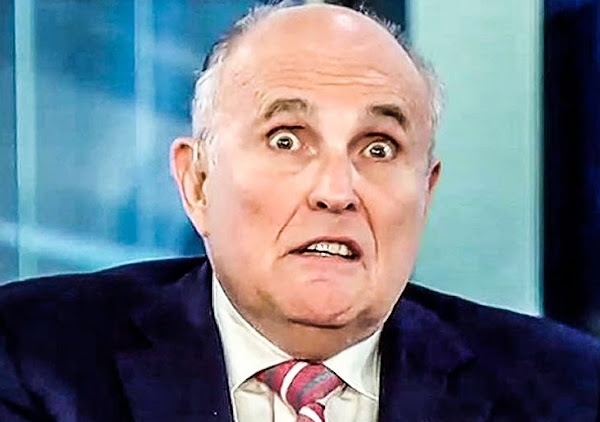 The funny part is that he isn’t actually practicing law, this isn’t a courtroom, or a court proceeding, or anything at all for that matter. It’s just him and a bunch of stooges in a room mimicking an actual courtroom proceeding.

Why did the Trump administration do nothing to protect our election from this massive, widespread voter fraud that they are claiming? If what they are saying is true, wouldn't that mean that Trump is dangerously incompetent and unqualified because he did nothing to address it?

Here’s Giuliani yelling “objection!” during yesterday’s event in Michigan even though he wasn’t in a courtroom pic.twitter.com/oAJbEMCEhQ

Yes, that's exactly what he said, which is freaking hilarious! You can hear the laughter in his voice as he says it. No one is taking Giuliani seriously. There's simply no way they can. They're going through the motions because they have to.

At another point Giuliani, who exposes himself to coronavirus like normal people breathe air, asked a woman sitting next to him to take her mask off pic.twitter.com/MjE2Eel4Gb

Another $20k of superb legal work. What a deal

Rudy Giuliani: We have a real good shot pic.twitter.com/nLSTcbpmg2

If Trump loses the election 5 more times he gets a free sundae.

The mother-of-two had struck a plea deal with Wayne County prosecutors, who in turn dropped a first degree obscenity charge against her, the Daily Mail reports. #MichiganHearing #RudyGiuliani https://t.co/WCWV0MkOS0

“If seatbelts work, why do people still die in car accidents?" pic.twitter.com/ljCFTfToU7

New video into the @wcco newsroom shows the plane landing on 35W last night and colliding with a vehicle! The State Patrol reported no injuries. pic.twitter.com/tkabShah3J