Arizona Republican Party Asks Supporters If They Are Willing To Die For Trump
After 50 Court Losses, Trump Says "The Big One" Is Coming (Though It's Relying On The Same Discredited "Evidence")

On Monday night, around 11 PM, the Arizona Republican Party sent out a tweet asking followers if they were willing to die in Donald Trump's battle to overturn the 2020 election.

About an hour later, AZGOP tweeted a follow-up, posting a clip from the movie Rambo, with the caption: "This is what we do, who we are. Live for nothing, or die for something." 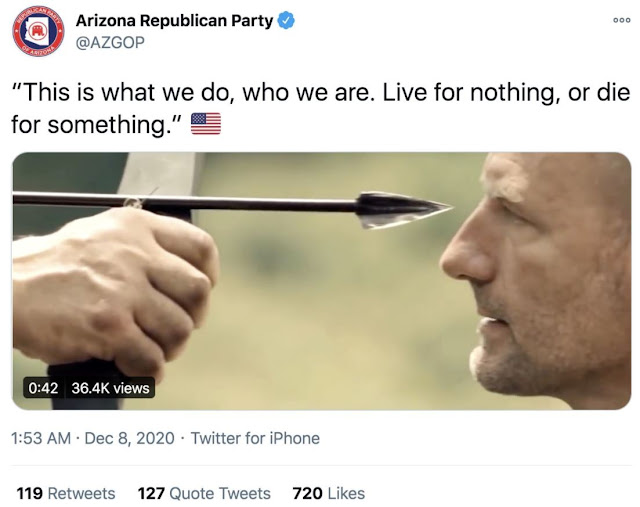 This latest bout of insanity began when a far-right associate of Roger Stone tweeted "I am willing to give my life for this fight". (The AZ GOP has deleted both tweets.)

Both Wood and Trump's illiterate lawyer Sidney Powell (who has trouble spelling the names of states in which she is filing lawsuits) have referred to supporters as "digital soldiers", a popular phrase in the QAnon conspiracy world. (This seems like an insult, since I recall during the W years anonymous far-right cowards who talked tough about the Iraq invasion were derided as "keyboard kommandos".)

On Monday, Lindsey Graham told Fox viewers that there is a "civil war brewing in Georgia" over the (non-existent) question of the election's authenticity. Brian Hughes, associate director of American University’s Polarization and Extremism Research Innovation Lab, says the far-right often frames its political fights as wars between good and evil. "What you're seeing now is this histrionic style being expressed through the cultish dimensions of Trumpism".

1-51
The lone victory came on November 5, when a Pennsylvania appellate judge ruled poll watchers must be allowed within six feet of the people counting the votes. Trump touted it as a "big legal win" (of course he did), but it had less than zero to do with actual votes or the election result. Since November 7, when Biden was declared the winner of the election, Trump has lost every court case.
Trump's "Elite Strike Force" Lawyer Scorecard:

The First 50 Cases (And 50 Losses) Were Just Practice.

Texas and 17 other red states are asking the Supreme Court to block Biden’s win in a case Trump calls “the big one.” The problem is they’ve got nothing beyond flimsy and already discredited arguments. https://t.co/jPk7KmFkpX

The one that hasn't been dismissed yet is always "the big one." And, no, the Supreme Court will not hear this one either.

"Is Trump simply lying in order to extract money from his followers... Or is he crazy enough to believe this stuff? The fact that he would associate himself with this case – which is going nowhere – suggests that he may actually be off his rocker." – @JohnJHarwood pic.twitter.com/37AByBtcir

Just make sure the border is closed tighter than a MAGA-dolt's mind.
Posted by allan at 4:33 PM