Barrett Still Refusing To State Basic Opinions, Fearful Of Either Displeasing
Her Conservative Masters Or Revealing Herself As An Sociopathic Monster
(She Settled For Looking Like An Evasive Moron) 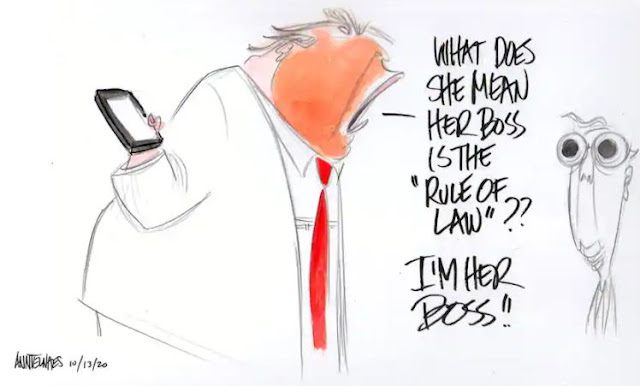 I'm old enough to remember when Republicans were falling over themselves at how impressive it was that she wasn't using any notes.

In retrospect, maybe she should have used at least one note. pic.twitter.com/XkUFLBUnq8

I am Amy's empty notepad. Yesterday she held me up, supposedly to show that she needed no notes -- it was all in that brain of hers.

Today, that brain couldn't come up with what eighth-graders memorize.

Not for nothing am I empty, folks.

She comes to the hearing with no documents, only a blank congressional provided notepad & she can’t remember all the guaranteed freedoms of the 1st Amendment... Looks like she has been told not to worry, no matter what the Republicans will vote her in. A rigged hearing... #RESIST

BOOKER: Do you think it's wrong to separate children from their parents to deter immigrants from coming the the US?

CONEY BARRETT: That's been a matter of policy debate in which I can't express a view pic.twitter.com/vgc3qJV097

wait, why can she not express a personal opinion based upon her deeply held religious beliefs on such an issue?

He didn't ask if it was "legal"

"BOOKER: Do you think it's wrong to separate children from their parents to deter immigrants from coming the the US?"

BARRETT: "Senator Booker, I think you're trying to trick me into expressing the opinion of a decent human being. As you know I can't do that."

Awful answer. But I wish he framed his question in a celver way. For example: Are you aware of any law that would justify seperating children from their parents for a reason other than protecting the children? In this way she couldn't have refrained from answering the question.

Pretty soon she’s going to be unable to express a view as to whether her name is Amy Coney Barrett.

Perhaps the most revealing moment in this whole SCOTUS sham hearing. This isn’t a nominee respectfully interviewing for a lifetime seat on the highest court in the land, this is smug evasive condescension. Oh, and she clearly doesn’t accept the scientific fact of climate change. https://t.co/vDrfPNONR2

"I have read things about climate change. I would not say I have firm views on it.” pic.twitter.com/7LdfTNojs0

"How about racism? Do you have any thoughts on racism?" Uhh... "I have read things about racism. I would not say I have firm views on it." Like racism, climate change is not an opinion: it is real and affects all of us.

I wonder why this hasn’t come up during confirmation hearings. Extremely relevant, as it connects her with big corporate dealings, and fits with trumps plans with this addition to Supreme Court, over an American relief package that should be primary and takes precedence.

who does the laundry in your house? pic.twitter.com/hYqj8iX2n9

"How about pineapple on pizza? Know anything about that?"

"I for one hope that every registered voter in this country votes on November 11" -- Sen. Thom Tillis doesn't know when Election Day is pic.twitter.com/efO2ltUt1c

Barrett Hiding Things She Should Have Disclosed To The Senate

NEW: “Public calendars from the University of Notre Dame's law school show at least seven additional talks not listed on Judge Amy Coney Barrett's Senate paperwork, including one with the law school's anti-abortion group, according to a CNN KFile review.” https://t.co/EOSiwYtLNI

Lindsey Graham to ACB: "You're not aware of any effort to go back to the good old days of segregation by a legislative body, is that correct?" pic.twitter.com/Ioj7GEfoFw

Graham clarifies that his "good old days of segregation" comment was sarcastic pic.twitter.com/E7J0sqQMUJ

Trump was a bit hoarse during a speech he made today to the New York Economic Club pic.twitter.com/OBulGG3WC2

Nobody seems to pay attention to this stuff anymore but this is the president of the United States tweeting that Osama bin Laden was kept alive in Iran and moved to Pakistan for Obama to have a “trophy kill” (which is obviously false) pic.twitter.com/lKuql2nnOv

Trump: the press is the enemy of the people!

NBC: we'll clear our primetime schedule for you!

sums up the Trump era perfectly

Absent any detailed explanation from NBC about why they're doing this, I am going to openly speculate: The refs have been succesfully worked. The execs are hearing and fearing that the "taint" of MSNBC is affecting the NBC News brand. They think this will help correct for that. https://t.co/TfCm3fJFtQ