Trump Has Been A Russian Asset For Decades, Most Likely Since 1987.
That Fact Has Been Confirmed By Both US Intelligence Agencies & A Former KGB Spy. 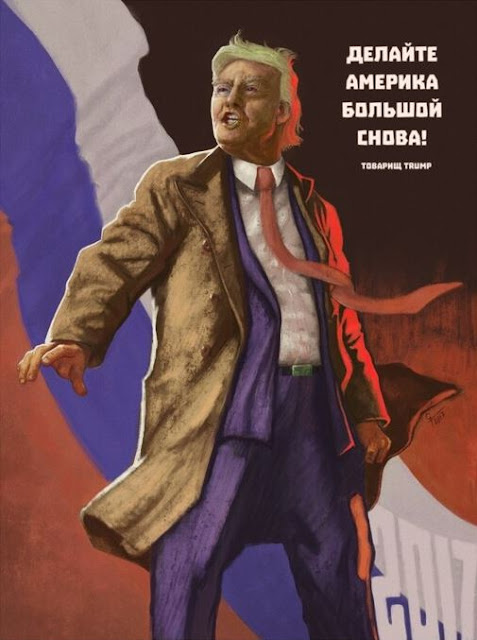 Yuri Shvets, a former KGB spy, revealed to author Craig Unger that former president Donald Trump has been working with Russian intelligence officials for decades. Indeed, Trump's identity as a Russian asset has been confirmed by the US intelligence community and in an investigative report led by members of Trump's own party, a report which was compiled, written, and edited during Trump's administration.
Shvets's interview forms part of Unger's recently-published book American Kompromat: How the KGB Cultivated Donald Trump, and Related Tales of Sex, Greed, Power, and Treachery. It's Unger's second book investigating Trump's numerous ties to Russia, following House of Trump, House of Putin: The Untold Story of Donald Trump and the Russian Mafia (2018), which revealed the names of 59 Russians as long-term business associates of Trump.
(A redacted copy of Robert Mueller's "Report On The Investigation Into Russian Interference In The 2016 Presidential Election", released to the public in April 2019, documented 272 contacts evidencing clearly-identified collusion between Trump's 2016 campaign and Russia-linked operatives.)
So how was the KGB able to lure Trump in and get him (knowingly or otherwise) to do their bidding for three decades? Shvets says it was easy. They flattered him.

In terms of his personality, the guy is not a complicated cookie. His most important characteristics being low intellect coupled with hyperinflated vanity. This makes him a dream for an experienced recruiter.

Donald Trump was a tool in a long-running Russian campaign to weaken the United States. That's been documented in Republican-led investigative reports, and now it has been updated with new evidence, thanks to the U.S. Intelligence Community's assessment of the 2020 election. The report, drafted by the CIA, the FBI, and several other agencies, was released in unclassified form on Tuesday, but it was presented in classified form on Jan. 7. In other words, it was compiled, written, and edited during Trump's administration. It destroys his lies about the election, and it exposes him as a Russian asset.

Shvets said the KGB cultivated Trump as an American leader (now we know exactly whom to blame) and persuaded him to run full-page advertisements in major American newspapers pushing KGB talking points in the late 1980s. The Soviet Union's Active Measures Directorate said having "three major American newspapers publish KGB soundbites" was "one of the most successful KGB operations" in history.
Russia worked behind the scenes in both 2016 and 2020 to get Trump into the White House. Indeed, Russia, Trump, and the entire GQP have long had the same goals.

“The most startling conclusion that emerges from the intelligence reports is that Republicans close to Trump continued to peddle Moscow’s line even after they were warned about the Russian disinformation campaign.” https://t.co/APCOy5cAZw

Russia worked to boost Trump in 2020—with help from Giuliani, Fox News, and OANN https://t.co/AKNCB5UHQ5

Michael Caputo was a Trump loyalist since the ’80s. He was hired by Russia Gazprom Media in the ’90s to work for Putin as a PR consultant. He was also a longtime associate of Roger Stone. Then just like that he was hired as a ’spokesperson’ for HHS, to promote herd immunity.

The high-level connections between Trump and Putin are many: 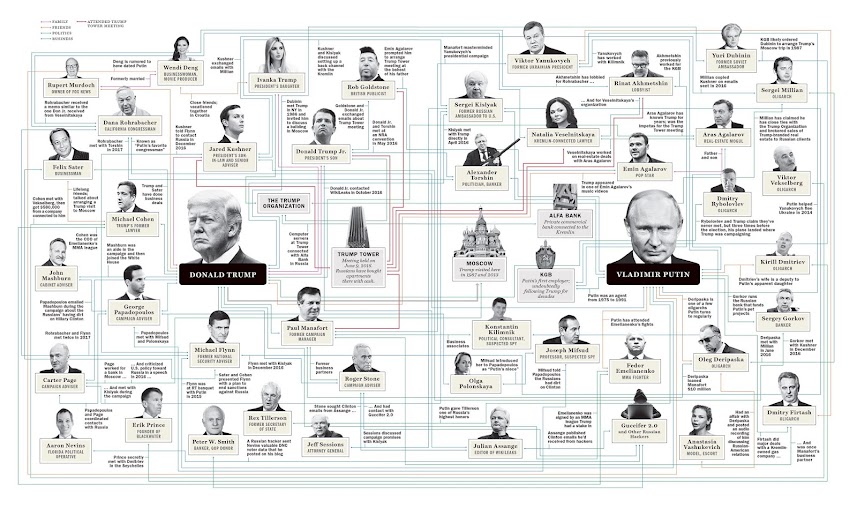 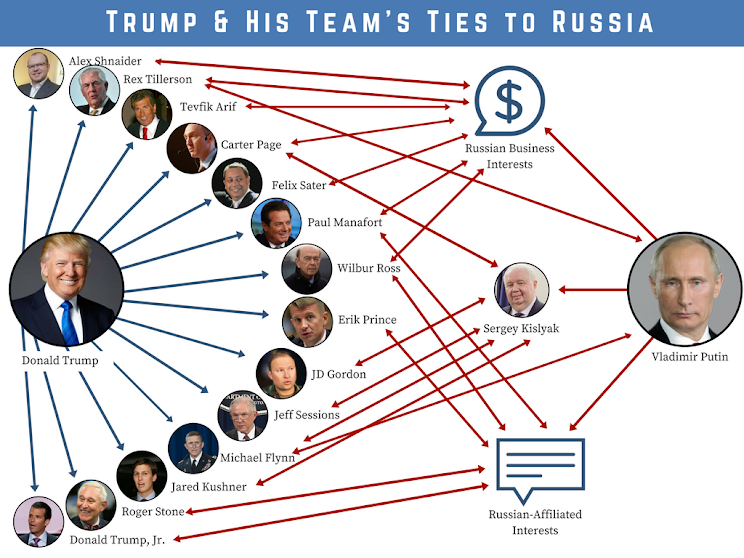 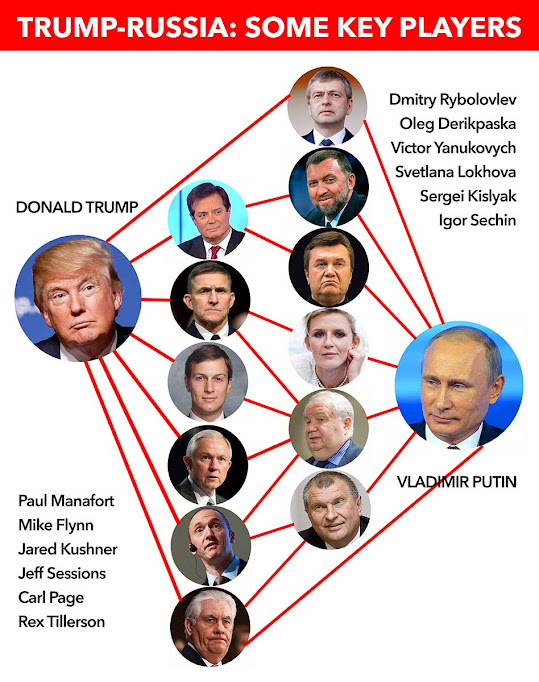 Documents obtained by The Daily Beast link the $230 million fraud discussed at the Trump Tower meeting in 2016 to Russia’s black-market weapons of mass destruction program https://t.co/fGUxXFVMNd

New York Magazine writer Jonathan Chait, who speculated several years ago that Trump may have become a Russian asset as far back as 1987, now believes that even if it could be proven beyond all doubt that Trump has been a Russian tool for the past 34+ years, the fallout would not have been very substantial:

There is an allure to the mysterious that gives certain unknown facts outsize meaning. Uncovering the secret identity of "Deep Throat" was considered one of journalism's greatest prizes, until Associate FBI Director Mark Felt admitted it was him, after which hardly anybody cared. If Jimmy Hoffa's body had turned up shortly after his disappearance, its location would have been forgotten almost immediately, rather than becoming the subject of decades-long speculation and probing.
The nature and origins of Donald Trump's relationship with Russia probably falls into this category. The full story will probably never be known for certain. Robert Mueller was thought to be pursuing it, but steered clear of the counterintelligence investigation to focus more narrowly on criminal violations; the Senate Intelligence Committee produced tantalizing evidence of 2016 campaign collusion, but did not have access to Trump's inner circle. In theory, the Trump lieutenants who clammed up, Paul Manafort and Roger Stone, or their Russian contacts, like Manafort partner Konstantin Kilimnik, could eventually furnish some kind of deathbed confession, but even that would be rendered inconclusive by its source's fundamental lack of credibility.
If something like the most sinister plausible story turned out to be true, how much would it matter? Probably not that much. Don't get me wrong: Russia having secret channels of leverage over an American president isn't good. I have merely come to think that even if we could have confirmed the worst, to the point that even Trump's supporters could no longer deny it, it wouldn't have changed very much. Trump wouldn't have been forced to resign, and his Republican supporters would not have had to repudiate him. The controversy would have simply receded into the vast landscape of partisan talking points — one more thing liberals mock Trump over, and conservatives complain about the media for covering instead of Nancy Pelosi's freezer or antifa or the latest campus outrage.
One reason I think that is because a great deal of incriminating information was confirmed and very little in fact changed as a result. In 2018, Buzzfeed reported, and the next year Robert Mueller confirmed, explosive details of a Russian kompromat operation. During the campaign, Russia had been dangling a Moscow building deal that stood to give hundreds of millions of dollars in profit to Trump, at no risk. Not only did he stand to gain this windfall, but he was lying in public at the time about his dealings with Russia, which gave Vladimir Putin additional leverage over him. (Russia could expose Trump's lies at any time if he did something to displease Moscow.)
Mueller even testified that this arrangement gave Russia blackmail leverage over Trump. But by the time these facts had passed from the realm of the mysterious to the confirmed, they had become uninteresting.

Which is mind-boggling to me, as it likely is for a lot of people who are old enough to remember when the mainstream perception of the Soviet Union was as the #1 enemy of the United States. No other country was even close. It is surreal to watch the hordes of American right-wing yahoos pledge their lives (literally, during the pandemic) to a guy who is a Russian puppet, and who could not hide that fact particularly well at times, publicly taking Putin's side over his own intelligence agencies on several occasions and never mentioning to Putin (over nearly two years) the Russian leader paying cash bounties to terrorists for specifically killing US soldiers (who Trump also trashed as "suckers" and "losers", so perhaps his complete disregard for their lives is not all that surprising).
The majority of American people cannot be angry at this treasonous state of affairs unless the mainstream media instructs them to be angry. And, sadly, the media has not bothered to make much fuss over this. What should be a major earthquake barely registers on the media's newscape. Of course, American presidents supporting America's alleged enemies is nothing new (and neither is the media's refusal to report that news).

Trump is doing an interview to distract from the ODNI intelligence report. In so doing, he is further amplifying the disinformation narratives outlined in the report, on an outlet Russia relies on to spread its propaganda, as per the report. Just saying.

The American right wing's long term flirtation with Putin is a pretty clear tell about its lurch to ethno-nationalism and authoritarianism. https://t.co/tbMUhmGFM2

They're rooting for Putin pic.twitter.com/WcNjxcFkLR

Fox News has been parroting Russian propaganda for the better part of 2 days now pic.twitter.com/vMsgPUdK6D

Hard to tell the difference between the "ever so patriotic" Fox "News" and Russian state TV nowadays. 🙄 pic.twitter.com/wpdiogWIli

Remember when Republicans would say, "Move to Russia if you don't like our government...” 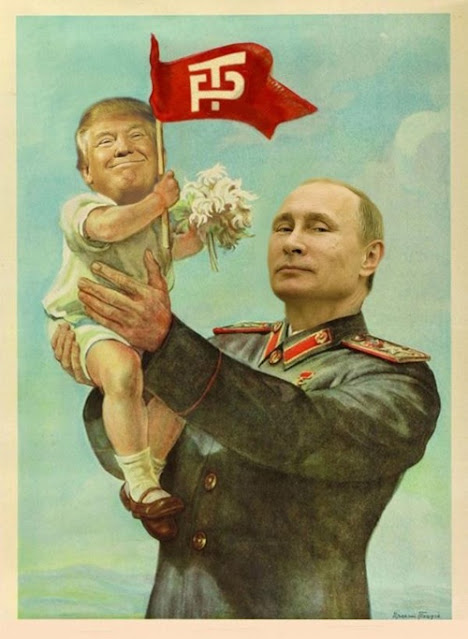 I hope you're using a wall with photos and string.