An Intelligent Discussion About Racist Images Would Be Illuminating And Educational, But You Won't Find That On Fox, As Seussgate Enters Its Second Day

When you’re so bad at news you actually only report it on accident.

You would expect Fox to loudly insist a private business has the absolute right to do whatever it goddamn wants and the government or the media or private citizens should never be allowed to dictate what a company can do. But in this case, the network is saying just the opposite, and deliberately refusing to report that Dr. Seuss Enterprises is the entity ceasing publications of its own books.
It's not a unique situation. Stephen King told his publisher to stop printing Rage, a 1977 novel about an armed high school student who holds his class hostage, which he wrote under the name Richard Bachman. After the book was cited by several school shooters, King told his publisher to let it go out of print.
Bill Chappell, NPR. March 2, 2021:

Dr. Seuss Enterprises will cease publishing six of the author's books — including And to Think That I Saw It on Mulberry Street and If I Ran the Zoo — saying they "portray people in ways that are hurtful and wrong." The books have been criticized for how they depict Asian and Black people.
The decision to stop publishing and licensing the books follows a review by a panel of educators and other experts, according to Dr. Seuss Enterprises, the company that controls the author's books and characters. The other four titles that will be permanently shelved are McElligot's Pool, On Beyond Zebra!, Scrambled Eggs Super! and The Cat's Quizzer.
The company says the decision was made last year, in an effort to support "all children and families with messages of hope, inspiration, inclusion, and friendship."
First published in 1937, And to Think That I Saw It on Mulberry Street is the book that propelled Theodor Seuss Geisel's career to new heights . . . [O]ver the years, critics and readers have struggled to reconcile the open-hearted and clever tone of it and other Seuss classics with the small-minded caricatures of minorities they also contain.
As NPR's Code Switch team has reported:

"In And to Think That I Saw It on Mulberry Street, for example, a character described as Chinese has two lines for eyes, carries chopsticks and a bowl of rice, and wears traditional Japanese-style shoes. In If I Ran the Zoo, two men said to be from Africa are shown shirtless, shoeless and wearing grass skirts as they carry an exotic animal. Outside of his books, the author's personal legacy has come into question, too — Seuss wrote an entire minstrel show in high school and performed as the main character in full blackface." . . .

"Ceasing sales of these books is only part of our commitment and our broader plan to ensure Dr. Seuss Enterprises's catalog represents and supports all communities and families," the company says.

Dr. Seuss Enterprises did not specify which illustrations were offensive, but four of the titles contain cartoon depictions of Asian people, while three contain stereotypical portrayals of Inuit.
If I Ran the Zoo features a young boy imagining a hunting expedition to the fictional land of Zomba-ma-tant where locals "wear their eyes at a slant." Other pages also show the "African island of Yerka," featuring squat African tribesmen with large hoops through their noses.
And To Think That I Saw It On Mulberry Street has its young protagonist imagining an increasingly fanciful street parade that  includes "a Chinaman who eats with sticks," a "Rajah, with rubies" and two fur-clad figures being pulled by a reindeer. . . .
McElligot's Pool follows a boy imagining the far-out things he'll catch while fishing in a stagnant pond, including "Eskimo Fish from beyond Hudson Bay."
Scrambled Eggs Super! has its young protagonist boasting about the increasingly rare eggs he would source for breakfast, including that of the Mt. Strookoo Cuckoo, for which he would enlist the help of a beturbaned helper named Ali. The people of the fictional Arctic nation of Fa-Zoal are also shown clad in furs and paddling skin boats in order to harvest eggs from a "Grice."
The Cat’s Quizzer, the most recent (and least popular) of the six books appears to have gotten pulled because of a page 11 illustration of a yellow figure in a coolie hat with the caption, "how old do you have to be to be a Japanese?"
Of the six, the problematic imagery in On Beyond Zebra! is probably the least obvious. The book catalogues a whimsical set of new letters in the alphabet, and briefly features the "Nazzim of Bazzim," a figure of unspecified nationality riding a camel-like creature called a "Spazzim." . . .
Of Geisel’s decades-long portfolio, it's his advertising work and editorial cartoons — drawn in the 1930s and 1940s — that contain the heaviest use of derogatory racial caricatures. One of the more notorious is a series of ads for the insecticide company Flit that features big-lipped Africans riding elephants and living in grass huts.
After the Pearl Harbor attack in 1941, Geisel published a number of cartoons depicting Japanese people with stereotypically prominent front teeth. One 1942 cartoon even endorses Japanese-American internment by showing Japanese-Americans as disloyal citizens stockpiling explosives and "waiting for the signal from home."
Despite this, Geisel could simultaneously take stances against racism and prejudice, even when those concepts were against the mainstream. While an editorial cartoonist for the liberal New York paper PM, Geisel was an early advocate for strong U.S. action against Nazi Germany, and in one cartoon said Americans needed a "good mental insecticide" to clear their minds of "racial prejudice."

Hopper's article also contains images from the books, which have not been included in most news articles. 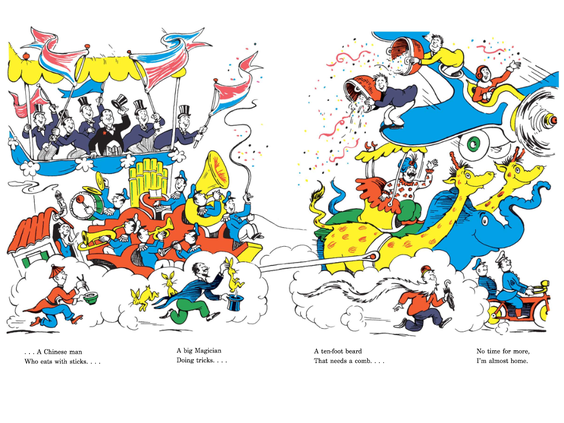 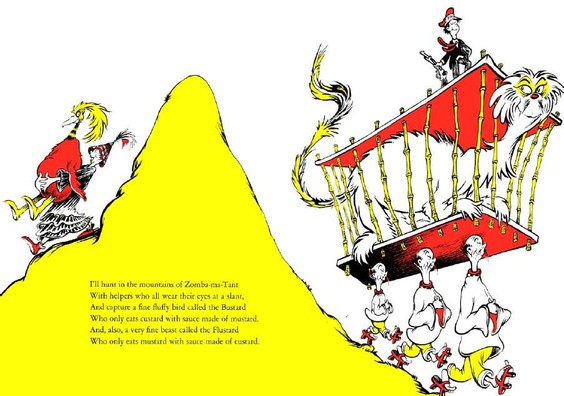 There is an opportunity here for a debate over racist illustrations, putting them in context of their time without excusing them, shining a light on why they were mainstream and acceptable at one time, and talking about the various actions that could be taken (stop printing them, print them with an explanation, etc.)
There could also be discussions about how human beings are complex and contradictory, far from binary black-and-white creatures. Theodore Geisel was an artist who drew racist images, but also worked to fight racism and fascism and later came to regret his earlier, offensive work.
But propaganda networks like Fox do not deal in shades of gray and nuance. They see the world as black and white, right and wrong, love it or leave it. You will not find any mind-cleansing "mental insecticide" on Fox. The network is more akin to a malaria-infected mosquito.

i just woke up and my god, they're still at it pic.twitter.com/JDLTB5vZbw

The power of distraction. Have they even reported that the FBI hasn't found a single imposter among the Capital Insurrectionists?

I can't wait to see them cover this. https://t.co/esqEpObHlI pic.twitter.com/gmB5W8Ia0y

Fox & Friends is about to devote its second segment of the day to Dr. Seuss pic.twitter.com/9dNXBqSZ4B

"Buy Mr. and Mrs. Potato Head because it's the end of an era. It is the end of freedom in America" pic.twitter.com/VokzfOj8b6

I thought the free market capitalists would defend the right of a company to sell whatever products it wants. Does he want more central planning in the toy industry or something?

*outside a Walmart near you*

"wE'rE hErE tO bUy uP aLL tHe mR. pOtAtO hEaDs bEfOrE hE gEtS cAnCeLeD!! LeT uS iN noOOoOoWWW!!!" pic.twitter.com/oa56W74cHE

I'll give you my Green Eggs And Ham when you pry it from my cold, dead hands

I doubt they've even mentioned it's the estate that decided it - a far as they're concerned it's Joe Biden.

We’re going to need a National Dr. Seuss Investigative Commission to iron this all out https://t.co/yBnQmnhT10

Fox News is about to do another Dr. Seuss segment pic.twitter.com/X8IxbVsbOJ

you've got to be kidding me pic.twitter.com/T4pd6sYwqy

Today, the House is passing the most comprehensive election & ethics reform package ever introduced in Congress—wonder why @FoxNews is avoiding the topic? https://t.co/NzMAyp4OUk

Fox News, which today was too busy covering Dr. Seuss news to live-televise Wray's debunkings, has been a big part of the spread of this lie. But the problem is way bigger than Fox:https://t.co/I7sDe7HpSt pic.twitter.com/iAB6qa1G5e

Wrote about the pervasiveness of Republican belief in the Antifa-Capitol lie, the long list of prominent people who spread it, how this is part of a pattern, and why the problem is not just the Fox-and-co. lie supply but demand for these kinds of lies: https://t.co/I7sDe7HpSt

By this logic let's repeal seat belt laws and drunk driving laws and, while we're at it, all traffic laws--because, hey, individuals should assess their own risk tolerance. https://t.co/fixeIFcA9N

Stephen Miller is on Fox claiming that undocumented immigrants are posing as teens to gain access to high schools and endanger American children. pic.twitter.com/bxIEsPhsw0

She isn’t really back until she starts waving paper... https://t.co/1ccRKEFyFP