Weak, Sniveling, Spineless Republicans Are Blaming Things That Don't Even Exist For The Problems They Knowingly Created (Ted Cruz Is A Schumck Who Everyone Hates) 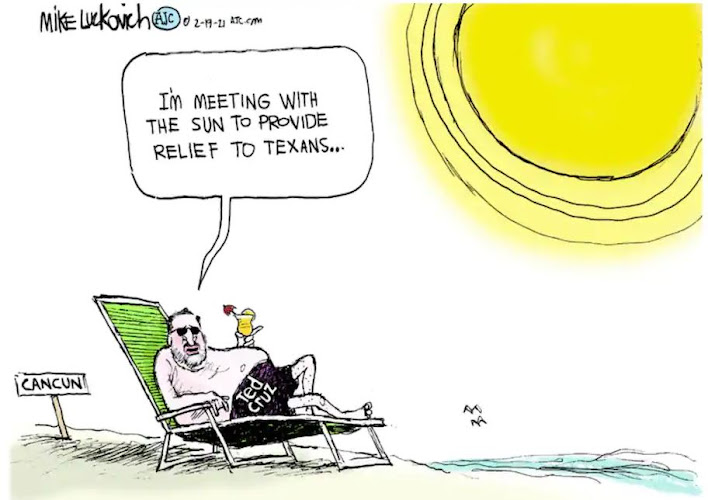 Republicans are blaming the Green New Deal and wind turbines for causing the severe power and water supply crisis in Texas (and several other states) that has left at least 80 people dead. And their bootlickers in the mainstream media are happy to spread these preposterous lies.

There are a few problems with those laughable excuses.

1. The Green New Deal does not exist.

2. Even if the Green New Deal did exist, Texas would not be affected because its power grid is isolated from federal regulations, having been deregulated and privatized. Blaming unicorns in New Zealand would make as much sense (or perhaps more sense since New Zealand actually exists).

3. Turbines work fine in much colder places such as the Arctic (or even throughout states north of Texas like Oklahoma or Iowa) because they are winterized. Ten years ago, Texas was told to winterize its turbines. Republicans ignored those warnings, because they did not want to spend (i.e., waste) the money.

4. The true cause of the power-grid failure has been natural-gas shortages and malfunctioning instruments at power plants. When state services are privatized, corporations will always cut costs to increase profits without caring about the fallout to customers because they operate a monopoly which is protected by the government (in Texas's case, protected by Republicans).

5. Renewable energy accounts for about 10% of Texas's power in the winter. Even if every turbine in the state suddenly stopped working, there should still be plenty of power production.

6. Republicans run Texas's power grid, so if turbines are the problem (which they are not), then Republicans are at fault for installing them. But if morons are going to believe someone thousands of miles away who had nothing to do with the situation is at fault, why not blame her? (Some of the same people forced to burn their own furniture for warmth are probably cursing AOC.)

“Did @AOC, 10 years ago at the tender age of 21, parachute into the state of Texas to put up windmills under cover of night?” says @chrislhayes of the GOP blaming power outages on “green energy,” despite Republicans holding "nearly every statewide office in Texas for decades." pic.twitter.com/VXfu1soOb0

Republicans are unable to take responsibility for anything. It's fuckin' unbelievable. Nothing could possibly be their fault and they whine and pout and throw a tantrum like a two-year-old who has missed his nap every single time they get asked why they fucked up. How can so many people not only tolerate these weak, immature, cowardly, sniveling, spineless frauds, but proudly support them?

Ted Cruz is such a schmuck.

Ted Cruz made fun of Alexandria Ocasio-Cortez for saying she feared for her life because of death threats from Cruz's fans during Trump's MAGA insurrection. Yet while Lyin' Ted was gathering his family (forming a caravan?) and crossing the border hoping for better living conditions, AOC was busy raising several millions of dollars to help people who voted for Cruz because they were suffering Americans unfortunate enough to live in the red state Cruz had immediately abandoned.

From Cruz's Lengthy History of Hypocrisy

August 2014
Cruz criticized then-President Obama for spending too much time golfing while there was a border crisis in Texas. "I think the President should actually stand up and do his job as commander-in-chief, should spend less time on the golf course and more time doing the job to which he was elected," Cruz told reporters. A month earlier, Cruz called Obama an "absentee president" who was "not focused on the people who are hurting" during a humanitarian crisis.
April 2015
Cruz said "if the only terrorists attacked a golf course, that might actually get the White House's attention. Holy cow, this is serious!"
September 2017
Cruz said then-New Jersey Gov. Chris Christie "should go back to the beach," referencing the outrage surrounding Christie's beach trip with his family while the state's government was shut down. (Cruz was also responding to Christie's charges of hypocrisy because Cruz requested federal aid for Texas following Hurricane Harvey while opposing aid for the northeast after Hurricane Sandy.)

California is now unable to perform even basic functions of civilization, like having reliable electricity.

Hey Sen. Cruz, Texas could use some civilization about now. People are freezing to death. @tedcruz https://t.co/c6A1NvtOJQ

December 2020
This was so recent, most Americans might even remember it. Cruz attacked Austin Mayor Steve Adler for going to Mexico during the coronavirus pandemic.

And don't forget @MayorAdler who took a private jet with eight people to Cabo and WHILE IN CABO recorded a video telling Austinites to "stay home if you can...this is not the time to relax." pic.twitter.com/KSvkiwxgga

No one self owns quite the way you do, Flyin’ Ted.
You’re so adept at this, you’d think you’re last name was Trump. pic.twitter.com/qkIpas2njS

When your dad blames you for his decision to abandon his state during a crisis pic.twitter.com/fxTnTNd5SP

If you want to print... pic.twitter.com/GVsbxHc0qH

Why does everyone take an instant dislike to Ted Cruz?
It saves time.
Everyone Hates Ted.
Posted by allan at 5:50 PM