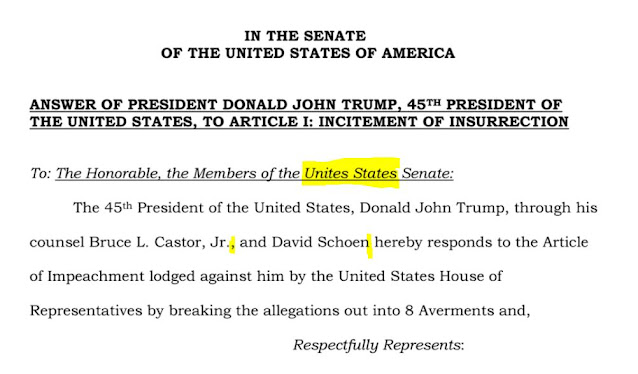 This is the very beginning of the 14-page document filed by Donald Trump's counsel in his upcoming impeachment trial. (By the way, and by contrast, the prosecution's filing was 80 pages.)
Yes. Trump's lawyers cannot spell "United States". (There is also a misplaced comma, a spot that needed a comma, a redundant "President" in the document's title, and what's the deal with "the Honorable"? The Honorable what?)
Not understanding the mysteries of how letters fit together to create words that convey meaning is a Trump legal tradition. Numerous court filings by Dolt45's "Elite Strike Force" were filled with a shocking amount of misspellings of common legal words like "District" ("Districct", "Distrcoict"), formatting irregularities (running as many as 17 words together with no spaces), and other errors (referring to their own expert Briggs as "Higgs", mentioning a Detroit vote counting location in a Wisconsin filing, and calling a poll watcher a "pole watcher" and a second amended complaint as a "second amendment complaint").
* * *
Anywhere from one-third to one-half of the Republicans in the House of Representatives gave Marjorie Taylor Greene (Q-Georgia) a standing ovation on Wednesday. The entire House will vote on Thursday whether to remove Greene from her House Budget and Education committee assignments.
How will Republicans vote? They could follow Mitch McConnell, who described "loony lies and conspiracy theories" as a "cancer" for the party. McConnell should not be praised for saying these words. First, he did not actually mention Greene. Second, McConnell kept silent for more than five years as Donald Trump brought an entire songbook of loony tunes into the party. McConnell's comments are the opposite of what he presumably believes, but the Seditionists could go in that direction and vote against Greene.
Or they could fall in line behind Greene (as their silence for weeks has already done), who fired back at McConnell, tweeting that "the real cancer for the Republican Party is weak Republicans who only know how to lose gracefully". They could affirm that they are the QAnon party, who believe school shootings are faked, masks and public health measures are the modern chains of slavery, Democrats skin babies alive and drink their blood, Jews are starting forest fires with space lasers, Nancy Pelosi should get a bullet in the head, and other "treasonous" Democrats should be hanged.
Greene recently met with Donald Trump, who has praised her. Recent events have shown that everyone in the GOP (GQP?) is terrified of crossing her. In many ways, Greene, who took office only one one month ago, has become the de facto leader of the party. While a few conservatives have said they disapprove of Greene's comments, we should ignore their statements and look at their actions.

This is the modern Republican Party. pic.twitter.com/1dgC2SuFsk

In case you didn’t read Kevin McCarthy’s statement let me summarize it. I’ve changed some names

MCCARTHY: I met with Jeffrey Dahmer & condemned his practice of eating people. I told him he can’t eat people anymore. He understood.

But now the Dems are upset & making it an issue. https://t.co/zBqPfPuxxR

House Republicans give standing ovation to member who endorsed the murder of the House Speaker https://t.co/ZnXjYClacM

To be clear, Republicans are mad at Cheney because she thought it was wrong for the president to try to overthrow democracy. https://t.co/57Gf5xLiNZ

Again, Kevin McCarthy wants to take Eric Swalwell off HPSCI and Homeland Security because he COOPERATED with the FBI on a CI case.

Because in the GOP cooperating with the FBI is disqualifying. https://t.co/52sOd6eNRf

Jim Jordan characterizes cancel culture as "as most dangerous thing happening in our country today." (The coronavirus could not be reached for comment.) pic.twitter.com/Y7kKDTY1bs

One wants people to have health care. The other endorses executions of Democratic leaders. Both sides. https://t.co/GvX9vsRFzk

This is THE BEST. Lindsey Graham suggests that there might missing context that would make Marjorie Taylor Greene's comment about a Jewish space laser much more reasonable. LOLOL https://t.co/pMOwHw0g4E

What does it mean to “take issue” with your own comments? https://t.co/gPLHAm1mY3