Mike Lindell (MyPillow) Pays OAN To Broadcast His Two-Hour Election Fraud Video For 12 Consecutive Hours; Dominion Lawyer: OAN Acted With "Textbook Actual Malice" (Despite Lengthy Disclaimer Stating It's All Bullshit); It Seems Lindell (MyEmptyWallet) Has Produced And Distributed Exhibit A In Any Successful Defamation Suit Against Him 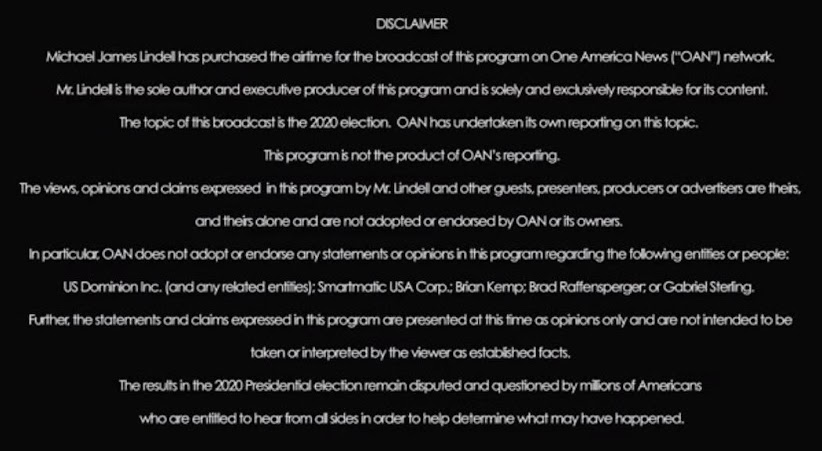 "The statements and claims expressed in this program are . . . not intended to be taken or interpreted by the viewer as established facts."
Please keep in mind that OAN's decision to broadcast "Absolute Proof: Exposing Election Fraud And The Theft Of America By Enemies Foreign And Domestic" multiple times on Friday and this weekend came after the network was named in Dominion's $2.7 billion defamation lawsuit!!!
Thomas Clare, one of Dominion's lawyers:

"Nice try" by OAN, but it definitely does not relieve them of liability. To the contrary, we warned them specifically and in writing that they would be broadcasting false and defamatory statements of fact if they broadcast the program, and they made the affirmative decision to disregarded that warning and broadcast it anyway. . . . Other outlets have refused to host it. Textbook actual malice.

TV's latest, most outrageously paranoid conspiracy-thriller has arrived. It has everything: cyberespionage, evil vote-stealing machines, wicked media cabals. And it aired Friday on One America News Network.

It is "Absolute Proof," a two-hour-plus disinfomercial made and hosted by Mike Lindell, the chief executive of the MyPillow company . . . Mr. Lindell paid OANN to air it multiple times starting Friday.

In it, Mr. Lindell sits behind a news desk stamped with the seal of "WVW Broadcast Network." . . . He claims that Mr. Trump not only won the election but won by such a margin that he "broke the algorithm" of voting machines.

Mr. Lindell used to sell pillows on TV. Now he's peddling dreams. . . . The content of Mr. Lindell's stolen-election case poses a challenge for a newspaper reviewer, because it is hogwash, widely discredited hogwash . . .

It's tempting just to laugh at all this. And make no mistake, you should laugh at all this! It is a healthy sign that after years of alternative facts, you have still retained some sense of reality and the absurd.

But you should also cry, a little. Because it's not hard to imagine an audience who wants to believe . . .

In fact, you don't need to imagine them. Just look at pictures from the Capitol on Jan. 6. . . . [R]idiculous does not mean harmless.

MyPillow magnate Mike Lindell is releasing a 3-hour movie Friday he claims will prove the election was stolen. If his movie fails to catch on, Lindell predicts it will mean the end times out of the Book of Revelation — "We pray and we go to heaven, it's over."

WATCH: Mike Lindell Says The 'End Of Time' Will Come If His 'Miracle' 2-Hour Documentary Doesn't Catch On https://t.co/e9gTZKqLUs

MyPillow CEO Mike Lindell has been hiding out for nearly a month, working 21-hour days on his election fraud opus while guarded by a retinue of former Navy SEALs. A review of the pillow auteur's new production: https://t.co/ysPZf99bRq

good sign for your "news network" when you run a one minute and twenty second disclaimer before a "docu-movie" pic.twitter.com/aj40WwJvZu

OANN: The statements expressed in Mike Lindell’s program are opinions

I wrote about the pillow fight: Fox, Newsmax, and OAN are dueling for Mike Lindell's attention (and cash), and risking legal jeopardy along the way. https://t.co/hfyPZGk8i4

Wonder how dominion is feeling about this assistance to their lawsuit pic.twitter.com/2i2z1WpOAP

Dominion has already filed a $1.3 billion defamation lawsuit against Trump lawyer Rudy Giuliani for baselessly linking the company with fraud, and letters the companies sent to Fox News, Newsmax, and OAN warn that similar litigation is "imminent."

Strangely, however, OAN — an upstart far-right cable network that along with Newsmax has cut into Fox News's audience by echoing Trump's big lies about the election — used extremely reckless language while promoting Lindell's special on Twitter, writing falsely that "Growing evidence of election fraud reveals that the presidency of the United States has been stolen from the American people" in a tweet that has been flagged.

Growing evidence of election fraud reveals that the presidency of the United States has been stolen from the American people.
Join MyPillow CEO Mike Lindell for an exclusive report. Tune in to "Absolute Proof" this Saturday & Sunday starting at 8 AM ET / 5 AM PT. Only on #OANN. pic.twitter.com/1NWMIGUzFd

Massive lawsuits of the sort that Dominion and Smartmatic are threatening have driven media companies out of business in the recent past and could represent an existential threat for OAN, even if Lindell is now compensating them for airtime.

So far the MyPillow election fraud movie is just Mike Lindell narrating a PDF about how we should probably have a civil war. pic.twitter.com/ABarzx14rU

Pay-per-view for Lindell's testimony under direct by Dominion's attorneys is going to be through the roof.

The algorithms that determine how much he is being sued for are about to change at 11:15 tonight.

It's like a fucking Look Around You episode but not funny pic.twitter.com/1vPBxKNhmP

Hol'up this is in the PDF

They state this like this is a known fact... uhh... that was a DC, this don't make no sense...purplemonkeydishwasher....need....air....send...help pic.twitter.com/RikNegSyQn

An algorithm is the system of rules for calculating data. So, is he saying that the election broke math? I know finding a unified theory has been difficult on a quantum level, but simple addition? Computers can calculate pi to 3.1 trillion digits. But 1+1+1+1+...was too much?

Mike Lindell was nice enough to leave comments turned on on his upload of his crazy pants "Absolute Proof" video https://t.co/75RDbMhlRC(dot)com/watch?v=VKaSX9SKR1A pic.twitter.com/zYRcfIDIMZ

just some of the conspiracy theories that have been credibly mentioned in the pillow man's "docufilm" so far:

these 33 seconds should give you a feel of the pillow man's election fraud "docu-film." no, i did not add the music pic.twitter.com/zLlA2M28SW

you can find that amazing image here https://t.co/AdC4Seamx4

Now he is bringing on Russell Ramsland, who also has a "cyber security company" I'll let the website speak for itself

"This tier creates a cyber “cloak of invisibility” for untraceable and untrackable searches and stealth" pic.twitter.com/AisIjBBzzA

Now he has on Dr. Shiva Ayyadurai who falsely claims to have created Emails https://t.co/Xlm3DpJQut @samfbiddle pic.twitter.com/5RD1SIQ7Wm

49 minutes into Mike Lindell's "doc" Absolute Proof and this guest is the first one to make me scream out loud. On the left is Shiva Ayyadurai. Amongst other things, he has claimed he invented email at the age of 14. Will definitely be doing an episode of @gadflypod on him soon. pic.twitter.com/xuRIdGATxw

Don't worry tho, I downloaded it we ain't done yet pic.twitter.com/dQbE2cFKHU

He has two alternative streams up on his personal website and this at the bottom pic.twitter.com/X3sutnZzhq

lol lindell didn't even identify this guy, who said in an unrelated comment that he's a former michigan state senator pic.twitter.com/4ddLSD6SG2

legitimately surprised it took 40 minutes for venezuela to come up pic.twitter.com/R8b2oZ88UC

lol dominion voting systems is going to ruin the mypillow guy. just annihilate everything to his name. ive never seen a man shoot himself in the foot for three hours before

"This Is Gonna Reveal All The Criminals In the Country ... From Social Media, Like Mark Zuckerbuck"

"this is gonna reveal all the evil in our country, all the criminals in the country, all the ones that tried to suppress this. and that's just from social media like jack dorsey, like mark zuckerbuck" pic.twitter.com/v84Dq9xIBj

this is a screenshot of what is on screen pic.twitter.com/zByWW0QeLy

"What does an Ethernet Cable get you? to the internet"

Hey Verizon I have an ethernet cable does that mean I can stop paying you? pic.twitter.com/FWi2bWCSLD

Seriously this acting performance, is Tom Cruise in a suit like Tropic Thunder again? pic.twitter.com/6CjATxFGUF

"The Biggest Crime Against Humanity"

He brought on "Mary Fanning" to show proof of a hack pic.twitter.com/edVplQpeg5

"The Founding Fathers Did Not Know Anything About Cyber Warfare" (Fact!)

*drools outside of mouth* pic.twitter.com/BKYCGY3vfF

(Patriotic music in background)
"Progressisvinsim(sic) is the front door to communism" pic.twitter.com/17CSwrPrRl

Terry Turchie, former FBI agent who retired in 2001, is now on

Also something happened shortly after his retirement that makes me questions how good he was at Counterterrorism... pic.twitter.com/lwtXoVhgPt

They used a few seconds clip.

The whole 1:30 hour video has random cuts through out it like this one pic.twitter.com/YUyCLIyW3w

Other notes
BBM and Google+ were both shuttered year ago
The President of Malta isn't "I.C. Wiener", not sure who you spoke to pic.twitter.com/801ab0xH8A

it has credits, wonder if there is a preview of the next film in the MyPillow Cinematic Craziverse pic.twitter.com/rqMZwT8cAL

"I Love It When A Defamation Lawsuit Comes Together"

There is music, sounds vaguely like the A-Team Theme Song pic.twitter.com/8Hk1STjzBo

No hidden credit scene at all

I demand that the employees of whichever Minneapolis production company was contracted to shoot and edit this also produce an oral history/ behind the scenes of this production.

I'd even take a mockumentary as I am sure I would never know the difference.

I wonder if there is any foam in his pillows ?