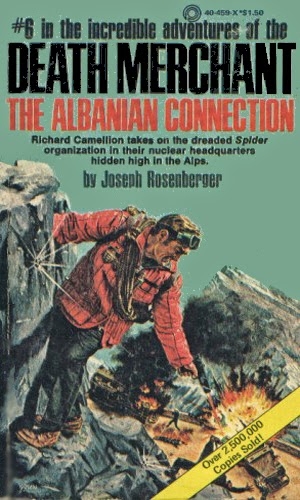 In the sixth number of Death Merchant, Joseph Rosenberger has his hero, Richard Camellion, in West Germany at the request of the CIA. The Spider, a world-wide organization of ex-Nazis who escaped Germany toward the end of WWII, have been plotting for 28 years (the book was published in 1973) to gain control of, and reunify, Germany and again seek domination of Europe.

The Spider has been paying millions to the tiny nation of Albania to have its headquarters in a huge cavern in the Alps. But the Albanians - and the rest of the world - are unaware of the true activity going on at Spider HQ: the Nazis are assembling seven atomic bombs, four of which are meant for London, Paris, New York, and Los Angeles, if they do not get their way.

"A fantastic scheme? Camellion readily agreed that it was. But then, the followers of Adolf Hitler had never been noted for having common sense, or any other human quality. The plan was just crazy enough to work."

Yes, Rosenberger actually wrote that last sentence. (Perhaps it wasn't such a cliche 41 years ago.)

The Nazis plan to smuggle in the last of the necessary plutonium - and Camellion's first task is to find and thwart that shipment. Camellion is a master of disguise and so he attends a meeting disguised as a Spider agent from London. However, the plan fails as he does not have the "microdot" - and Camellion has to fight his way out (which he does). He also gets info from one of the goons on when and from where the plutonium is being shipped. He heads to Marseilles and interrupts the shipment.

A few weeks later, Camellion plans to kidnap the Chief of Albania's Secret Police, Colonel General Epineska, and fly him to Greece in a stolen jet, to squeeze him for more information on the base. Two cars of men invade Epineska's country home and a terrific gun battle ends with the DM driving a tractor into the house and setting it on fire. Epineska escapes, so they take Lt. Korfuska as prisoner. (During the battle, the Death Merchant reveals to the Albanians that the Nazis are constructing atomic bombs in their Mount Karob hideaway.)

Epineska spends the next two weeks tearing the countryside apart, torturing and murdering innocent people for information, looking frantically for the DM. He also goes to Falcon I (the Nazis headquarters) for a surprise inspection. He orders the Nazis to dismantle their bombs, and they laugh at him. Meanwhile, Camellion meets with the heads of BND and outlines his plan to attack Falcon I. The other leaders call it a foolhardy plan - "why, such a venture is an affront to heaven". But can they sit idly by and/or negotiate with the Nazis? They cannot. Camellion's plan is to use only Russian arms and equipment, along with GRU-forged papers - so Russia will get the blame if the attack fails.

And so the Death Merchant and 15 others jump out of a plane in darkness, landing in the North Albanian Alps three or four miles away from the Falcon base. They initially plan on destroying a bridge along the one road up the mountain, cutting off the Nazis' supply lines. What the DM actually ends up doing is setting off a mammoth landslide, exploding thousands of tons of rock that come crashing down on tanks and trucks crossing the bridge, killing hundreds of "Heil Hitler halfwits" and "Master Race morons" and collapsing the bridge.

The DM and his men meet resistance when Epineska and about 80 soldiers land nearby and pour out of a helicopter, charging at the commandos. "The Albanians ran straight into a solid steel wall of 7.63 slugs, going down faster than haystacks in the path of a tornado!" The survivors get close enough that both sides are forced into hand-to-hand combat, with Camellion fighting Epineska, eventually throwing him off the edge of the cliff to his death.

When the fight is over and the Albanians dead, the question becomes: Can the Death Merchant fly the helicopter? Of course, he can! As they approach the Falcon base, it looks like a victorious Epineska is returning ... until the copter's guns open fire on the Nazis and tear shit up! After a rough landing, they commandeer two tanks and blast the mountain retreat's huge steel doors wide open and pour in, headed in with an armoured car and the tanks, guns a-blazing!

The Nazis are defeated. And although one atom bomb does explode afterwards, it is far enough underground or within the mountain that it apparently does no damage. Men on the surface feel only a "loud and mighty rumbling" of the ground. ... And the Death Merchant's mind is already filled with thoughts of his next mission - in Cuba.

Rosenberger outdoes himself when describing the Death Merchant's awesomeness:


He had heard about Le Marchard du Mort and didn't have to be reminded that the man before him was the world's deadliest man hunter and the most efficient killing machine in existence. ...

Rosenberger refers to Death as the "Pale Priest of the Mute People". It's an odd phrase. An internet search leads me to believe it's from Sir Frederic George Kenyon's poem "The Working Of Robert Browing":


Leave, as ye witness, all my wonted joy
In this dear dwelling. Ay - for here comes Death
Close on us of a sudden! who, pale priest
Of the mute people, means to bear his prey
To the house of Hades.

Although Rosenberger never gives readers any real idea of where the Death Merchant came from or why he does what he does, we learn in this book that Camellion lived in St. Louis, Missouri, as a young boy.
Posted by allan at 2:54 PM