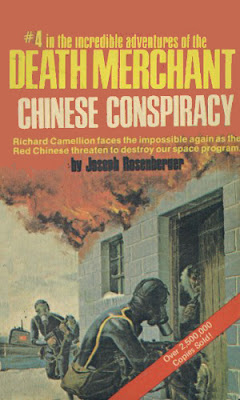 Chinese Conspiracy - my favourite of the four Death Merchant books so far - begins in a roadhouse just outside of Du Quoin, Illinois, where Richard Camellion is enjoying a cold glass of tomato juice. The Death Merchant is actually on vacation, working (for some unstated reason) as a game operator in a travelling carnival, "a holiday from intrigue, violence and sudden death".

[We get a decent description of the Death Merchant early in the book. He's in his mid-30s, weighs about 170, not big but well-muscled. "Kind of an ordinary-looking guy ... wore his hair in a kind of flattop, like a roof, over a face that was strong, the jaw firm, the nose rather delicate." And don't forget the chilling stare from his "icy blue eyes". We also learn that, in addition to tomato juice, he likes apricot juice. Still no background on his life or how he became the merchant of death, though.]

An attractive local woman needs help with her car and Camellion volunteers to help. Once outside and surrounded by five armed men, he realizes he has fallen into a trap. The Death Merchant's vacation is over! Camellion works steadily, incapacitating each goon, before getting some assistance from a mysterious stranger, who calls Camellion by name and says they need to leave the roadhouse at once. The stranger is Vallie "The Eye" West, a top CIA agent, and he tells Camellion that the Russians tipped off the CIA about a week ago that China sought to kill the DM because of his possible involvement in a CIA mission against China.

That mission, which Camellion accepts (of course) involves the launch of a U.S. space shuttle called Toro I, which will become the world's first space station. Dr. Berthram Goddard, the head of Project Toro, was recently kidnapped from Cape Kennedy by a "private" spy group hired by the Chinese. (Rosenberger makes a big point of noting that the "Orientals" were unable to pull off the kidnapping themselves, because they couldn't infiltrate Cape Kennedy undetected; they needed to hire some "white" agents that could blend in.) The kidnappers are under the direction of ex-Nazi Hans Hugo Kronsleiter, who tangled with the Death Merchant in Argentina six years ago. (We learn about this incident and why Camellion burns to exact revenge on Kronsleiter much later in the book.)

The U.S. believes Kronsleiter will try to smuggle Goddard back to China via Canada. China will then announce that Goddard has defected because he supposedly opposes the U.S.'s "imperialistic" actions in Vietnam - people will buy this line because his son is a conscientious objector living in Montreal - and when China destroys the space shuttle via missiles shot from a nuclear sub in James Bay, they will claim Goddard assisted in giving them vital information. The destruction of Toro I will be a huge blow to the U.S. space program and a tremendous propaganda victory for China. It's up to the Death Merchant to rescue Goddard and foil the plot.

I enjoyed this installment more than the first three. Because it's a given that the DM (who actually is referred to as the "DM" a couple times!) will survive and succeed - and so far (outside of the very end of The Psychotron Plot), he has not even been seriously wounded, which requires a huge suspension of belief - the fun in reading these adventure pulps comes from the intricacy and momentum of Rosenberger's plots and the utterly over-the-top descriptions of the Death Merchant's assaults and the resultant gore. A typical example:


The Death Merchant tilted the .357 and fired through the financial page of the Moosonee Herald, the blunt-nosed slug popping the Chinaman's head. Chips of skull bone and fragments of brain splattered against the door frame as - almost without a head - Chang melted to the floor, spraying fountains of blood which made a mess of his snow-white parka. He had been born without hope, in a no-name spot of northern China. Now he died without a whimper.

The narrative in Chinese Conspiracy zips right along and Rosenberger gets creative while describing the violence: "... his belch gun chattering faster than an auctioneer ... the slugs ricocheting and zinging like steel popcorn".

One aspect of these books that could get ridiculous after awhile (or, more likely, already has) is how close Camellion comes to getting shot. His secret for survival is to always keep moving, so that when the enemy fires "a line of slugs" or a "river of hot steel", the bullets hit in the spot he vacated only a fraction of a second before. Slugs whizz past his cheek or he feels the bullet nearly part his hair; they never do more than graze him, inflicting painful, but minor, wounds.

Also, Rosenberger calls upon every Asian slur he can think of. Camellion sprays bullets from his Schmeisser machine gun like water from a garden hose, chopping the Chinese gunmen "into Oriental goulash" and "chunks of chop-suey" and sending them instantly to all their "rice-eating ancestors". Later, after Camellion kills a female member of the Chinese contingent, Rosenberger writes: "Sorry, sister, but you should have stayed back home in the rice paddies!" The face of one of the Chinese generals is "shining like pale butter" and someone else is described as "lemon-faced".

In the previous book, The Psychotron Plot, Rosenberger threw epithets at the evil Russians, but since the Soviets are working with the U.S. in this volume, he's completely silent in that regard. Instead of "lovers of Lenin", we get "Mao-morons". At one point, Rosenberger writes that Camellion's submachine gun "chattered loudly, the .45 slugs snarling a Japanese-sandman song of death". ... Yeah, Japanese, Chinese - same difference!

There are three epic, highly-entertaining gun battles in Chinese Conspiracy: at the Chinese embassy in Ottawa, at an abandoned Canadian weather station on North Twin Island on the southern end of Canada's Hudson Bay, and on Dragonfly, the nuclear submarine carrying the missiles intended to bring down Toro I. [Wikipedia says the actual North Twin Island is uninhabited, but Rosenberger has a small tribe of Ontagla Indians (a fictional tribe, apparently) living on one side of the island.]

Finally, one completely unexpected scene: Fairly early in the book, Camellion is knocked unconscious in a fight and wakes up in a casket in a funereal home basement, with his hands cuffed behind him. Despite his limitations, he is able to access some lock-picking equipment that he has conveniently stored in his rectum! He forces the container of tools out, opens it up, and uses the proper tool to pick the handcuff lock. Then he puts the container back up his rectum, and awaits the return of the bad guys. Rosenberger presents this as nonchalantly as if Camellion had simply reached into his pocket.
Posted by allan at 2:09 PM