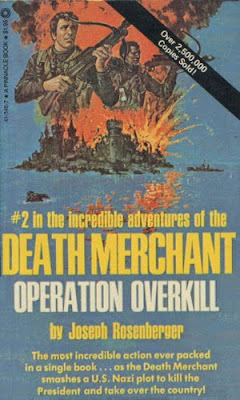 Billionaire Cyrus Carey and the ultra right-wing group the Knights of Vigilance are plotting to assassinate the President and Vice President of the United States, and institute a fascist government. While the Halloway administration is aware of the plot, it does not have enough hard evidence to move on Carey or his group. So it's up to Richard Camellion - the Death Merchant! - to stop the planned bombing of Congress when the President opens the latest session in the fall.

After doing some dirty work for the Chicago Mafia in the previous book, Camellion is now working for the National Security Agency. He has spent six months attempting to infiltrate Group D in New York, the largest KoV cell in the United States. All that goes to shit, however, because there is a spy somewhere and Dana Redd, the leader of the Group D meeting, knows who Camellion is. While being taken down to the warehouse basement to be roughed up, the Death Merchant, who has a gun secreted on him, makes his move and slips out of the Knights' custody. A gun battle erupts in the warehouse and Camellion kills four men before setting fire to the whole place and escaping.

With his cover blown, the Death Merchant believes that his only option to prevent the assassination is to storm Carey's four-story stone castle, located on an island in Muscongus Bay, off the coast of Maine, a fortress the locals refer to as "our Alcatraz". But because of the existence of the spy, Camellion becomes tight-lipped about his plans, laying a cover story that he is lying low or perhaps even giving up. (The identity of the spy can be one of only three people, but Rosenberger draws out the mystery for nearly the entire book.)

Glorious Trash blogger Joe Kenney has reviewed a number of DM novels from much later in the series (as well as many other adventure series and assorted tawdry books from the '70s): "Rosenberger has a habit of using his books as forums for his own political and personal views." The action-adventure genre certainly leans towards U.S.-centric jingoism and gun-porn, so I assume that Rosenberger was seriously conservative. However, two books into the series may be too early to get a handle on Rosenberger's politics. Kenney also notes the similarities between the names Richard Joseph Camellion and Joseph Richard Rosenberger.

Because the book was published in 1972, communism takes more than its share of barbs. President Halloway is disturbed that "native-born Americans" are behind the assassination plan. "I can understand the Marxists and their subversive methods - but this!" Carey's plot will save America from "the hell of Socialism" that Halloway is trying to institute. Various high-ranking military officers, along with two Senators, are in on the plot, and at a meeting with Carey, they all bemoan the fact that America is losing to the Soviets because President Halloway has cut defense spending in favour of social programs and other reforms! (Man, this IS fiction!)

Carey wants to create the Nazi States of America. Under his rule, society's undesirables would be weeded out through a "Doctrine of Fatherly Neglect". Squads of Peace and Protection Watchers would limit dissent by machine-gunning protesters. It's all so over-the-top. I sensed a definite Dr. Strangelove vibe to this exchange:


Becoming emotional, Dana banged his fist on the table and half rose from his chair. "I'm telling all of you, we're going to take a lesson from what happened at Kent State! We're going to teach the college bastards that they can't revolt and throw bottles and bricks without expecting retaliation! I'm working on the practical theory that the only good revolutionary is a dead revolutionary. You cannot reason with violence. You stomp it out. You kill it!"

"Very logical," Senator Blair said with enthusiasm. He puffed contentedly on his cigar.

Camellion teams up with Luther Jackson, a former Vietnam vet and a sleeper agent running a pawn shop in Harlem as a front. Camellion shows up disguised as a black priest, having taken a pill - "a derivative of dichlorobenzene and benzenesulfonic acid" - that turns his skin pigment dark. (Jackson marvels: "You look more spade than I do!")

Camellion explains his high-risk plan to attack Carey's fortress. Jackson thinks he's totally nuts, but of course, he agrees to do it! Because of the Death Merchant's involvement in trying to smash the plot, Carey moves the assassination date up a week. At 3 AM of the day Holloway is to be murdered by two members of his Secret Service, Camellion and Jackson begin their mission. The two men scuba dive out to the island with various weapons, grenades, and whatnot. The attack goes smoothly, considering the supposed intensity of Carey's security team on the island, and is a bit anti-climatic.

Naturally, Camellion makes a mess of numerous goons throughout the book:


The big revolver boomed, and quite suddenly Scott Kaddle had only a part of a head! The big steel-jacketed slug slammed into his forehead, instantly erasing his ugly features and scrambling his brains like a couple of dozen eggs. ... Scott dropped from the world of the living, melting to the floor, then sliding into Hell with a swiftness that must have astonished the Fallen Angels.