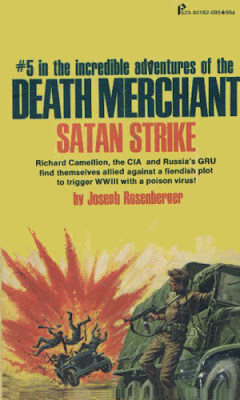 In Satan Strike, the dictator of Bonheur, a small Caribbean country, develops a highly-infectious and deadly virus he dubs "the Satan Virus".

Jean Pierre Duvessalines's plan is to release the fast-acting virus in a handful of Soviet cities and blame the United States for the millions of deaths. Russia will then retaliate against the U.S with nuclear weapons, and the U.S. will defend itself similarly. After the two superpowers are destroyed, the megalomaniac Duvessalines, armed with the virus as the ultimate weapon, will rule the planet.

While Duvessalines's plans for world domination are somewhat dubious, Joseph Rosenberger still comes through with a solid installment of The Death Merchant, mainly because several battle scenes are so good.

Bonheur shares a 129-mile border with the Dominican Republic, and is clearly meant as a stand-in for Haiti. Duvessalines gets his name from Jean-Jacques Dessalines (Haiti's first leader, who led the first successful slave army revolution, defeating the French at the Battle of Vertières in 1803) and François "Papa Doc" Duvalier, who ruled Haiti from 1957 until his death in 1971, a couple of years before this book was written. For anyone who has still missed the similarities, Duvessalines is nicknamed "Papa Pierre". (Also, the name of Duvessalines's virus recalls Alistair MacLean's The Satan Bug (1962), a thriller that also featured an infectious, fast-killing virus.)

Satan Strike begins with a bang, as Richard "DM" Camellion and a group of Libre Nationales are under heavy gunfire from the Tonton Macoutes as they try to break Joseph Parsi out of prison. Unfortunately, Parsi - who discovered the virus plot - dies before he can reveal any additional information about Duvessalines's plans.

The CIA has (in good faith) told the Russians about the existence of the plot and the two governments have agreed to secretly work together to stop Duvessalines. The two Russians agents are Boris Yushkik, who has a reputation nearly as famous (or infamous) as the Death Merchant, and Irina Golbov, who can speak seven languages and is "more than adept at the ageless art of seduction". I'm not clear why Rosenberger bothers to mention this, as it doesn't come into play at all (although she and the usual asexual Camellion do apparently mess around).

Camellion and Golbov pose as American tourists who have come to Bonheur to see and collect butterflies. After meeting up with Father Georges (one of the prime contacts in town for Libre Nationale) at the Holy Name Basilica, they are ambushed by six men in their hotel lobby. Camellion and Golbov spring immediately into action, using specialized weapons like a cane with a six-inch switchblade and a cigarette lighter that fires small caliber bullets. They lay waste to the hit men - "Irina made them jerk and jump to a staccato dance of death, chopping them to morgue meat with a dozen or more slugs" - and kill several more that rush into the hotel from hiding places outside. They also blow up a packed car. In all, more than 20 Comites are killed.

Meanwhile, Duvessalines and his former college friend, Dr. Eugene Vismer, both experts in biochemistry and bacteriology, are testing a possible antidote on innocent Bonheurnians who have been seized and strapped to a conveyor belt in the sealed testing room. After being inoculated with the Cx4 vaccine, they are exposed to the Satan Virus. Victims usually die within minutes, but these men and woman live for nearly two hours before dying. (The conveyor belt then transports them to a crematorium.) So it's back to the drawing board for the evil JPD, who is described as "a midget Hitler, only ten times as cruel".

Camellion susses out that the lab is most likely hidden in the Citadel de la Mantaire, a former tourist attraction that has been shut down. After a series of epic shootouts, including one at a remote plantation in which Camellion and a Libre Nationale member end up wiping out 113 Comites (!), Camellion announces that an armed assault on the fairly impregnable Citadel is essential or the virus will be loosed upon the world. The plan ends up being very similar to what Rosenberger dreamed up in his previous volume, with a number of jets strafing the area with napalm and bullets before a bunch of DM-led commandos land at the Citadel and shoot and fight their way up to the fifth-floor lab.

The Russian agents plan to let the Death Merchant do his thing and save the day, and then steal the formula for the virus for themselves! But Camellion anticipates their double-cross and ends up destroying the filing cabinet containing the paperwork on the virus and the vaccine, stating:


The world's better off without that Satan Virus. We've enough instant death with thousands of H-bombs!

We also know from various comments in the earlier books that Camellion (i.e., Rosenberger) is virulently anti-religion. Camellion and Golbov - out in their disguise as vacationing Americans - observe a voodoo ceremony performed for the tourists. Irina remarks that it's


paradoxical that voodoo can exist side by side with Christianity. ... But I suppose that's only natural. Religious superstition and priestcraft have always been used by the capitalists as a means of motivating and controlling the proletariat.

Camellion says that in Bonheur, voodoo supplements Christianity. He adds:


"Not that it makes any difference because only a dedicated masochist could believe in either one!"

"Precisely!" Irina said smugly. "Religion is the opiate of the people!"

The Death Merchant smiled. "Marx would have done better to take a bath more often instead of rattling about things he didn't really understand. Man had to invent God. As man progressed in education, as he began casting off his ignorance, the Renaissance shift from God to humanism followed the reasoning of classical Epicurean nihilism."

Then they walk off and the main story picks up again! (Later books in the series have Rosenberger interjecting his own opinions on a variety of matters, complete with footnotes!)

In the first five books, Rosenberger has not revealed much about Camellion's background or how and why he became the Death Merchant. In this volume, we learn a few small factoids: Camellion enjoys cold tomato juice and eating raisins out of the box.

Nostalgia Note: There is an advertisement for Kent cigarettes bound into the book between pages 96 and 97! This was once common practice for certain paperbacks in the 1970s, after a federal ban on cigarette advertising on television and radio was instituted in 1969.
Posted by allan at 11:30 AM