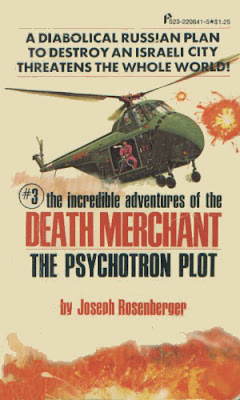 The Russians have been doing significant research into "biochemistry, neurology, [and] electrical engineering" at a secret base in Egypt, experimenting with a machine known as the Psychotron - "a weapon that, by interfering with the electro-magnetic field of the human body, particularly of the brain, can cause delusions, hallucinations, and even death".

The Psychotron has already been tested on a small village in the Sinai desert, and more than 100 people were driven insane. At the present moment, the machine, colloquially known as the Mind Blaster, has a range of only 20-30 miles, but the Russians are working feverishly at expanding its range.

CIA Director Jacob Hemms, talking to Richard Camellion, aka the Death Merchant: "But I have more bad news ... When perfected, the Mind Blaster will be capable of telepathic hypnosis! Do I have to tell you what that means? Should the Russians ever be able to hypnotize thousands of people - even millions, to be able to turn entire populations into robots who would be complete mental slaves ... they could very easily enslave the entire world!"

Camellion is momentarily stunned at the thought of the Psychotron being aimed towards the large East Coast cities and tens of millions of Americans "helpless against the perverted will of their Communist masters". Hemms explains that the CIA wants the Death Merchant to travel to Israel and work with the Shin-Bet to (a) find the secret base in Egypt, (b) destroy the Psychotron, and (c) kidnap Dr. Yuri Popvikin, the machine's diabolical inventor.

The Russians attempt to kidnap the DM when he arrives in Tel-Aviv and while they get him in a car and drive away, he overpowers his attackers, killing one and taking the second gunman (and the driver) prisoner. When the kidnappers fail to arrive with Camellion in tow as expected, the Russians know something is up, and they fear the surviving gunman will talk. Camellion rightly intuits that the Russians will now close up their Tel-Aviv cell and "go deep black", setting back the CIA's search for the Psychotron; why the Israeli intelligence people do not also realize this obvious fact is a mystery.

The Death Merchant wants to raid the shop the Russians are running as a front ASAP. He and Israela Diamant, the head of the intelligence section in Jerusalem, pose an elderly couple, two tourists looking to purchase some religious items. (Camellion harbours serious doubts about working with a woman - they "were so damned undependable!" - but Diamant acquits herself well in the ensuing battle and the DM actually apologizes for doubting her!)


A voice of caution whispered within the Death Merchant's brain, quietly telling him that the Catholic Shop would not be easy to take, that the possibilities for the escape of the Russian agents were numerous. ... Richard knew that an old friend would be with him and Israela every second - DEATH!

Several "lovers of Lenin" are killed during the raid - one, shot in the head, "found himself in the middle of Hell, sitting stupidly on Stalin's hot lap" - and Camellion brings back two additional prisoners. One spills that the Russians are attempting to smuggle a portable Psychotron into Jerusalem. He also says only a few people know the location of the secret base: Colonel Kagorin and some of his aides, and Hasan El Assad, Egypt's Minister of the Interior (though El Assad doesn't know that he knows; he thinks the base is a meteorological station).

Someone laughingly suggests that all they need to do is go to Egypt, kidnap El Assad, and squeeze him for the location of the meteorological station.


"That's exactly what I plan to do!" the Death Merchant said ...

Five pairs of eyes turned to Camellion in amazement. "You can't - you're not really serious!" Langbein asked. "Such a wild scheme couldn't possibly succeed. Why, even you couldn't bring it off, Camellion."

Israela smiled softly to herself. She knew the Death Merchant meant what he said. He was that kind of man - to grab the impossible and twist it into reality!

It all works according to plan. A few more "hammer & sickle slobs" are wasted and, under threat of torture, El Assad gives the location of the supposed weather station.

A plan of attack on the Mind Blaster base is outlined. Five planes will attack the area with napalm and phosphorous bombs - "like avenging angels from some Jewish Apocalypse ... scattering death" - then three helicopters with roughly two dozen commandos will fly in for the ground attack.

Russians tanks greet the commandos, but our heroes have little problem blowing them up. They commandeer one tank and drive it into the compound. Amid the rubble of the base, Camellion spots a trap door that leads down into an anti-chamber and, further on, the Psychotron room. He says he'll go down alone: "I'll have more fun than a part-time sweet potato salesman". (??)

With the trap door closed behind him, it's pitch black, but Camellion has "The Box", a CIA radar penetration device that can see through brick and cement. It also works as an infra-red device, so he can see the various Russians hiding in the dark, waiting to pounce. He methodically kills the various agents (or "Ivans", as they are often called). "The Death Merchant almost felt pity for the Commie crackpots as he opened fire, his UZI chattering faster than a group of old maids discussing an X-rated movie!"

In the climatic battle, Camellion battles Colonel Kagorin in hand-to-hand combat before Kagorin falls back into the Psychotron's "furiously spinning balance wheel". His arm and leg are sliced off and he is decapitated, with his head flying across the room like "a comet with a spraying red tail". After Camellion's group apprehends Dr. Popvikin, the Death Merchant puts packs of explosives on the Psychtron and sets the timers.

The group has suffered casualties. Of the 27 commandos that began the fight, only seven remain, and all of them are wounded. Camellion himself has suffered several wounds, though none are life-threatening. However, soon after the copters take off, Camellion is hit with either a slug or shrapnel, and he passes out.

The story resumes as the Death Merchant decides he is well enough - he was taken to a hospital on a kibbutz and has been recovering from his wounds - and simply leaves the compound, literally walking off into the sunset, as the Chief of the Shin-Bet remarks:


It's a stupid world, a violent world filled with greed and hate and prejudice, but now and then there's a tiny flash of justice. I guess you could say that men like the Death Merchant are part of that justice.

This third installment sounded promising, but the book somehow never really got going. The back story of the Psychotron was weak - we don't see much of the Russians working on the machine at all - and the only time the narrative really came alive was during the climatic battle.
Posted by allan at 6:06 AM