Tucker Carlson Is Literally Losing His Mind Over Chauvin Verdict, Stating That Punishing A White Man For Casually Murdering A Black Man In Public Is "An Attack On Civilization" 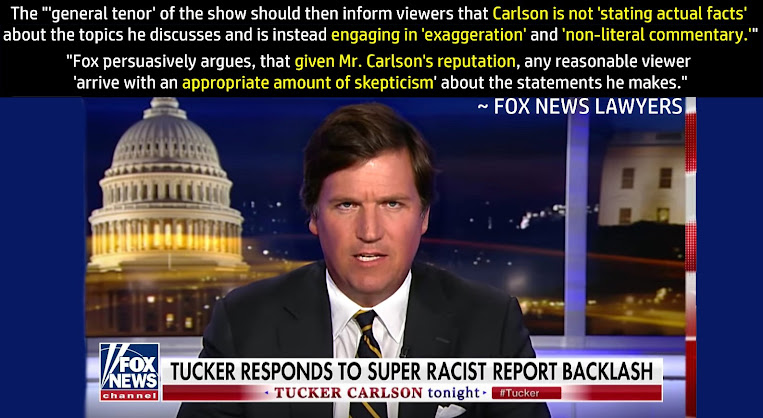 On a scale of 1 to Mein Kampf, how racist will Tucker Carlson be tonight?

Tucker Carlson will be completely incontinent by 8pm showtime. I’m going to tune in just to watch him shit himself.

Tucker arriving at the studio......... pic.twitter.com/qOKZaOddt2

Tucker Carlson is vile. I'm disgusted but not surprised he would stand with a killer then, just as he does today. https://t.co/nL7RvjhawC

Tucker Carlson started laughing like the Joker, threw his own guest off the air, and then proceeded to spew conspiracy theories about his own high school yearbook, if you’re wondering how his night is going

Tucker Carlson is very mad that his plan to spend weeks attacking the press, BLM, Democrats, and some Republicans for caring about George Floyd's death fell apart. pic.twitter.com/NQrPLjNL5h

Tucker Carlson did not disappoint: complete one-hour meltdown of white whine, blaming everyone but Chauvin for his conviction, and denying systemic racism exists. He even cut off a NY correction officer. https://t.co/gsaOt2HRsP

Tucker Carlson reacts to Derek Chauvin's conviction by characterizing public support for Floyd as "an attack on civilization" pic.twitter.com/kfY1NedNu2

“No mob has the right to destroy our cities.” ~Tucker Carlson pic.twitter.com/91pw3gxs1P

The way in which Carlson short-circuits, laughs manically, and cuts off a guest who doesn't follow the party line on Chauvin (don't talk about what he did, but how unfairly he has been treated) is pretty telling. https://t.co/icqu2YVKhC

Rejected CIA candidate, Tucker Carlson, demonstrates why Christian Bale’s American Psycho Killer character is rumored to be based on him. pic.twitter.com/sUmLlItkoc

A guest tried to say something sensible on Fox News. Tucker Carlson cut him off. Maybe there’s some sense at Fox—some fear at Fox—that reality is threatening to break through to some of their audience? And if course they can’t let that happen... https://t.co/F24IGYSQH0

This is just such horseshit. Conservatives who are vaguely mad about black activism but can't actually argue for Derek Chauvin's innocence have fallen back to this theoretical argument that the jury was under undue pressure. https://t.co/PEOfLFAC9o

On Tucker, Candace Owens calls the Chauvin verdict "mob justice" and declares that "this was not a fair trial. No person can say this was a fair trial." pic.twitter.com/A9OtJaKa9K

This is a remarkable statement from DeSantis considering there’s a 10 minute long video of Chauvin killing George Floyd. It takes a lot of gall to suggest convicting him wasn’t the just outcome. https://t.co/bSErh9AVQb

Even setting aside morality, the smart political move on the right would have been to throw Derek Chauvin under the bus. Instead, many of them are clamoring to claim him as a martyr. https://t.co/xxGNSlM113

Conservatives have a long history of strategically condemning the worst people in their tribe, so they look better by comparison. They could have done that with Chauvin. But instead, they're so overcome with racist anger they've lost their minds. pic.twitter.com/V2qKXWmJFr

Painting Chauvin as the victim of a "woke mob" is about as believable as claiming Ted Bundy is the victim of feminist overreach. But modern conservatives have lost all sense of what is "too far". This is a year where they dismissed a pandemic that's killed half a million! pic.twitter.com/jXdgp1xwuu

There has been serious GQP talk of Carlson running for president in 2024.

I'd strongly suggest she was already sick ..... VERY sick