The Pleasures Of Reading In An Age Of Distraction, By Alan Jacobs 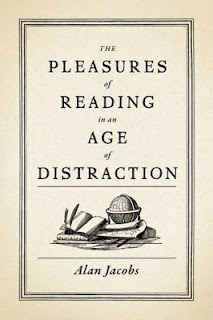 "We read what we want, when we want,
and there is no one to assign or to evaluate."
According to Alan Jacobs's short (162 pages) but insightful and utterly wonderful book, published in 2011, we should strive to be "free readers", to jettison the idea of the "guilty pleasure", with its implication of doing something wrong, and read what gives us delight and do so without shame.

Jacobs explores many facets of reading, including the invention of silent reading, the challenges of reading responsively, the distinct pleasures of rereading, and the pros and cons of digital reading. While mulling over how reading is presented in school - as a chore, a stressful obligation, or because it is good for you, like broccoli - Jacobs says it's a minor miracle how anyone ever becomes a reader, someone who does it because she loves it and can't not read.


[W]hat reading teaches, first and foremost, is how to still for long periods and confront time head-on. The dynamism is all inside, an exalted, spiritual exercise so utterly engaging that we forget time and mortality along with all of life's lesser woes, and simply bask in the everlasting present.

Jacobs talks about collaborating with a book while in this state. "The book you read - or whatever you read - becomes your ally and your chief support as you take ownership of your inner space and banish those forces that would rule your consciousness." It is an awesome amount of power from a series of black symbols on white pieces of paper.

Jacobs stands firmly on the same side of the cultural street as C.S. Lewis and G.K. Chesterton and opposite "the Vigilant school" of judgmental literary snobs like Harold Bloom and (in earlier decades) F.R. Leavis, those self-appointed guardians of literature, announcing which books are worthy of being read, and how they should be read.

Bloom's puritanical disgust and contempt for most readers is well-known. In 2007, in response to the massive sales of the Harry Potter books, Bloom sniffed, "I know of no larger indictment of the world's descent into subliteracy." To spend time with one of these books was to not actually read, according to Bloom, but to merely pass one's eyes across a page. In case you are curious, back in 2003, Bloom listed only four active American writers who "deserve our praise": Thomas Pynchon, Philip Roth, Cormac McCarthy, and Don DeLillo.

Jacobs mentions Mortimer Adler's How to Read a Book (1940), which, although the title sounds elitist, has a populist message: you do not need a university education in order to be a skillful reader of even the most challenging texts. Some slight guidance from a confident instructor (like Adler, for example) could put you on the path to erudition.

Jacobs is admirably non-judgmental. "The person just beginning to bring some discipline to his or her life as a reader need not be ashamed at reading non-masterpieces, or at only being able to focus on reading a few pages at a time." After all, a sedentary person would not - indeed, could not - leap off the couch and promptly run a marathon.

Jacobs highlights the three things we look for when we read: information, understanding, and pleasure or joy. Each of these reasons are equally valid, one not more important (or "better") than the others. However, there is something to be said for reading "upstream", for looking back to the works that inspired our favourite writers, rather than reading "downstream", finding lesser works that come in the wake of those favourites.

Very little of our growth as readers can be planned; it is unmethodical and unpredictable. "We must be content to be guided by the invisible hand of serendipity." Jacobs also uses the term "accident sagacity". Jacobs believes that serendipitous chance encounters and discoveries remain possible in the age of Google/Amazon. I'll agree with him on the idea of clicking from link to link on the internet, ending up somewhere interesting, but not quite able to retrace your steps and remember how you got there, but I'm skeptical that something like Amazon's "People who bought this book also bought" feature can approximate wandering around a sprawling used book store.

Jacobs also includes a few good quotes showing that people in the 17th century felt a similar flood of information (and books to read) as we do today. When discussing the need for silence in order to read deeply, Jacobs cites Bruce R. Smith's The Acoustic World of Early Modern England which makes the case for an utterly cacophonous world 500 years ago. (All of this sounds utterly fascinating to me.)

I've done a poor job of explaining or showing the delights of this book, but I think if you like reading (and especially the idea of reading), you'll enjoy any time spent with this book.

Dept. of Baader-Meinhof. Jacobs mentions Patricia Meyer Spacks, whose book On Rereading (2011) I also borrowed from the library. (Peter Toohey's Boredom: A Lively History - which was not as engaging as I had hoped - also mentioned Sparks.) Jacobs refers to C.S. Lewis (he has written a biography of Lewis) and I just finished reading Lewis's extended essay An Experiment in Criticism (1961). Jacobs mentions that he has finally read G.K. Chesterton's The Man Who Was Thursday, a 1908 novel which was cited in two books by John Carey that I recently purchased: The Intellectuals And The Masses (1992) and What Good Are The Arts? (2005). (I was reading all of these books hoping to get a firmer handle on the idea of high and low culture, when those distinctions were invented, how they have been perpetuated, and how they hold sway over us even now. Also: what constitutes a work of art, and do works of art have any more intrinsic value than something that might not be considered "art"?)
Posted by allan at 11:03 AM

Embracing "genre reading" and the serendipity of the discovery of authors are a some of the gifts of reading I've been aware of recently. This book sounds really cool.

Those are all intertwined just in reading this blog. My favorite science-fiction writer is Gene Wolfe, a guy who writes books that are somewhat difficult to digest on the first reading, contain many puzzles, word play, and historical associations. In the shorthand of the language used to describe authors and genres, he's a literary science-fantasy dude.

He skewers the idea so prevalent today that serious, praised fiction is contemporary fiction written present-day, real world figures. "The adventurous reader has probably already moved past realism...It is archtypically the story about the college professor who is married to the other college professor." Now, Philip Roth has done some novels about the married college professors. I think he's such a good writer that it doesn't matter what he writes about, it will be pretty good anyway, but it's not an interesting subject. Updike...I haven't read these guys a lot. I think I could probably stand to read them more than I have, but defining it as what a person ought to read seems limited at the least.

Wolfe also says that science-fiction is the mainstream of literature in the long run; it's only now the Blooms of the world value contemporary realism so much. From Homer to Dante to Shakespeare, it's mostly genre stuff with some degree of fantastical elements.

Great post. I like what Zenslinger says about genre reading, too. But I really don't get making a case for science fiction being "the mainstream literature of the long run" any more than I get Bloom's snobbery.

There's miles and miles of mainstream lit that's realistic - not a few writers limping along, not just Roth and Updike and Cormac McCarthy, but hundreds, thousands of writers, zig-zagging all over the map of human experience. Reducing all fiction-that-is-not-sci-fi to one thing called "realism" is a bit ridiculous.

Why must one form be ascendant? There's room enough on the shelves and in our minds for the full spectrum.

You've actually done an extremely good job articulating the pleasures of this book! You are one of those accidentally sagacious people.

Jacobs also includes a few good quotes showing that people in the 17th century felt a similar flood of information (and books to read) as we do today.

Ding ding ding! I wrote a paper about this. I made a case for the shock of the flood of material from the early decades of printing being more of a cultural shock, relative to what came before it, than the internet was to us. Cross-reference Elizabeth Eisenstein.

I'm reading Bill James' 'True Crime' right now, which I certainly would never have found without the baseball connection. Not surprisingly coming from James, it is extremely quirky, rather subversive of received opinion and conventional wisdom, and extremely interesting and informative about the USAian legal system.

One of the things he claims is that the USA was drifting toward civil war by 1915, war between labor and capital, poor and rich.

Not that you will have time with your 2004 on its way.

I read it in late 2011 or early 2012, I think. James is always entertaining, even if I don't agree with him. I vaguely remember that bit about civil war. I also recalling having written a huge amount of notes, but I don't think I ever posted about the book.