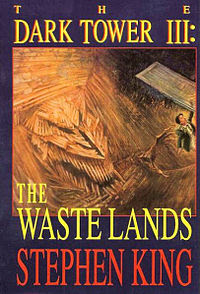 The actual quest for the Dark Tower begins in earnest in The Waste Lands - the third book in the series - and I remain quite cool towards what King (and many of his fans) views as his magnum opus. I have liked most of King's books so far in this project, but the fantasy novels are proving a tough road to hoe.

First, what happens: Roland the Gunslinger and his two fellow travellers - Eddie Dean and Susannah Dean - help Jake Chambers cross through from 1977 Brooklyn to Mid-World. The foursome (along with a doglike creature named Oy) then make their way southeast along the path of the Beam towards the elusive Dark Tower, encountering some serious trouble within the decaying city of Lud before earning a ride through the Wastelands aboard Blaine the Mono. (For a much more complete overview of the book, check out Kev's synopsis here.)

Besides some silly and juvenile stuff that gets in the way of enjoying the narrative - the war drums that echo throughout Lud are from ZZ Top's "Velcro Fly"; one of the warring factions in Lud is known as the Pubes - I feel like King has written a lot of this before. The Mansion (the portal through which Jake joins the others) is similar to the Martsen House ('Salem's Lot) and, to a lesser extent, the Overlook Hotel (The Shining). The barren and nearly-uninhabitable Waste Lands sound a lot like the Blasted Lands (The Talisman). Randall Flagg (The Stand, Eyes of the Dragon) makes a cameo late in the book, taking an interest in the wounded Tick-Tock Man.

More importantly, King's writing is often weak, falling back on descriptive cliches that he has used in earlier books. And he has a bad habit of over explaining things, as though he does not trust his readers' imagination. Here is a perfect example of King's excessive description (of the man-made tunnels, warrens, and labyrinths in Lud):


Now they were going downhill, and the walls of tightly packed paper had given way to ramparts of filing cabinets, jumbles of adding machines, and piles of computer gear. It was like running through some nightmarish Radio Shack warehouse. For almost a full minute the wall flowing past on Jake's left appeared to be constructed solely of either TV sets or carelessly stacked video display terminals.

That second sentence does nothing but slow down the narrative. King tells us what the scene is similar to, right after he tells us what the scene actually is. Coming across several of these examples (which often come with a brand name included) makes for a maddening reading experience. Reading this book and the previous volume (The Drawing of the Three) made me fervently wish an editor had gone over the manuscript one final time and removed these, and similar, extraneous words.

Roland becomes more nuanced in this book, showing signs of humour, patience, and tenderness. Eddie matures in his role as fellow gunslinger, mid-wiving Jake into Mid-World. Sadly, King still has trouble with his female characters, as Susannah is not shown experiencing similar growth. While Eddie works hard to get Jake safely through the portal, Susannah is left to distract the spirit being that aims to thwart them by having sex with it. (Granted, if the spirit had been female the task of seduction would have fallen to Eddie - no gay sex in Mid-World, please! - but the fact is that it doesn't. And much of the lead-up to Jake's arrival clearly points to Eddie as being the person in charge.) Late in the book, however, Susannah does solve Blaine's "prime" riddle and enables the gang to get on board the monorail.

In an author's note, King promises a fourth volume "in the not-too-distant future". Fans would have to wait until 1997 - six years! - to find out what happens next to Roland and his ka-tet.

This book is well received by fantasy fans?

What you touch on here is the prime weakness in King's writing, and when he's doing his best writing, he doesn't as much of it: the overexplanation. I'd have to read something that has really stood up for me -- like The Shining -- to see if it's there or not. Dome is rife with it (I've started skimming parts). It's exactly that -- it's like he doesn't trust you to get the point, and has to make everyone understands. You do have to repeat yourself in fiction for points to get across, but you usually try to wait a while.

As I may have mentioned, I read these as they came out. In my memory, Dark Tower 2 is where things really get going (given that the other characters show up), and this one (#3) was just a bunch of traveling, conflict, and monsters that didn't have too much to recommend itself. But I haven't gone back to read the whole thing again. It seems to me that 2, 4, 5, and 7 are the good ones. If you don't dig the fourth one (largely a story of Roland's younger days), you might want to abandon your own quest here. That and the fifth book just kick ass.

This book is well received by fantasy fans?

Yes, I think a lot of fantasy fans like the series. It's the flavor often known as science fantasy, which distinguishes itself by including elements of both sci-fi and fantasy. Straight fantasy or heroic fantasy is, of course, associated with only medieval rather than mixed levels of technology (Lord of the Rings). Swords and Sorcery is the subgenre (Conan, etc.) that's fantasy but focuses on individual hero's grittier exploits rather than grand events.

The Dark Tower is also heavily influenced by the further science-fantasy subgenre known as the Dying Earth (named after a cycle of stories by Jack Vance).