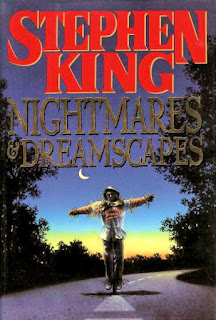 This is Stephen King's third collection of short stories (and other writings), after Night Shift and Skeleton Crew. The hefty 816-page book includes stories published over a period of approximately twenty years (1971-1992), and five previously unpublished pieces.

It also includes two pleasant baseball-related surprises: "Head Down", an essay he wrote for The New Yorker about his son's Little League team and its drive towards the Little League World Series, and "Brooklyn August", a 1971 poem about the Dodgers.

N&D - like each of King's short stories collection - is a mixed bag. I definitely enjoy his novels more. Here are some notes on a five other stories:

Dolan's Cadillac: A modern version of Poe's "The Cask of Amontillado". A mobster named Dolan has the narrator's wife murdered before she can testify against him at trial. The husband, a schoolteacher, spies on Dolan for seven long years, learning every one of his routines, and slowly conceives of a wild plan to bury Dolan alive in his Cadillac.

The Night Flier: Richard Dees, a writer for the tabloid Inside View - he played a minor role in The Dead Zone - tracks down and confronts a serial killer who has been flying a Cessna up and down the East Coast, murdering people in small, rural airports.

Popsy: A man with deep gambling debts scouts out a shopping mall and abducts a six-year-old boy in an effort to pay off his debt. This is prime suspense/horror, and would have made an excellent beginning to a novel. But the short tale falls apart when we learn the boy's Popsy is also some sort of pterodactyl, who rescues the boy and kills the abductor.

The Moving Finger: Howard Mitla hears tiny scratching sounds from his bathroom and assumes there is a mouse in the tub. Upon actual inspection, he sees a human finger poking up out of the sink drain like "an organic periscope". Howard believes he is hallucinating, since his wife Violet is unaware anything is wrong. But as the finger grows, Howard realizes he needs to take drastic action to stop it. King, from his Notes: "My favorite sort of short story has always been the kind where things happen just because they happen. ... I hate explaining why things happen".

Rainy Season: Every seven years, on June 17th, the small town of Willow, Maine, is inundated by a thunderstorm of large toads. Very hungry toads with extremely sharp teeth. Long-time residents know to stay inside and shutter their windows. John and Elise Graham arrive in Willow the day before, and are warned to stay out of town for the night. Naturally, they think the locals are joking with them and they drive off to the house they have rented for the summer. ... They should have taken the locals' advice.

But the short tale falls apart when we learn the boy's Popsy is also some sort of pterodactyl, who rescues the boy and kills the abductor.

This is hilarious. Classic What-not-to-do, but fantasy, horror, and sci fi writers do it all the time, with great success.

I hate explaining why things happen".

They never have to explain.

Not sure if you have much time for this project, Allan. But just to update you on my Stephen King life: my faith is somewhat restored. After all but hating Under the Dome (though I often begin to dislike books I plow through while lying in bed with a cold), I am happy to report his return to The Dark Tower called The Wind Through the Keyhole is excellent. That's my view, at least. I enjoy the feel of the DT books (some more than others, as I've said) as much or more than the stories, especially those that take place in Mid-World. The way people talk and the post-apocalyptic feel gave me a lot of enjoyment of books 4 and 5 especially. Since this one is characterized as DT 4.5, perhaps it's no surprise.

The project has been put on semi-hold because of the 2004 book.

Plus, I have been struggling to finish Insomnia. I really don't like it at all.

Glad you have better things to concentrate on!

Popsy was my favorite story in that book. But I thought he was a vampire because King mentioned in an interview that he maybe the same one from The Night Flyer.