The Air Force dumped the incinerated partial remains of at least 274 American troops in a Virginia landfill ... before halting the secretive practice three years ago, records show.

The landfill dumping was concealed from families who had authorized the military to dispose of the remains in a dignified and respectful manner, Air Force officials said. ...

The Air Force had maintained that it could not estimate how many troops might have had their remains sent to a landfill [claiming it would take too much time and effort]. ...

The landfill disposals were never formally authorized under military policies or regulations. They also were not disclosed to senior Pentagon officials who conducted a high-level review of cremation policies at the Dover mortuary in 2008 ...

The total number of incinerated fragments dumped in the landfill exceeded 2,700.

I'd call the Air Force officials little more than pieces of shit, but that would disrespect shit, which can be used as fertilizer to help living things grow. I assume that the conservatives who cannot abide any criticism of the US military support the landfill burials, right? What's the saying - if you don't stand behind the military, then go stand in front of them? 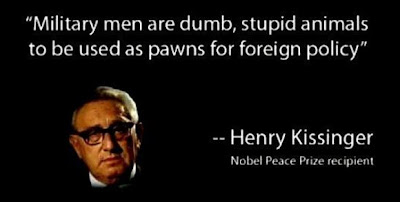 Back in April 2008, current Republican presidential candidate Newt Gingrich said the US should allow a terrorist attack to happen every so often to remind the American people how important the government's security measures are.

And the crowd laughs.

"We regret any additional grief to families that past practices may have caused," said Lt. Gen. Darrell D. Jones, an Air Force deputy chief of staff.

The U.S. military has, since 2001, cremated some of the remains of American service members killed in Iraq, Afghanistan and elsewhere at a Delaware facility that also cremates pets, a practice that ended yesterday when the Pentagon banned the arrangement.

The facility, located in an industrial park near Dover Air Force Base, has cremated about 200 service members, manager David A. Bose estimated last night. It uses separate crematories a few feet apart to cremate humans and animals ... Pentagon officials said they do not think that human remains and animal remains were ever commingled at the facility.

Just another example of how the US supports its troops.