They Wrote A Book About It, Said It Was Like Ancient Rome

Income inequality in the United States is higher than at any other time in modern history since the Great Depression.


[The U.S. is] now more unequal than countries like Ivory Coast and Pakistan. While those numbers are startling, a study from two historians suggests that American wealth inequality may actually be worse than it was in Ancient Rome - a society built on slave labor, a defined class structure, and centuries of warfare and conquest.

Historians Walter Schiedel and Steven Friesen state that the top 1% of Americans control 40% of the country's wealth. In Rome, when the empire was at its population zenith (around 150 C.E.), that number was approximately 16%.

Income inequality is not only a problem in the U.S. The distance between the ultra-rich and everyone else has increased in 17 of the 22 countries for which the Organisation of Economic Development and Cooperation has long-term data. Those 17 countries include the United Kingdom, Germany, Finland, Israel, Sweden, New Zealand, Mexico, Italy, Japan, Australia, and Canada.

Here are some pie charts and some facts:

According to the Congressional Budget Office, the top 1% saw their incomes rise by 275 percent between 1979 and 2007, while the incomes of the bottom 20% of earners grew by only 20 percent.

The total net worth of the Forbes 400 richest Americans is more than that of the bottom 60% of Americans.

The six heirs to the Walmart fortune had the same net worth in 2007 as the bottom 30% of Americans.

The richest 1% of Americans now earn almost 24 percent of the country's income. In 1976, that figure was 9 percent.

As noted above, the U.S.'s income equality is worse than in Pakistan, the Ivory Coast, and Ethiopia. It is roughly on par with Uganda. 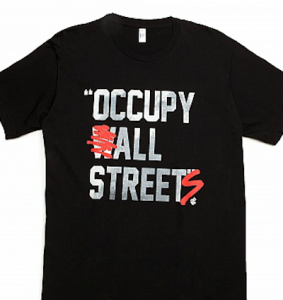 And while the situation in Canada is not nearly as dire, it is drifting in the wrong direction.

The Organization for Economic Co-operation and Development reports that the richest 1% of Canadians saw their share of total income increase from slightly more than 8 percent in 1980 to more than 13 percent in 2007. A big reason for that is the top marginal tax rate has dropped from 43% to 29% in that time period. 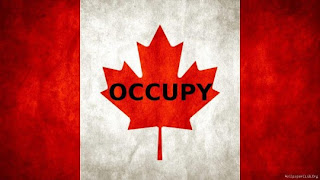 Many families who you and I would consider poor - $55,000 for a family of four, for example - are "too rich" to qualify for numerous U.S. tax credits and social programs. As the number of poor people rises, I await Barack Obama's (or his successor's) lowering of the poverty line, which would magically mean a much lower number of poor people. It worked for Ronald Reagan. Prosperity! Yay!

(Speaking of Reagan, during his two terms, he lowered the tax rate for the top 1% of income earners by 14.4% and raised the tax burden of the lowest 25% of workers by 16.1%. The U.S.'s current transformation into a third-world country began with Reagan and accelerated under Bill Clinton's administrations.)


Mayors in 29 cities say more than 1 in 4 people needing emergency food assistance did not receive it. Many middle-class Americans are dropping below the low-income threshold ... because of pay cuts, a forced reduction of work hours or a spouse losing a job. Housing and child-care costs are consuming up to half of a family's income.


The Occupy Wall Street movement has put America's staggering wealth gap front and center in the national debate. Between 1979 and 2007, average after-tax incomes for the top 1 percent rose by 281 percent while middle class wages stagnated. The top 1 percent controls roughly 40 percent of the nation's wealth. At the very top of the income scale, the 400 richest Americans have seen their share of income quadruple in the last 12 years, while their effective tax rates were halved.

In the 2010-11 school year, more than 31,000 homeless students attended school in Michigan - a 37% increase over the previous year. According to Jeff Seidel, an investigative reporter for the Detroit Free Press:


Overall, the number of homeless students in Michigan has jumped more than 300% in the last four years. Most experts say those numbers are low because many parents are embarrassed to admit they are homeless. And many school districts lack the resources to identify these kids, as required by federal law.

Advocates say there's also a disincentive to find homeless children. Once a district finds them, it has to pay to transport them to school and provide other services - a tough job for many cash-strapped districts.

In other Michigan news, Governor Rick Snyder on Monday signed into law bills lowering unemployment insurance and worker's compensation benefits - and regulations making it harder for workers to qualify for those ever-meager benefits. 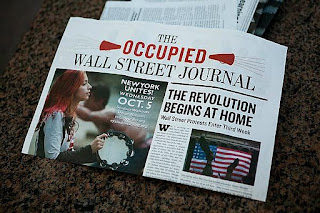 
Who gives a crap about some imbecile? Are you kidding me?

As the US circles the drain, its capacity for war and violence and its rush to stuff taxpayer money down the pants of weapons manufacturers in the name of fighting phantom enemies continues unbatted:

"In Montgomery County, Texas, the sheriff’s department owns a $300,000 pilotless surveillance drone, like those used to hunt down al Qaeda terrorists in the remote tribal regions of Pakistan and Afghanistan. In Augusta, Maine, with fewer than 20,000 people and where an officer hasn’t died from gunfire in the line of duty in more than 125 years, police bought eight $1,500 tactical vests. Police in Des Moines, Iowa, bought two $180,000 bomb-disarming robots, while an Arizona sheriff is now the proud owner of a surplus Army tank.

The flood of money opened to local police after 9/11, but slowed slightly in recent years. Still, the Department of Homeland Security awarded more than $2 billion in grants to local police in 2011, and President Obama’s 2009 American Recovery and Reinvestment Act contributed an additional half-billion dollars."

A Texas woman who for months was unable to qualify for food stamps pulled a gun in a state welfare office and staged a seven-hour standoff with police that ended with her shooting her two children before killing herself, officials said Tuesday. The children, a 10-year-old boy and a 12-year-old girl, remained in critical condition Tuesday.

Also: "Income dropped for California's lowest-income families by more than 21 percent from 2007 to 2010 while dropping by just 5 percent for the most affluent families."

Honestly, in a country packed with so many weapons and such desperation, it's a wonder this doesn't happen more often. And I'm sure it happens (in some form) much more frequently than we know.

The 'Augusta Maine' reference jumps out at me. Unlike Portland or Lewiston, it has not had a recent influx of immigrants; unlike Bangor, it does not have a large population of college students. So, it's a little hard to imagine the violent scenario the grant-writers are fantasizing.

What it does have is the state capital, and, as long as a jerk like Paul LePage is governor, the place may feel beleagured, as ordinary citizens descend on the place to protest the gutting of services for the poor and old, the removal of the labor mural, the state's refusal to bargain in good faith with the unions, and so on.

Whether any of that protesting requires cops dressed in SWAT regalia is arguable....

When the governor wanted to send a message to the small contingent of people in Occupy Augusta, he called out the Maine State Police in force, and there are some sweetly appalling photos of ordinary Mainers, both cop and occupiers, standing in front of the governor's mansion looking sheepish.

After a point I suppose law enforcement will want to play with its drones, tac vests, heavy firepower and will over-react to some situation so they can deploy the goodies and will then use their own over-reaction as justification for the original purchase of the equipment.

Joseph Wambaugh, somewhere in his oeuvre, has a very fine set-piece about a cop who responds to domestic disputes in a passive-seeming, back-pedaling, nonconfrontational way. It made a huge impression on me (and pointed the way to my methods of dealing with students)--it's an approach a hell of a lot more intelligent than going in with guns blazing.

But if your first thought is to unlimber your sidearm, I guess you better have a surplus tank as back-up.

Here's a true-crime story, dateline Augusta Maine, circa 1985: a lad at a local seminary, training to be a pastor, came up short on money and began a career as the
'gentleman bank robber,' invariably polite and reassuring, as befitted a future clergyman.

One day while the seminarian was robbing a bank in Augusta, a local off-duty cop tackled him to the floor. While the cop was putting on the cuffs, the robber kept shouting,
'Show me some ID, show me some ID!'

That remark has been immortalized in the Chutzpah Hall of Fame.