"The Basement Tapes Complete" To Be Released November 4 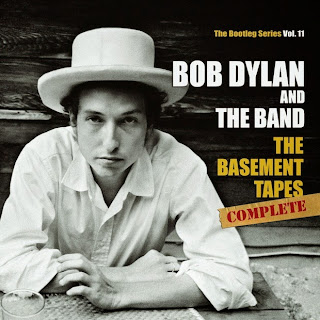 Next Tuesday, Columbia will release the 11th volume of its Bob Dylan Bootleg Series: The Basement Tapes Complete. Six CDs - 139 songs! - of music from Dylan and The Band at Big Pink in West Saugerties, New York, during the summer of 1967, presented in as close to chronological order as is known. (A two-CD set of 38 songs will also be available.)

The Basement Tapes, a double album of songs released in 1975, purported to be from those informal sessions, but many of the songs featured overdubs added years later, and there were eight songs recorded at a later date by The Band without Dylan.

There have been collections of these songs available as bootlegs for decades, most notably on the superb A Tree With Roots. However, this new 6-CD set includes thirty uncirculating tracks.

A number of songs have been posted online as pre-release teasers. Here they are:

Dress It Up, Better Have It All

Yea! Heavy And A Bottle Of Bread

I Shall Be Released

And, finally, Pono has 30-second samples of all the songs on the six discs.

For more on the Basement tapes, check out Greil Marcus's Invisible Republic (later retitled The Old, Weird America) and Sid Griffin's Million Dollar Bash: Bob Dylan, The Band, and The Basement Tapes. Griffin wrote the liner notes to the upcoming Columbia box.
Posted by allan at 6:44 AM

Articles in the Guardian and LA Times.