In my recent REM post at JoS, I picked "Voice of Harold" as one of my favourite songs by the band. It was recorded during the Reckoning sessions in December 1983. Michael Stipe reads the back of an old gospel album over the backing track of "7 Chinese Brothers". The song was released as the B-side to So. Central Rain and collected on Dead Letter Office, an odds and sods album released in 1987.

Here is the album - The Joy Of Knowing Jesus by The Revelaires -- front and back: 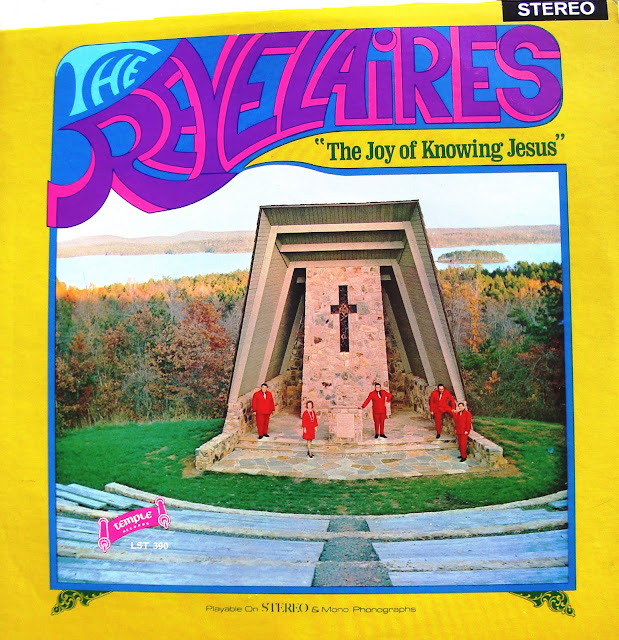 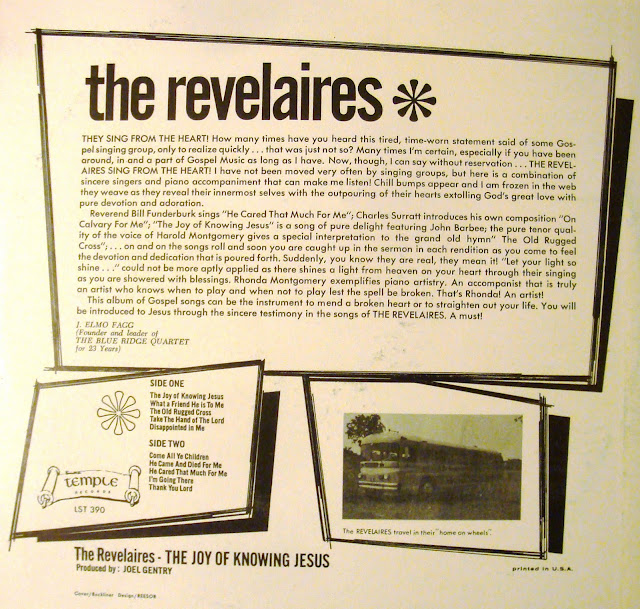 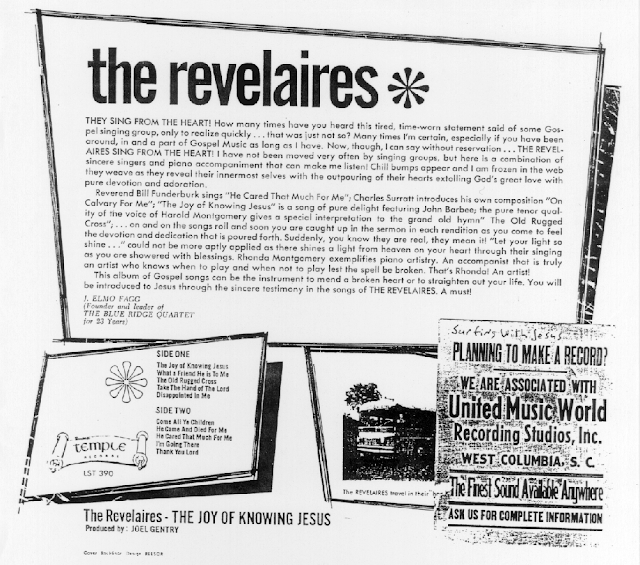 Reverend Bill Funderburk sings "He Cared That Much For Me";
Charles Surratt introduces his own composition
"On Calvary For Me"; "The Joy of Knowing Jesus"
Is a song of pure delight featuring John Barbee;
The pure tenor quality of the voice of Harold
Montgomery gives a special interpretation to the grand
Old hymn "The Old Rugged Cross";
Chill bumps appear and I am frozen in the web they weave
As they reveal their innermost selves with the outpouring of their hearts.
On and on the songs roll on and soon you are caught up
In the sermon in each rendition as you come to feel
The devotion and dedication that is poured forth.
Suddenly, you know they are real, they mean it!
"Let your light so shine" could not be more aptly a-
Pplied as there shines a light from heaven on your heart
Through their singing. As an artist, Rhonda Montgomery
Exemplifies piano artistry. That's Rhonda! An artist!
This album can be the instrument to mend a broken heart
Or to straighten out your life.
Through the sincere testimony in the songs of The Revelaires.
A must!
J. Elmo Fagg (Founder and leader of
The Blue Ridge Quartet
For 23 Years) on Temple Records, LST 390
Planning to make a record?
We are associated with United Music World
Recording Studios, Incorporated,
West Columbia, South Carolina. The finest sound available anywhere
"The Joy of Knowing Jesus" pro-
Duced by Joel Gentry
Cover/Backliner Design/Reesor
The Revelaires. A must.
The Revelaires.
A must. In their home.

Producer Don Dixon (why the song title is given as "Blues" and not "Brothers" is a mystery (even if this was an early title, it clearly was not the title on the day of the recording), but I'll keep it as is):


We were working on the vocal for "7 Chinese Blues," but Michael just wasn't into it. He was down in his stairwell. I hit the talk-back to let him know I was coming through to make an adjustment... This was just an excuse to take a look at him, see if I could loosen him up a little. While I was in the attic, I'd noticed a stack of old records that had been taken up there to die, local R&B and gospel stuff mostly. I grabbed the one off the top (a gospel record entitled The Joy of Knowing Jesus by the Revelaires) and as I passed Michael on the way to the Control Room, I tossed it down to him. I thought he might be amused. When I fired up the tape a few seconds later, Michael was singing, but not the lyrics to "7 Chinese Blues." He was singing the liner notes to the LP I'd tossed him. When Michael began to sing these liner notes, he was much louder than he'd been earlier and it took a few seconds for me to realise what was going on and adjust the levels. He made it all the way through the song, working in every word on the back of that album! I rewound the tape, we had a chuckle and proceeded to sing the beautiful one-take vocal of the real words that you hear on Reckoning. He seemed more confident after that day.

In 2007-08, Matthew Perpetua wrote a blog about each one of R.E.M.'s songs. VoH/7CB is here. Towards the end of his run, Stipe agreed to answer a ton of questions from readers.

Q: When I listen to very old live recordings of the band, I'm always surprised to hear songs like Pretty Persuasion, Radio Free Europe and 1,000,000 alongside the lesser songs that soon fell by the wayside. At the time, did you feel like there were two tiers of songs (quality-wise) in your sets? Also, why did you record Harborcoat with a second set of verses deep in the background?

Stipe: i’m not sure which lesser songs you mean but I can guess it means songs that werent recorded for an album. I don’t know what I thought at the time but I suspect the better songs got recorded for a reason and the lesser songs didn’t, because maybe they just weren’t that good, or sounded too much like something else. As for Harborcoat, which we played tonight btw, a lot of the songs had counter melodies or other sets of lyrics written, and one melody or lyric won out over the other. We still would sometimes layer the two just because it sounded good. Fall On Me does that too I think.

That link goes to a YouTube video of the Revivalaires, not the Revelaires.

Harold Montgomery was my dad. He passed away 10 years ago. Ronda Montgomery is my mom. Ask away! I've got two copies of the Revelaires that are new in the album cover.