One of Donald Trump's "elite strike force" of vote fraud lawyers who is (winkwink) not one of Donald Trump's "elite strike force" of vote fraud lawyers is filing two lawsuits in Georgia and Michigan.
In the Georgia document, Sidney Powell misspelled "district" twice in the document's first eight words. That's impressive.
Many news reports state both documents are full of typos and formatting errors.
I have worked for lawyers for nearly 30 years, from a sole practitioner to two of North America's largest firms. I have formatted and revised countless legal documents. The appearance of a court document can also serve as a statement about the pride its creators take in their work, for good or bad.
I have a good eye for catching typos and inconsistencies and I've corrected many typos or obvious grammatical mistakes over the years. I scrolled quickly through the Georgia document and dozens of inconsistencies and formatting mistakes jumped out at me. God knows what I'd find if I read the fucking thing. I had plenty of horrendous formatting fuckups from the Michigan document by page 15, so I stopped there.
Both documents show a sloppy and inattentive mindset. The odds are good that the people behind it have a casual and haphazard work ethic and a careless, indifferent focus on the law.
Georgia
Word processing programs have had spellchecks for decades, but you do have to click a button to have them run. Also note the two consecutive commas in the caption. (I would also move "Northern" to the second line, but having it where it is doesn't constitute an error, I suppose.) 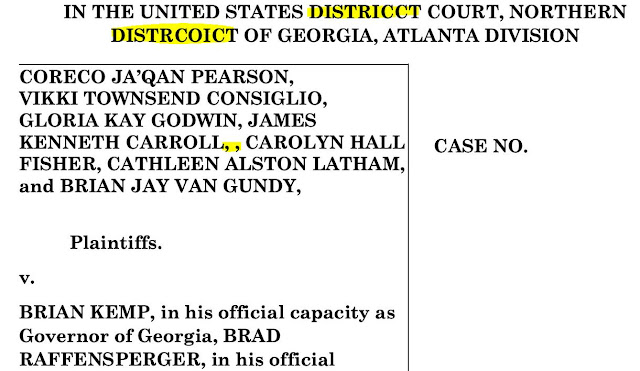 There is no closing quotation mark at the end of paragraph 34.

The Georgia document uses two different styles of quotation marks throughout the entire 104-page document: the curly "smart" quotes and the straight, regular quotes.
The paragraphs are left-justified, meaning the right margin is ragged and every line does not extend to the right-margin. All words and spaces will be proportional; there will not be the appearance of additional space between words, unless you put extra spaces between various words yourself for no good reason, as has been done in paragraph 44. 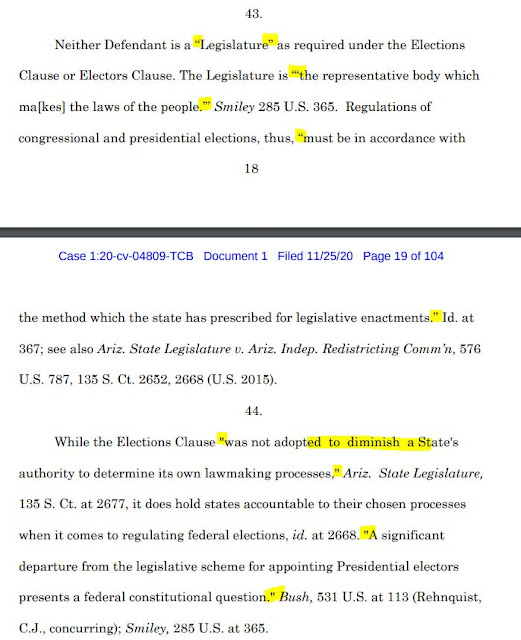 More issues with quotation marks. The sentence in paragraph 79 should end like this: . . . at table 'A'." 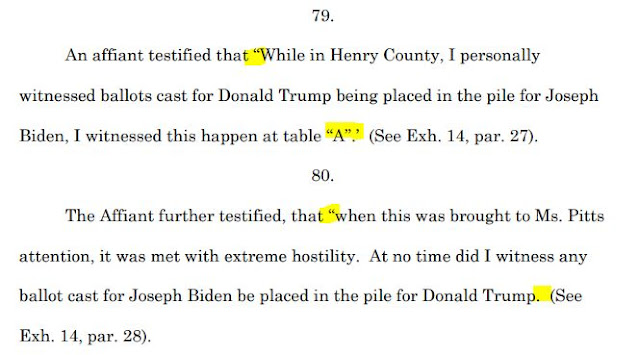 Paragraph 98 has some shitty writing. How about this:

In 2019, it was further reported that with the new Dominion Voting Machines being used in Georgia's current voting system, "there's no way to . . .

We have subparagraphs in the (a), (b), (c) format. For ease of reading, these subparagraphs should have a hanging indent so that the left-margin of text lines up under "Recounts" and "But" and "The". 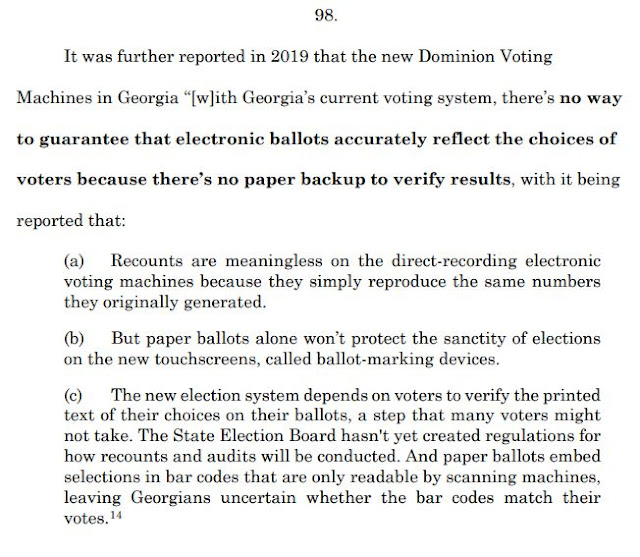 But these subparagraphs, used in the exact same way as above, are a., b., c., etc. Subparagraph c. is missing an opening quotation mark. And these are indented only 0.25 while the ones above are at 0.5. And page 48 includes one of many widows, a big no-no. And there should be a comma after "Berkeley". 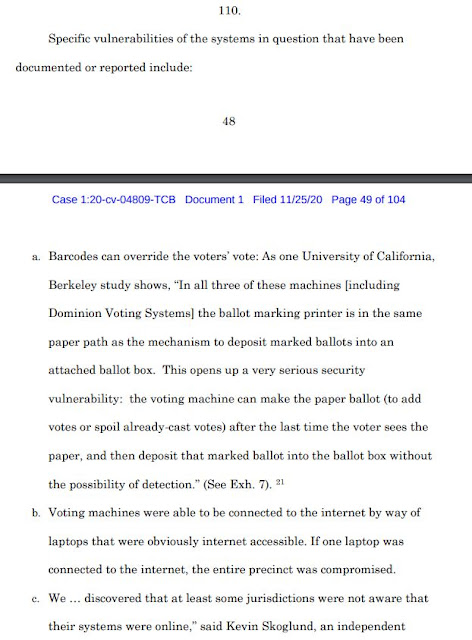 This subparagraph ends with two periods. 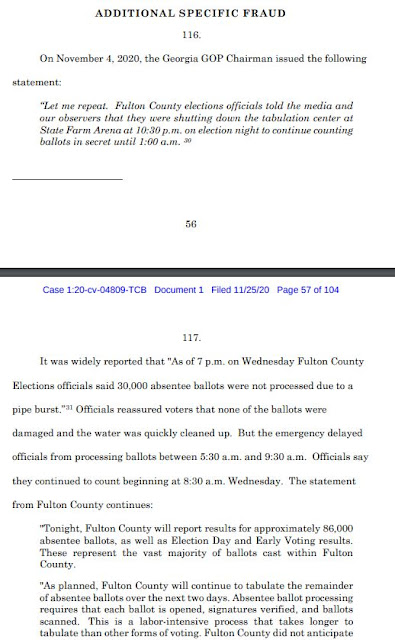 The Count II heading is begins at the very bottom of page 69 and continues on page 70. This widow is truly an embarrassment. 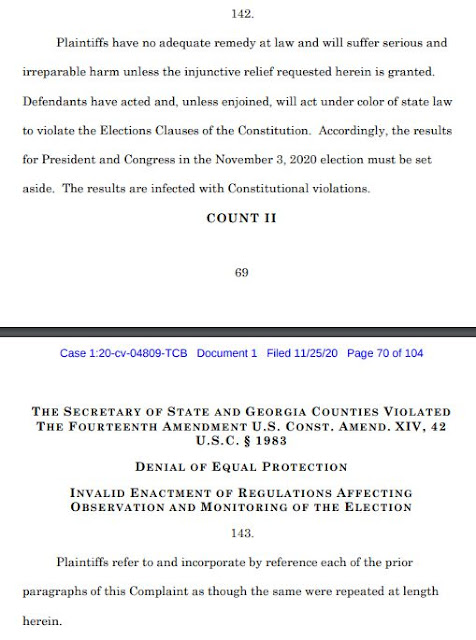 Another widow. The sentence should have been moved to the next page.
I also get bugged by minor things like Georgia being abbreviated and Texas being spelled out. 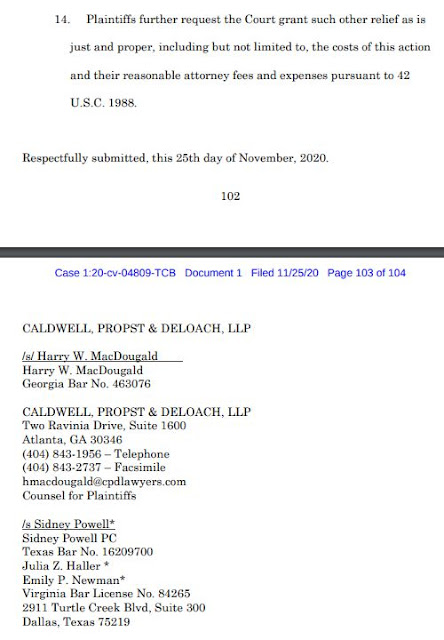 Michigan
Now this document is a piece of shit. Why is "District" such a difficult word to spell correctly? 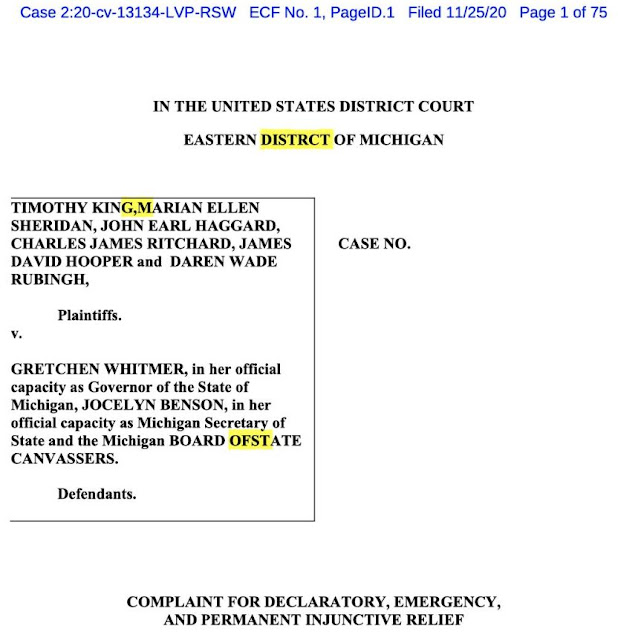 The big problem in this document is spacing, with entire sentences presented as one big word. I wondered for a few minutes if this could have happened when the document was uploaded, but I don't understand why it would happen in some places and not in others.
Anyway, many smaller spacing errors seem like actual typing mistakes or perhaps a PDF was scanned (I'm sure they are using the same arguments in multiple suits in multiple states) and the text was pasted in without making sure it was correct. Also some of the cites are missing the section symbol. The only time an ampersand should be used is if it is in the actual name of a company.
I stopped at page 15. The document is 75 pages. 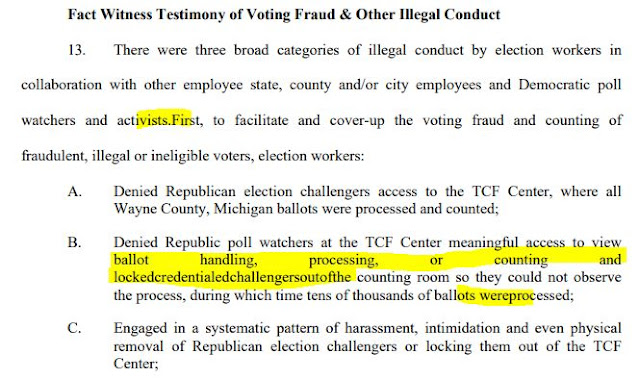 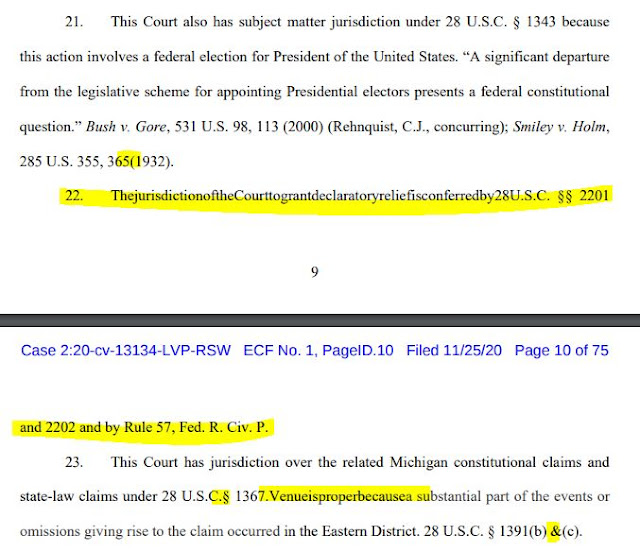 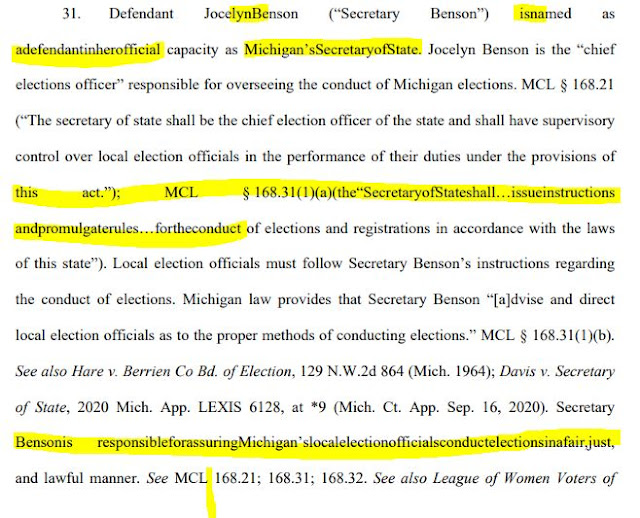 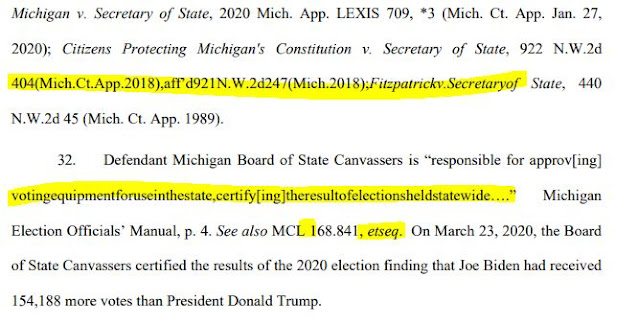 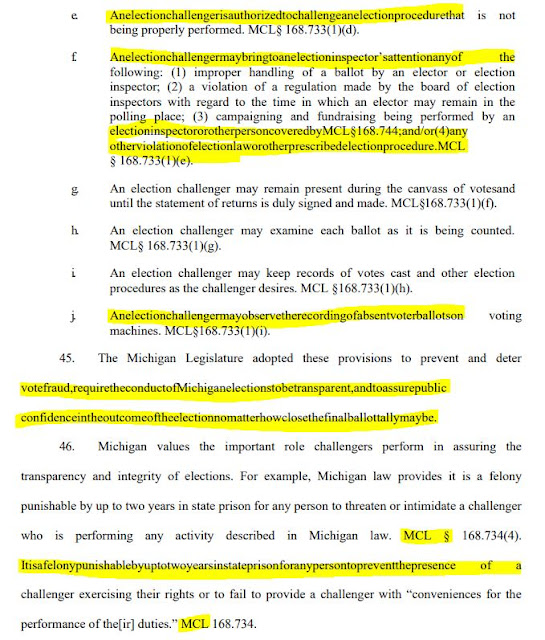 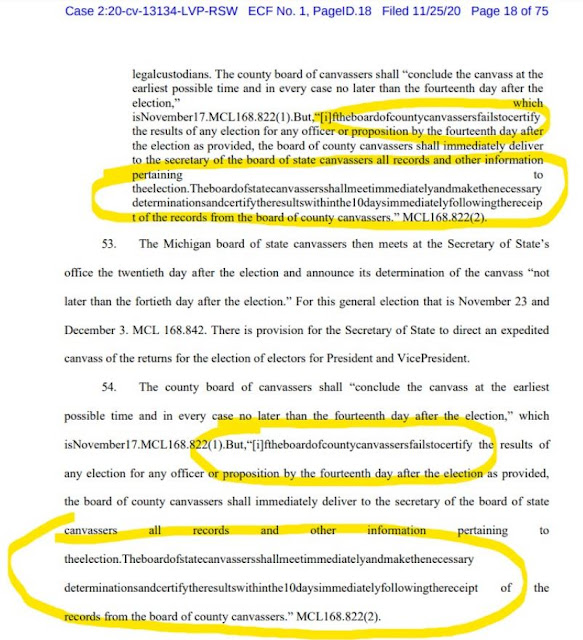 The Kraken are still struggling with spelling, and now also with spacing. pic.twitter.com/R9Nv8K5tbO

Started trying to proofread the Sidney Powell complaint and I didn’t get very far. I wouldn’t recommend filing this version in court, Sod. https://t.co/bUnKg6jMNe pic.twitter.com/PlR4xNIimO

So the fraud is so good there is no evidence of it?

Oh the irony! Their mistake was not making any mistakes! That’s what gave them away.

All three judges on the panel were appointed by Republican presidents. The opinion's author was appointed by @realDonaldTrump in 2017, and the concurring judges by President George W. Bush. https://t.co/3GHAuDjMGt

Milwaukee County concludes its recount of the presidential election -- one of two counties where Trump sought a recount in Wisconsin. The results: Biden's lead, currently at about 20,000 statewide, grew by 132 votes.

Looks like even the @GOP has stopped tweeting out anything about the Trump/Republican lawsuits.👀

Lawyers are not supposed to bring lawsuits that are that are frivolous, have no legal rationale, or are merely designed to cause a delay in the normal operation of law. https://t.co/hlCKviuDrI

Given the last few weeks events I would not have been surprised if the documents had been in German, Italian or Gibberish !

Who is paying you to proofread these legal documents?