Trump Is Realizing He Simply Can't File A Nuisance Suit Against The Election To Make It Go Away, No Competent Lawyer Will Represent Him, And He's Being Abandoned By Everyone Except His Idiotic Children & The MAGA-Idiots He Despises 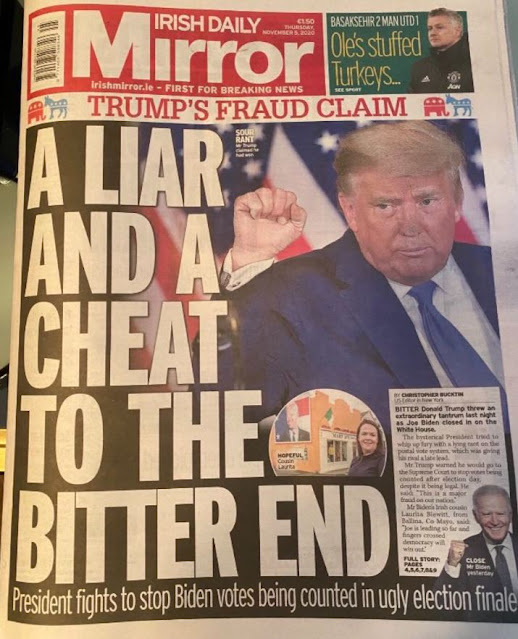 Donald Trump has admitted he does not to understand that as votes are counted, vote totals increase.
One of his tweets on Friday requested "an explanation as to how these numbers have been running up for the last two or three days".
How It Works:

Biden has 10 votes.
As the counting continues, there are 5 additional votes for Biden.
Biden has 15 votes.

There is strong evidence that Donald Trump does not understand this. (Millions of his supporters also remain iffy on this concept.) But anyone who denies science is most likely not very good at math.

Watch this outstanding summary of what's going in the U.S. election by BBC journalist Ros Atkins. Sometimes you need to see "us" through another's eyes to understand where we are. It's only 45 seconds. https://t.co/X89pBBFA5d pic.twitter.com/lok3Z4jly9

Joe Biden should not wrongfully claim the office of the President. I could make that claim also. Legal proceedings are just now beginning!

I had such a big lead in all of these states late into election night, only to see the leads miraculously disappear as the days went by. Perhaps these leads will return as our legal proceedings move forward!

“We need an explanation as to how these numbers have been running up for the last two or three days.” Matthew Whitaker. @EveningEdit

The explanation is that votes are being counted. pic.twitter.com/yWC1vmXf8J

Maybe the military didn’t like it when you called dead soldiers “losers” https://t.co/O2JEsxkbNW

Trump is about to be, or is, completely unhinged. His psyche is going to fracture; he will start destroying absolutely everyone and everything in his path for the next 2 months. I have almost zero confidence that anyone will intervene at some point...😞

"On Thursday night, advisers warned Mr. Trump to prepare to lose, according to a person familiar with the conversation. He expressed little interest in that advice." https://t.co/wlzNmALLF3

Kaitlan Collins: "We're being told tonight by sources that the president is raising questions about the effective of [his legal] team ... basically suggesting he doesn't think they're up for the task. And he's even told one person he wants them to find him better attorneys." pic.twitter.com/ggwJP6ax33

No good lawyers would work for him. The case this shit. it would ruin their reputation and possibly cause loss of good paying clients. And of course Trump is never going to pay them.

Yeah but that’s not the problem. The best lawyers can’t help him bc his cases are frivolous & have no merit. There’s only so much the best lawyer can do. This isn’t like a nuisance suit to force the other side to take less $ or go away. Biden & the 70+ mill aren’t going anywhere.

But don’t worry, MAGA Twitter is on the case. 🤣

“He wants to lose. He’s out of money. He worries about being arrested. He worried about being assassinated. It hasn’t been a great experience for him ... the actual day-to-day business of being president? It’s been pretty unpleasant for him.” https://t.co/nC9yFdSSoM

Self Cooking Dump is finally Dumped ......