As Joe Biden Is Declared Winner Of 2020 Election, Donald Trump Is Busy Golfing 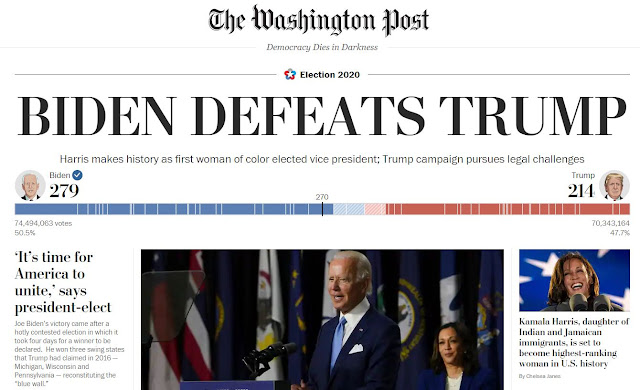 Joseph Robinette Biden Jr. was elected the nation's 46th president Saturday in a repudiation of President Trump powered by legions of women and minority voters who rejected his handling of the coronavirus pandemic and his divisive, bullying conduct in office.

Biden's victory, the culmination of four years of struggle for Democrats, came after a hotly contested election in which it took four days for a winner to be declared after the former vice president was projected to win a series of battleground states, the latest of which was the state where he was born, Pennsylvania.

Voters also made history in electing as vice president Kamala Devi Harris, 56, a senator from California and daughter of Jamaican and Indian immigrants who will become the country's first woman, first Black person and first Asian American to hold the No. 2 job.

In a statement released Saturday, Biden said . . . he and Harris looked forward to working on the nation’s many challenges. . . . Harris, in a tweet sent after the result was announced, said the election was about more than the Democratic team.

"It's about the soul of America and our willingness to fight for it," she said. "We have a lot of work ahead of us. Let's get started." . . .

In a statement shortly after the race was called, Trump defiantly . . . pledged to challenge the result in the courts.

"Beginning Monday, our campaign will start prosecuting our case in court to ensure election laws are fully upheld and the rightful winner is seated," Trump said. . . .

Earlier Saturday, Trump falsely claimed to have won the election "by a lot," despite the reality that he was losing the popular vote by more than 4 million ballots and was at risk of losing in the electoral college by the same 306-232 result that propelled him to the presidency in 2016. 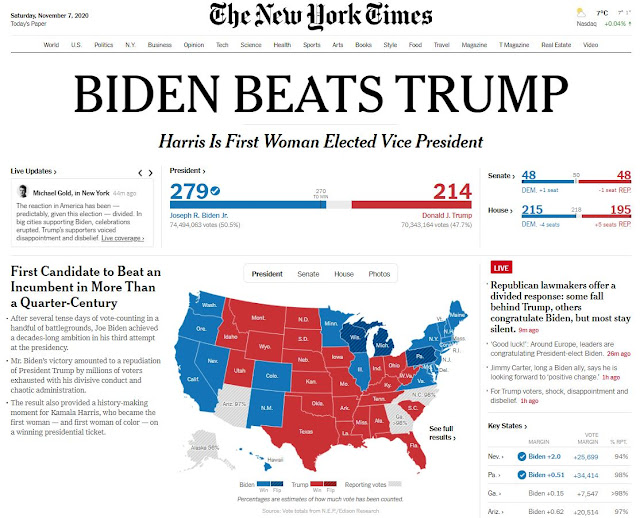 Joseph Robinette Biden Jr. was elected the 46th president of the United States on Saturday, promising to restore political normalcy and a spirit of national unity to confront raging health and economic crises, and making Donald J. Trump a one-term president after four years of tumult in the White House.

Mr. Biden's victory amounted to a repudiation of Mr. Trump by millions of voters exhausted with his divisive conduct and chaotic administration, and was delivered by an unlikely alliance of women, people of color, old and young voters and a sliver of disaffected Republicans. Mr. Trump is only the third elected president since World War II to lose re-election, and the first in more than a quarter-century.

The result also provided a history-making moment for Mr. Biden's running mate, Senator Kamala Harris of California, who will become the first woman to serve as vice president.

With his triumph, Mr. Biden, who turns 78 later this month, fulfilled his decades-long ambition in his third bid for the White House, becoming the oldest person elected president. . . .

He offered a mainstream Democratic agenda, yet it was less his policy platform than his biography to which many voters gravitated. Seeking the nation's highest office a half-century after his first campaign, Mr. Biden — a candidate in the late autumn of his career — presented his life of setback and recovery to voters as a parable for a wounded country.

In a brief statement issued after Pennsylvania delivered the crucial electoral votes for victory, Mr. Biden called for healing and unity. "With the campaign over, it's time to put the anger and the harsh rhetoric behind us and come together as a nation," he said. "It's time for America to unite. And to heal." . . . Mr. Biden planned to address the nation Saturday night.

In his own statement, Mr. Trump insisted "this election is far from over" and vowed that his campaign would "start prosecuting our case in court" but offered no details. 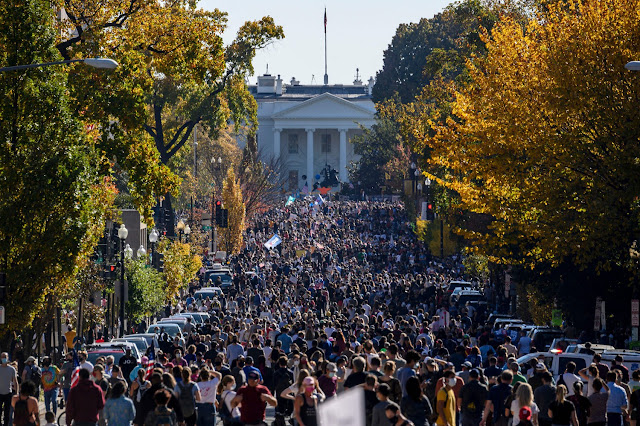 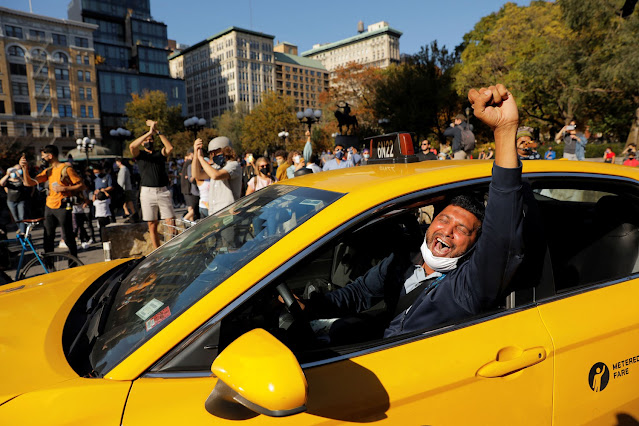 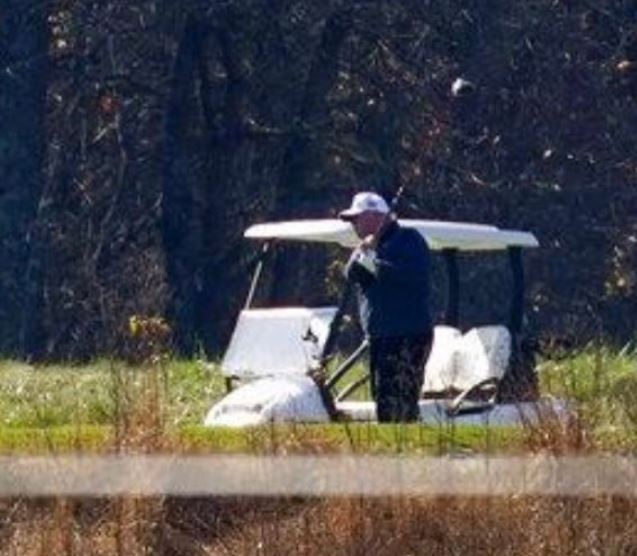 CNN called it first, at 11:24 a.m. on Saturday, quickly followed by NBC, CBS, ABC and The Associated Press. Fox News waited until 11:40 a.m.
The projection . . . came after days of slow-burning suspense on the cable news networks and broadcast channels. As millions of anxious viewers watched, the anchors and pundits filled hours of airtime by tracking the vote counts in battleground states. All the while, President Trump fumed and filed legal challenges in the background of the incremental ballot-count developments in Nevada, Georgia, Pennsylvania and Arizona. . . .
"The Fox News decision desk can now project that former Vice President Joe Biden will win Pennsylvania and Nevada, putting him over the 270 electoral votes he needs to become the 46th president of the United States," the Fox News anchor Bret Baier told viewers at 11:40 a.m. . . .
"After four long tense days, we've reached a historic moment in this election," Wolf Blitzer, of CNN, announced. "We can now project the winner of the presidential race: CNN projects Joseph R. Biden is elected the 46th president of the United States, winning the White House and denying President Trump a second term. We're able to make this projection because CNN projects Biden wins Pennsylvania." . . .
Moments afterward, the CNN correspondent Abby Phillip noted, referring to Mr. Biden, that it was "a white old man who did it." . . .
The anchor Anderson Cooper asked the pundit Van Jones for his reaction. Mr. Jones, tearing up behind his eyeglasses, took a moment before saying, "Well, it's easier to be a parent this morning. It's easier to be a dad. It's easier to tell your kids that character matters."
On Fox News, Mr. Baier said, speaking of Mr. Trump after the news had been reported, "We have to remember that he is the president until Jan. 20. And there are interesting things that could or could not happen during that time while these legal challenges are going on."
The anchor Chris Wallace . . . seemed unimpressed with the president's talk of a fraudulent election and his legal challenges. "I think it's going to become increasingly untenable," he said. . . .
Shortly after 12:30 p.m., Fox News broadcast scenes of revelers in the streets of Lansing, Mich., Washington, D.C., and New York City, as well as a group of Trump supporters in Harrisburg, Pa., who were waving Trump flags and carrying signs that said, "Stop the Steal," a reference to the president's unfounded claims that the election was fraudulent.

AP got the shot. Trump on the golf course while Biden is announced as new President pic.twitter.com/0ddKdNl7PN

The crowd outside the White House celebrating Joe Biden’s projected victory is blaring YMCA — the song President Trump closed out his latest rallies with. pic.twitter.com/UkrsBq8l5M

“WHAT IS THE WORLD COMING TO?” https://t.co/yICazipLih

In Ballina, Ireland, President-elect Joe Biden's distant cousins were the first to pop the champagne on Saturday as a few hundred people gathered in the town square to watch the moment it was announced that he'd defeated President Trump. https://t.co/Jf143eaNhJ

Notice its always up to Democrats to find a way and never up to the other side.

Kamala Harris "can't even pronounce her own name," says Tucker Carlson, an authority on the matter.

Donna Brazile is on Fox crying over the election of the first Black, woman VP.

The first question from the blond Fox anchor is: how can Biden reach across the aisle to people who aren't feeling that way.

Conservative commentator @TomiLahren – who is having somewhat of a meltdown right now – called Hillary supporters in 2016 "snowflakes," and "sore losers" having "a tantrum." pic.twitter.com/irmCD4pvab

I WON THIS ELECTION, BY A LOT! 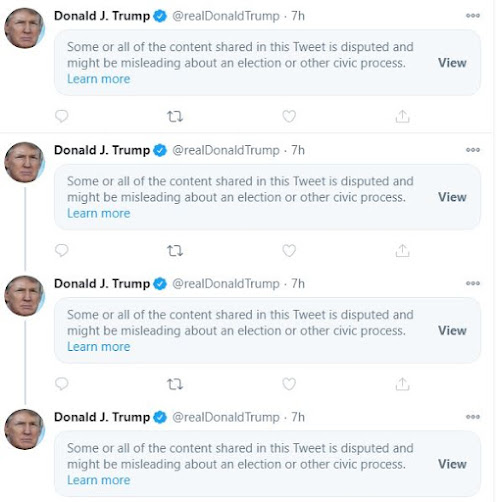 No , Mr Dump & Mr Giuliani you cannot sue the State of Pennsylvania as we have already told you 463 times

NEVER in the field of Legal History

Has SO much been owed