Trump Has Checked Out, Tweeting His Delusions As His Legal Challenges Quickly Fizzle; He Almost Said "Biden Administration" Today In A Short Public Statement; The US Set A Single-Day Record Of 90,000 New COVID Cases Two Weeks Ago; Today, There Were 181,000+ (With Holiday Travel About To Begin)

Donald Trump has completely checked out, abandoning even the pretense of being president. He knows he'll be out on his ass on January 20, so he's decided not to do another goddamn thing except hide in his room, watch Fox and OAN, and tweet his many delusions.

In the past two days, Trump has lost several court challenges and two prominent law firms have bailed from representing the campaign's legal efforts.

Trump's case in Arizona has been especially embarrassing. First, his lawyers admitted that even if the judge ruled in their favor, it would have no effect on Biden winning the state.

Second, attorney Kory Langhofer conceded today he was "not alleging fraud" or claiming "that anyone is stealing the election" — quite a difference from Trump's tweet (also today): "This Election was Rigged" — only that there was a "limited number of cases" involving "good-faith errors".

Third, Trump's witnesses, far from citing actual fraud, stated they didn't know if any alleged irregularities existed. When asked by the lawyer for the Arizona Democratic Party, each one admitted they had no idea:

"Do you have any basis to believe your vote wasn't counted?" Arellano asked voter Mia Barcello.

"Uh, I'm not sure," Barcello replied with a laugh.

When pressed about it further, Barcello replied: "No."

Ms. Barcello had plenty of company, with another witness responding "I couldn't say" to the same inquiry, and another replying "That's correct" when asked if he did not know one way or another whether his vote was counted . . .

Radical pro-Trump extremists are so desperate to believe fraud exists, they are being easily duped by pranksters on the internet. A video appearing to show an election official destroying a Trump ballot (a single ballot?) was viewed hundreds of thousands of times on Instagram, Twitter, and YouTube, and shared by several prominent conservatives — before the video's creator revealed on Facebook that it was a joke.

The cognitive dissonance required to believe this nonsense is mind-boggling. While Trump is claiming that fraud is rampant across the nation, the Texas governor has offered a $1 million reward for anyone coming forward with any evidence of fraud. (So maybe it ain't that widespread . . .)

Trump's legal efforts are being quickly tossed out of court because they have no merit, with a judge in Michigan ruling that the supposed claims of fraud were "not credible". In other cases, Trump's lawyers, when asked directly, have admitted that Republican poll watchers were able to view the various certifications, exposing Trump's claims as complete lies.

Trump's campaign claimed four dead people voted in Georgia. But at least two of them were easily found, still alive:

President Trump's campaign accused four Georgia voters of fraud. Said they voted 'dead' in the presidential election. We tracked two of them down, alive & well. We simply knocked on a door and 96-year-old Mrs. James Blalock answered. @11AliveNews https://t.co/n9dLA70jJB pic.twitter.com/10cbPJTXB0

Trump is 1-for-15 in court (and the one has very little effect on anything), which is also pretty much what he did on the baseball field.

It's not clear why the law firms have sought to withdraw from the cases, nor should we expect them to elaborate, given that such firms will never acknowledge publicly that they didn't believe in the claims of their clients or submitted to public pressure. But the withdrawals are difficult to separate from how the cases have been going — especially given the pressure that has been brought to bear in light of Trump's baseless claims. They also suggest it will be difficult to retain top-tier lawyers to continue to push Trump's case . . .

Trump emerged from hiding today, making a short, low-energy statement, unable to do anything different from his campaign rallies. He got his ass kissed by various toadies and played the same old tired hits (testing causes cases, etc.) He took no questions.
Is this as close to a concession speech as we'll get?

Trump seems to be on the cusp of saying "the Biden administration," but catches himself and says "time will tell" pic.twitter.com/6QaZV9TFOq

Trump’s near-acknowledgement a few minutes ago: “I will not go - this administration will not be going to a lockdown. Hopefully the - the uh - whatever happens in the future, who knows which administration it will be, I guess time will tell...”

omg somebody wrote biden administration and he prolly crossed it out

Trump is now a lame duck president but he still hasn't figured out that coronavirus testing doesn't cause cases pic.twitter.com/lPTVmBDuHv

Trump better bask in these Dear Leader moments while he can pic.twitter.com/CiWWeKzEjc

"Thank you, Mr. President, for providing the leadership that's gotten us where we are today," says Alex Azar, before going on to praise Trump's "bold vision" pic.twitter.com/z67Fv1X0Zf

There's something extra bizarre about Pence, Azar, and company kissing up to Trump fresh off his rejection by US voters pic.twitter.com/FkgdTRVAGL

Trump ends the event and walks away without taking questions pic.twitter.com/fb9D3KHcyV

Trump is still tweeting out videos from his campaign account as if the presidential campaign isn't over https://t.co/mH53d9Ve98

The Snowflake-In-Chief had chatted with Geraldo Rivera in the morning.

Leaving chin high in a week or so-when your court fights no longer present a realistic long shot chance to overturn election-you remain head of GOP, architect of #SCOTUS, the new populism, continued hope of the conservative movement & if you so desire, candidate in 2024. https://t.co/O44qIchNLM

Just had heartfelt phone call w friend @realDonaldTrump who said he's a "realist" who'll do the"right thing" But he wants to see "what states do in terms of certifiction (etc)" He sounded committed to fighting for every vote & if he loses, talking more about all he's accomplished

He seemed like a heavyweight champion who is behind in points leading into the final round, but determined to fight on, knowing all the refs have scored the fight for the other guy. Still, he's going to answer the final bell, looking for the knockout he knows is a longshot. https://t.co/vPBoL3M1eP

It's more like Trump is pointing America to a vault he says is filled with evidence of fraud, but then you open the vault and we see that it's empty.

A record 81,757 new cases was reported on October 28. Today, just over two weeks later, the record is over 181,000. At least 25 states reported that their seven-day average of new cases was up 30% from the previous day. Cases are increasing in all 50 states, with at least 10 states recording all-time highs. In midwest states like Illinois, Iowa, Kansas, and Ohio, hospitals are reaching capacity and will soon force doctors to triage care, having to ignore some patients (who may die) while treating others. 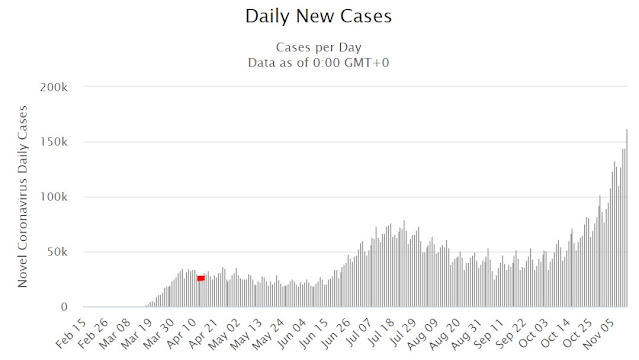 The red dot is meant to mark April 15, the day on which Trump confidently announced the worst was over. The US had "passed the peak of new cases".

The Trump White House continues to be a virus hotspot, as more than 130 Secret Service officers (roughly 10% of the agency) are now under orders to isolate or quarantine, according to the Washington Post. Also, eight staffers at the Republican National Committee have the virus. If Trump can't be bothered to keep the people who work around him safe, what makes anyone think he gives a shit about the rest of the country?

It's not the first time the Secret Service has been hit hard by the virus. Over the summer, dozens of agents fell ill or were forced to quarantine after Trump's not-sold-out rally in Tulsa and Mike Pence's trip to Arizona. Of course, Trump's insistence on holding rallies simply to boost his ego and his extreme reluctance (or outright refusal) to alter his routine puts numerous agents at high risk. Nothing will ever change his childish insistence on getting his own way, and his inevitable tantrum when he cannot.

Trump's only public statements in the last week have been via Twitter, yelling in ALL CAPS about fraud that election officials from both parties have repeatedly said does not exist in any way, shape, or form. Trump has also demanded to be crowned the winner of states he decisively lost.

Glenn Kessler of the Washington Post notes that many of Trump's tweets have been flagged by Twitter as "misleading":

The tweetstorm is an effort to provide the illusion to his supporters that he still has a chance to win reelection as his team pursues lawsuits falsely claiming election fraud in a variety of states and he refuses to concede the election.

.@Acosta: "President Trump is pretending he still has a chance to still win the 2020 election, but that's not true. Just a short while ago in the Rose Garden the president took no questions and appeared to come out in front of the cameras to sooth his damaged ego." pic.twitter.com/UnqlSN0hMe

McEnany: “I think the president will attend his own inauguration.” pic.twitter.com/uHTDneIiXx