It began, as all good 2020 capers do, with a tweet from the president of the United States. It ended with his personal lawyer in the parking lot of a landscaping company, struggling to be heard over a man in his underpants shouting about George Soros.
They say a star burns brightest just before it dies, and this was the Trump presidency in all its flaming glory.
For five straight days, the world had waited for news, any news, from Pennsylvania, which for all of that time had been expected to imminently decide the winner of a bitter election. . . .
"Lawyers Press Conference at Four Seasons, Philadelphia. 11:00 A.M," [Trump] wrote to his 88 million followers on Saturday morning. . . .
I sprang into action immediately, gathered my things, and was heading out of the door towards the Four Seasons Hotel in downtown Philadelphia when the next tweet came.
"Big press conference today in Philadelphia at Four Seasons Total Landscaping — 11:30am!"
Some mistake, I thought. A presidential typo? We'd seen worse over the last four years. . . .
I did a quick Google search. There was indeed a place called Four Seasons Total Landscaping in Philadelphia, but it was a small business in a drab industrial area on the edge of town. I struggled to think of any reason why the president's lawyers would hold their press conference here, at this establishment, with its 3.1 star rating on Google reviews.
I decided to call the Four Seasons Hotel, from whom I was sure I would get confirmation that this press conference was indeed being held on their premises — perhaps in a grand ballroom or conference room.
A woman answered — she was primed: I was obviously not the first person to call.
"Yes there has been some confusion about this," she said politely. "The press conference is not taking place here, it is taking place at Four Seasons Total Landscaping."
It's hard to explain the confusion I experienced as I sped along the highway out of downtown Philadelphia towards Four Seasons Total Landscaping. Was this one last act of revenge by the president against the lying fake news media while he still had our enrapt attention? Was it a ruse to get all the journalists out of town for when the results were announced?
Truth be told, it didn't matter. However this turned out, Four Seasons Total Landscaping was the story now.
I arrived to see a media scrum around a chain link fence that led into the parking lot of Four Seasons Total Landscaping. The building itself was one-storey, with a neat lawn and a row of hedges at the front. It was in that part of town that every town has, where businesses which have no right being grouped together nonetheless gather due to one reason or another — usually the cheap rent. Across the street from Four Seasons Total Landscaping was a crematorium. Next door to it was an adult book store with a bright yellow sign that displayed its offerings: DVDs and lotions, novelty gifts, viewing booths. It was called Fantasy Island. In retrospect, it was an omen of what was to come. . . . 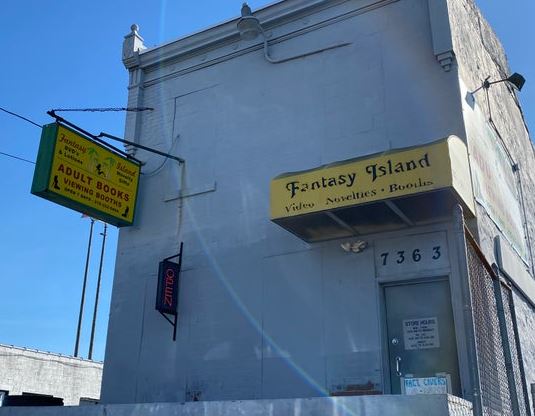 The day after the event, a cryptic Facebook post by the owners of Four Seasons Total Landscaping revealed little about how this all came to be.

"Four Seasons Total Landscaping is a family-owned small business run by life long Philadelphians. We were honored to be asked to host a press conference at our facility. We thank all of those that have shown support for our business and while we understand the negative comments, it saddens us that we have received such harsh judgement. Our team at Four Seasons would have proudly hosted any presidential candidate's campaign at our business. We strongly believe in America and in democracy" they said, before adding that they would soon be selling t-shirts on their website. . . .

In the Four Seasons Total Landscaping parking lot the cameras were assembled, the sound levels checked, the pens were poised and the gates were closed. The world's press waited for the evidence that would blow this big scam wide open. The sun shone brightly.
Then, out of nowhere, a journalist with a European accent announced the news: "CNN called the presidency for Biden!"
The assembled journalists were paralysed for a moment. Phones started to ring and calls were made. Some were given instructions to leave and started to do so. . . .
Just a few minutes later Rudy Giuliani appeared. This was the second press conference Giuliani had called in Philadelphia in a matter of days, both to make unsubstantiated claims about voter fraud. The first took place at an airport hangar. . . .
"I'm here to describe to you the first part of a situation that is very troubling," he began. He went on to claim that dead people were still voting in Philadelphia. "Joe Frazier is still voting here. Also Will Smith's father voted here twice since he died." . . .
Amid all the drama of the last 30 minutes, it appeared no one had told him that Joe Biden had been projected the winner of the election. A member of the press asked him how these lawsuits would overturn the call for the former vice president.
"Who was it called by?"
"All of them," came the response.
Giuliani took a moment before erupting in mock incredulity: "All the networks? Wow! All the networks!" He raised out his arms and looked to the sky, for a moment looking and sounding like Larry David doing a bit. But the wind had been sucked out of him. The smile had gone.
I walked out onto the street, where more Biden supporters had gathered across the road. A Trump supporter in his underwear and a Biden mask pulled up over his head [was yelling about George Soros]. ... Next to him, a man wearing an American flag suit and hat, and a full Donald Trump mask, stood silently and still. Even the mask he wore seemed to wear a dejected expression. . . .
The owner of the Fantasy Island adult book store had come out onto his porch to watch the circus. He stood and stared in disbelief until a customer jolted him awake again.
"Are you open?"
"Yes," he said, before following him inside.
It felt like an ending.

yesterday's fucking clown show will never stop being funny to me. on my deathbed, I'm going to be giggling and mumbling "Four Seasons Total Landscaping"

I knew we’d be happy but I didn’t realize we’d be spontaneous dance parties in the street happy. What a moment pic.twitter.com/8NsGheybEU

Some news — Jared Kushner has approached President Trump about conceding the election, per two sources.

Richard Engel on MSNBC...….Countries around the world are reacting as if America has overthrown a dictator

Newsmax reported this evening Fox News host Judge Jeanine Pirro’s show was pulled this weekend from the lineup ”because she made a very staunch defense of President Trump and wanted to expose the vote fraud that took place in the election.” https://t.co/qks9qm4yJ4

Written like a man who’s been in his basement for a year. https://t.co/bnP5pwprDj

Speaking of hiding in basements... pic.twitter.com/P3uvjwrotU

You have zero understanding of the mood of 70 million Americans who have been unfairly attacked relentlessly for the past four years as awful ppl just for supporting their president.

No. Half of the country has been demonized as awful for four years just for supporting their president who was falsely accused of Russian collaboration, wrongly impeached & attacked relentlessly by the L & a dishonest media. And now it’s “let’s heal!” “Unity!” Good luck.

It's sad that SOME women can't leave their (verbal) abusers. #MegynKelly pic.twitter.com/spmC1Tmyyq

South Dakota Gov. Kristi Noem still thinks Trump might've had the election stolen from him, though she can't cite any credible evidence of fraud beyond unconfirmed anecdotes pic.twitter.com/GElyoF1oyz

Rudy Giuliani says it'd be wrong for Trump to concede because the election might've been stolen (but we'll have to wait to see the evidence!) pic.twitter.com/XwSUyNsdbK

Since when does the Lamestream Media call who our next president will be? We have all learned a lot in the last two weeks!

Trump on October 27: "It would be very, very proper and very nice if a winner were declared on November 3."

Who did he think would make that declaration? https://t.co/nCn9PArk7T

Lol why cause he hasn’t given enough people covid? https://t.co/cwTZxiBiNC

Uhh, the Trump campaign plastered its headquarters with a fake newspaper front page that never existed, then its communications director tweeted out the image. (H/t to @KFILE) pic.twitter.com/1OmhOCEPbh

Trump and his supporters have alleged that campaign observers were blocked from ballot-counting rooms.

This is a blatant lie. We absolutely did discuss the pandemic when looking at the celebratory crowds. Receipt: pic.twitter.com/5EwyaVxane

No one: wait for trump to concede before you

They are trying to talk to him to leave quietly and politely. https://t.co/euGHHxf7Ch

Allow me to make this observation :

This could become a potential "Woodstock" of American Press Conferences

As Jeff Tiedrich said, this is surely 1 of THE most unforgettable tales of the Dump Administration

Quite Simply, an All Time Classic !

The Four Seasons press ahem conference is surely the greatest ever gift that keeps on giving. I can't stop laughing.

Written like a man who’s been in his basement for a year.

She's not wrong. No one is uniting and healing.