November 23, 2020: Joe Biden wins the election easily. His transition into taking office as the 46th president of the United States begins in earnest today.
November 24, 2020: Dow Jones hits 30,000 for the first time in history.

that Trump tried to take credit for the record-breaking mark by holding a one-minute press event to brag and possibly set a record of his own for the most nonsensical statements uttered in a minute.

“Well, that was weird as shit” https://t.co/2y0tdnlFsz

Normal stuff, just the President endorsing an insane proposal to conduct another election to replace the one he lost pic.twitter.com/hOn8vLnkak

There’s something bizarre about Trump trying to sell himself to voters when he was just rejected by them https://t.co/TuRi60IjWY

I’m not sure featuring the “shitter’s full” guy as part of a last-ditch effort to overturn the election will work out well for Trump pic.twitter.com/B6FPRgs08A

TRUMP: I will never concede https://t.co/TI1WweT5pY

I've got a truck if you need help. #TrumpConcede pic.twitter.com/DM64PsG2R5

Trump giving new meaning to the phrase "press conference" as he again takes no questions from the press. Trump has not taken a single question from a single reporter, for the past 17 days.

Mike flynn is a convicted felon. He confessed. He was on Putin’s payroll. Flynn sold out America and the judge all but called him a traitor.

This is who trump is thinking about as over 1,000 Americans are dying a day. https://t.co/AyIt557d2d

Me: "Do you feel embarrassed to be running nonsense like [Diamond & Silk] on your network & calling it news?"
Chris Ruddy, Newsmax CEO: "We're not saying that is accurate."
Me: "You're not saying your own shows are accurate?"

It will, again, be an enormous failure if, after Trump, reporters covering nominations and appointments revert to pretending to believe Republicans when they pretend to have principled views about who should be allowed to staff the government. pic.twitter.com/LKpZ3ILYIR

Does the world give a shit? Poll results... pic.twitter.com/pK7w9t06K8

This is a very weird comparison coming from a member of the US Congress https://t.co/FMkAKaWLWV

But also totally apt. Teruo Nakamura didn’t intentionally keep fighting, he was so cut off from reality that he didn’t realize that the war was lost. And he dismissed all evidence otherwise as enemy propaganda. Sounds exactly like Paul Gosar. pic.twitter.com/HKlb7qEMCy

A lot of them are still fighting for the confederacy.

Someone should remind him that Japanese soldiers fighting for 30 years after WWII ended didn't change the outcome. They still lost.

"Hey, you know those fanatical Japanese soldiers who wasted their lives hiding in the jungle for decades after everyone else moved on after World War II? We're just like them."

Good luck with that.

It’s easy to get numb to the fact that we’ve also had a president who’s rallied, laughed, partied, & trolled his way thru it, & his party & administration have managed to look the country—neck deep in corpses, ruined families and lives—in the eyes & lie that he’s done a great job https://t.co/1R4OaIoBVt 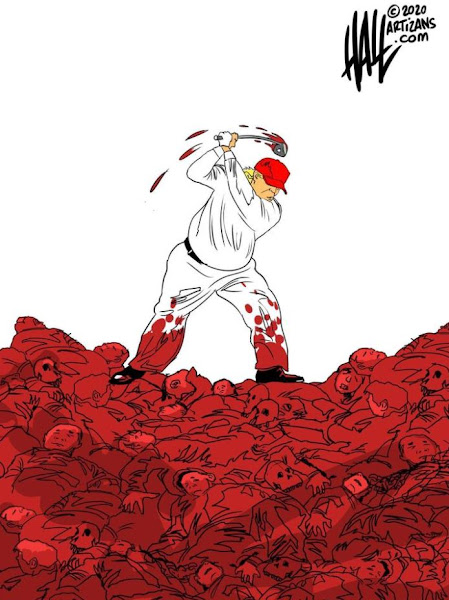