Team Trump Releases The Kraken, Claiming Powell Was Not A Member Of
Trump's Legal Team (After Trump Said She Was A Member of His Legal Team) 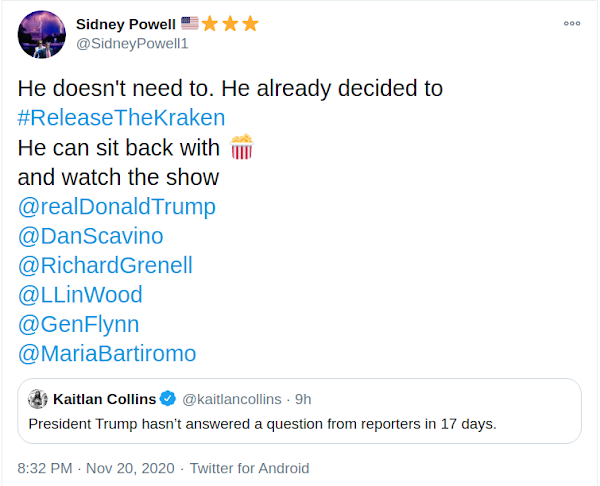 Were Sidney Powell's crazy, nonsensical rantings about voter fraud and threats to "Release The Kraken" a little too crazy for the desperate duo of Donald Trump and Rudy Giuliani?

The campaign claimed that lawyer Sidney Powell "is not a member of the Trump legal team," even though the president and Trump attorney Rudy Giuliani had previously identified her as being on the team https://t.co/o4g4FGKrzy

It's been incredible watching Trumpworld hype Sidney Powell up as the greatest lawyer in American history — then promptly drop her when she suggested that Republicans, too, engaged in her imagined election fraud schemes. https://t.co/kF2yyhY0Wh

The Trump campaign says Sidney Powell, who Trump said is on there legal team, is not on their legal team.

If you’re wondering how things are going. pic.twitter.com/vFzHhTFQnx

I just can’t get over the sheer soul-crushing humiliation of getting pegged as too “out there” on a team with THIS GUY.

Sidney Powell of what now? https://t.co/aZqoTgOrP1

Sidney Powell will no longer have a vote on Trump legal strategy, making her the only American Trump has successfully disenfranchised in the course of 34 lawsuits.

“I was told there would be Kraken” pic.twitter.com/V6zPtj2hR8

Before he deletes, here’s Republican FEC Chair ⁦@txelectionlaw⁩ staking his entire reputation on Sidney Powell’s honesty. He should step down yesterday. pic.twitter.com/d6FzvttVnE

It’s obvious Sidney Powell was thrown under the bus because she accused the GOP governor of Georgia of gargantuan crimes, not because she’s a lunatic.

Don’t kid yourself. If you change this tweet to a Democratic governor, Powell would still be on the legal team today. https://t.co/Ur4OQrtuMe

Or maybe she just asked to be paid upfront

This is infinitely more believable than that Powell crossed some nonexistent line of absurdity or ineffectuality that even Trump couldn’t brook. https://t.co/ODFwfbcQip

Sidney Powell released this statement to @CBSNews and @kristincbrown after the Trump campaign said she's not on the team: