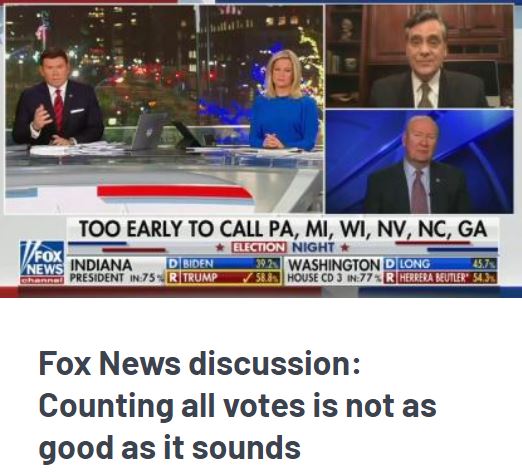 Media Matters watches Fox News, so you don't have to.
Here's the latest:

Fox contributor says "we should do everything to try to prevent" Pennsylvania from counting legal votes
Fox News discussion: Counting all votes is not as good as it sounds

Fox anchor hypes "tons of ballots" found under a rock in Arizona. There were only 18 ballots, and all were delivered.

Rudy Giuliani: Trump should declare victory "as early as possible"

Roger Stone: If Trump wins, Rod Rosenstein and other "coup" plotters "must be hung by the neck until dead"

Completely Unhinged would be 1 description of All That

Those with sense will enjoy watching these Frauds make Fools of themselves ..... repeatedly !

Yeah, that's a winner. I clicked:

"RACHEL CAMPOS-DUFFY (FOX NEWS CONTRIBUTOR): I really appreciate that Donald Trump doesn't pander to Hispanics and minorities in general. His message of optimism is the same one he gives to Wisconsin rural white voters, that he gives to Black voters, that he gives to Hispanic voters, and I think there are plenty of minorities out there who are craving a return to Martin Luther King's message about judging each other as Americans on the content of our character, rather than the color of our skin. And so I think that he has a positive message, he's going to win tomorrow, and it will be because of minority voters."

"His message of optimism" - LOL!

His entire campaign has been nothing but how the suburbs will be destroyed, cities will burn and have non-stop riots, mobs of leftists will kill you in your sleep, and there will be an unprecedented depression if he's not elected.