Trump had a pandemic rally (perhaps the last one) in northern Minnesota last Wednesday. Now coronavirus cases are on the rise there. https://t.co/tpckOIx60W

President Trump, wearing a mask, rides by his supporters outside Walter Reed while in the back of a Suburban. pic.twitter.com/nsCJyYXHdK

His ego is so fragile that it must be stroked constantly. He is endangering everyone in that vehicle and he does not care.

Seven months into global pandemic that’s killed 200,000 Americans, Trump says he now “understands” COVID after contracting it, and then immediately gets into a car with a least 2 other people to wave at people

Oh, well if it was “last-minute,” then it makes sense (said no one) https://t.co/BBFU1vsIFz

So last minute that he just so happened to have enough time to video tape and tweet his plan first?

This “motorcade ride” is just disgraceful. His selfishness, self-centeredness, and ignorance knows no bounds. To risk the health and safety of his security detail for a “photo op” is just appalling.

That Presidential SUV is not only bulletproof, but hermetically sealed against chemical attack. The risk of COVID19 transmission inside is as high as it gets outside of medical procedures. The irresponsibility is astounding. My thoughts are with the Secret Service forced to play.

Every single person in the vehicle during that completely unnecessary Presidential “drive-by” just now has to be quarantined for 14 days. They might get sick. They may die. For political theater. Commanded by Trump to put their lives at risk for theater. This is insanity.

It's A Death Cult

Listen to this audio. It’s a cult. pic.twitter.com/gSZB4XRsA1

Totalitarian regimes use the state-controlled mass media to cultivate a larger-than-life public image of the leader through unquestioning flattery and praise.

The President's doctor explaining why he lied, and how he destroyed his professional credibility https://t.co/IpAyWaKTIL

I literally can't believe this is a real @nytimes headline right now. pic.twitter.com/O5CYY38nWr

I got a WaPo alert an hour ago telling me that Biden had come up negative for his third test so yeah they’re really playing that close to the vest 🙄 Honestly, @nytimes.

i stopped paying for the times in Aug 2019. (I still read the tech section tho b/c it’s still unparalleled in many ways) pic.twitter.com/Qq30Q3cy8z

Absolutely no one had "take a COVID joyride around the hospital to wave at proud boys" on their 2020 batshittery bingo card .

. . . Speaking Of "Proud Boys" –
This is The Most Awesome Thing I've Seen In A Long Time 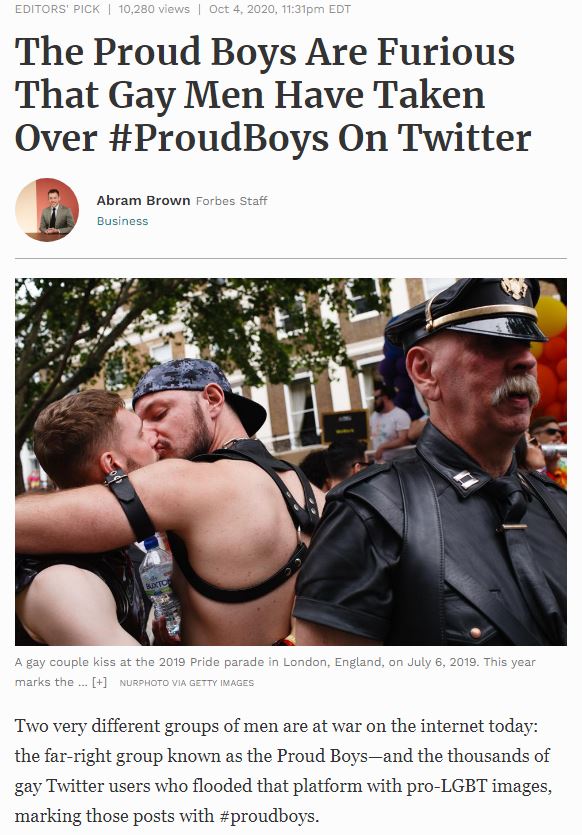 Six days after Trump told the far-right Proud Boys group to "stand back and stand by," internet users have reclaimed the #ProudBoys hashtag and keyword phrase, flooding Twitter and Reddit with photos of gay men in love and expression physical affection. https://t.co/1InD2h2uOC

The #ProudBoys are ready, as long as it’s safe to do so! pic.twitter.com/QHZWUtZvn3

My husband and I with our newborn daughter. Now she’s in Kindergarten. We’re truly #proudboys pic.twitter.com/Xwiy8Tg9OY

I’m proud of the #ProudBoys in my extended family. Ray and Joe were together 55 years. They were married August 1st 2013, the day same sex marriages became legal in Minnesota. They met in 1960. They were together 53 years before they were allowed legally to marry. pic.twitter.com/cqQykDjdED

So why do they want son @realDonaldTrump to distance himself from the #proudboys ? I kind of find them cute. pic.twitter.com/AdEN74r0Lf