Bob Mould Turns 60 (And Remains A Punk At Heart)

Bob Mould, rock and roll songwriter extraordinaire, guitarist and singer for Hüsker Dü, Sugar, and various bands under his own name, celebrates his 60th birthday today*.

Mould released Blue Hearts, his 14th solo album, about three weeks ago. "American Crisis" occupies the coveted third slot on the track list, Mould's usual spot for an album's first single. It's a good old-fashioned protest song. After an opening scream, amid bashing drums and roaring guitars, a yell can be half-heard from deep inside the maelstrom: "I never thought I'd see this bullshit again!"

"American Crisis" was actually written during the sessions for Mould's last album, Sunshine Rock. At that time, though Mould was trying his hand at a more optimistic album, so he kept the tune in his back pocket.

I saw parallels between Trump and Reagan, these Hollywood celebrities brought to power by the religious right, and remembered how I felt in the 80s, a young gay man certain of my sexual preference, if not my sexual identity, with the "moral majority" telling me AIDS was God's punishment. I didn't understand then how to advance my community's cause. But things are so bad now that no reasonable artist can keep their mouth shut. And the words on this album are blunt. This is no time to be oblique or allegorical.

While Blue Hearts has several clear declarations of anger and disbelief and confusion at "a nation in flames", of being subjected to a daily "fountain of lies . . . in a fucked up USA", there are also the more personal ruminations of a middle-aged man ("the lines get deeper on my face each season") turning away from the chaos of the world and trying to make sense of his personal life. Even so, nearly every song includes a topical lyric (though good luck finding them without the lyric sheet):

"What if they bring back the national draft and all of our children are called?" ("Fireball")
"Would this be blasphemy: When you're a star, you can do what you want" ("Forecast of Rain")
"We keep shifting all the blame. So toxic, I could not breathe" ("When You Left")
"Across this land there are no nature scenes / Instead you drill and pillage everything of beauty" ("Siberian Butterfly")
"Left behind and frightened, their blood begins to boil / Stock up on provisions: God, guns, and oil" (Password To My Soul")

Throughout Blue Hearts, Mould is shaken by what he sees and hears each day. It's a constant worry. Ten songs after admitting "this American crisis keeps me wide awake at night", he confides "this constant state of crisis leaves me frail, afraid, and weakened". He searches for and finds comfort and refuge in companionship:

"We all need something / No one can live on nothing . . . I want to be everything to you"

And, of course, music offers hope: "We turn to music when our hearts are filled with doubt."

The songs on Blue Hearts get straight to the point, say their piece (perhaps offer a terse guitar solo), and move on. There is no fucking around. The first seven songs range from 1:40 to 2:33. The only song over three minutes is the closer, "The Ocean". Mould is joined once again by bassist Jason Narducy and drummer Jon Wurster, his rhythm section for the last nine years and five albums.

Blue Hearts' noisefest actually begins with acoustic guitar ("Heart On My Sleeve"), as Mould gives us the state of the union:

The left coast is covered in ash and flames
Keep denying the winds of climate change
The deep south sinking into the sea
But you don't believe me
Across the plains are fields of rotting wheat
Appalachian trail of pain relief
And the cities are teeming
Roiling over with tension and greed
The rising tide of a broken government
Gold boats are floating on cement
And we're going to war
And we're going to die . . .

Who knows what things will be like two generations from now
I won't be here but I'll predict you'll feel a certain urgency
It's not a panic, it's a reaction, a call to action . . .

When I'm hoarse and deaf and feeble, nobody's going to listen to me
Time to take one last stand, try to make you understand
Life isn't a joke, it's so much more, it's all we get, there's nothing else

I recognize the importance of religion for those who believe: the worship, the rituals, the community; loving thy neighbor, following commandments, doing unto others as you would have them do unto you. In short, be nice to people, help however you can, and don't steal stuff. But right now, I'm having a hard time understanding how certain religious sectarians can support the behavior of those who occupy the People's House. How can you endorse their disregard for truth? How can you tolerate the incessant vindictiveness? How can you stand by your man while people are teargassed to clear a path to the Lord's House?

He sings: "My truth is different than your distortions and disguised / Interpretations twisting the words of ancient times". (The album is not without a dash of humour. Speaking of hypocrisy, there's this line in "American Crisis": "Pro-life, pro-life, until you make it in someone else's wife".)

If you're watching the lyrics during the video, you'll miss the two buildings with the corporation names "Chump" and "Lump". 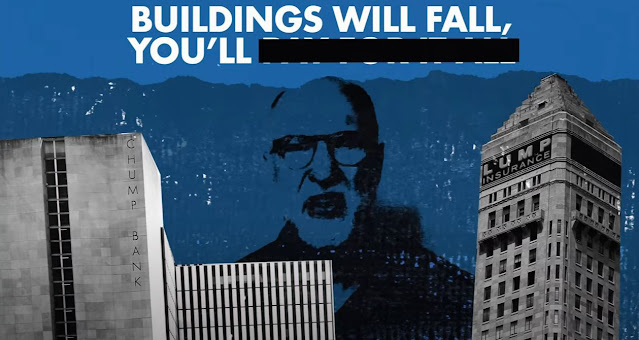 "Siberian Butterfly" hits on themes of change, growth, and freedom (and sexuality and self-worth).

These motifs are central to how we become our true selves. This is how we begin our journey toward our true identities. It's autobiographical as well. I put myself through some self-hating years as a young gay man — never feeling "good enough", not recognising the positive qualities I had to offer, while inhibiting the development of my gay identity. I hope for a world where all people can be what they want to be. Life seems shorter every day; maybe this simple song can be of use to people who are struggling to find their true selves.

About ten years ago, Mould worked with Michael Azerrad for several years on his autobiography; See A Little Light was published in 2011. All of that work (in addition to hours of interviews, Mould did a lot of actual writing) and the book's main theme of self-acceptance appears to have freed Mould creatively, because he produced three consecutive albums that stand among the best work he's ever done: Silver Age (2012), Beauty & Ruin (2014), and Patch The Sky (2016).

The later two albums were infused with the sadness and acceptance of the deaths of his parents. After that, Mould thought he'd try something new: an upbeat album. Of Mould's 11 songs on Sunshine Rock, four have the word "sun" in the title. But there is also "Irrational Poison", "The Final Years", and "Lost Faith". Perhaps a 100% cheery Bob Mould album is simply not possible!

At the moment, the high points of Blue Hearts for me are "When You Left", "Little Pieces", and the intoxicating, fuzzy foot-stomp of  "Baby Needs A Cookie", which has an added bonus: Mould has placed his vocals a little higher in the mix.

Also, his comment on Reagan and the AIDS crisis is excellent. This:

I didn't understand then how to advance my community's cause.

is great to read. It explains a lot, puts his former choices in context.