Gorsuch: Courts Must Not Succumb To The "Temptation" To Protect the Right To Vote

BREAKING: Supreme Court sides with Republicans to block voting accommodations in Wisconsin. The vote is 5-3.

Justice Gorsuch: federal courts must not succumb to the "temptation" to protect the right to vote pic.twitter.com/2v1UmWHtaB

The President complains about states counting all the ballots pic.twitter.com/EFYaeQ5YyW

AND he wasn’t declared winner by the states. The AP called it then the states counted all the ballots to confirm AP’s call. They didn’t just stop.

Trump said on Tuesday that counting all the ballots cast in an election is (or should be) illegal. He wants all votes received after Election Day (no matter what the reason for the delay) to not be counted.
The Supreme Court appears to agree with him. Even though many of the ignored ballots would have been cast for Trump and there has never been an election in the United States in which all ballots were counted on Election Day. Never. Not one. 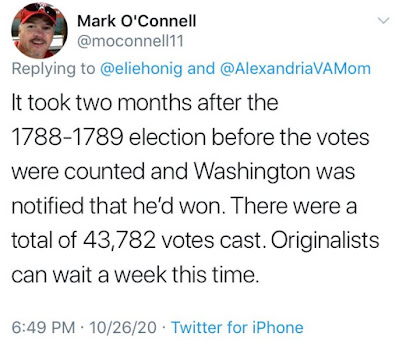 But Trump et al. don't care if all the votes for him are counted. The vote totals in any particular state (and the US, in general) are irrelevant. The goal is creating widespread chaos and having the Supreme Court award him a phony victory. Trump has gone a long way towards achieving that goal by installing a justice that many Republicans are publicly bragging is wholly partisan.

admitted he hates testing for the coronavirus "in many ways"

thinks all women are housewives and don't have jobs

bragged that he punched the virus and beat it up

boasted that many dictators, who are also his friends, praise him for the awesome job he's done with [destroying] the American economy

A Reminder Donald Trump Has Never Been Able To Discuss
The Specifics of Anything (Even When His Mind Was Functioning
Fairly Normally); To Say Trump Is As Dumb As Dirt Is An Insult To Soil

Trump's 60 Minutes interview reminded me of when he walked out of a 1990 interview with CNN when asked about his finances.

Once again, Trump's completely incapable of citing *anything* specific when pressed even on the most basic level. He's not just an empty suit, he's a complete vacuum.