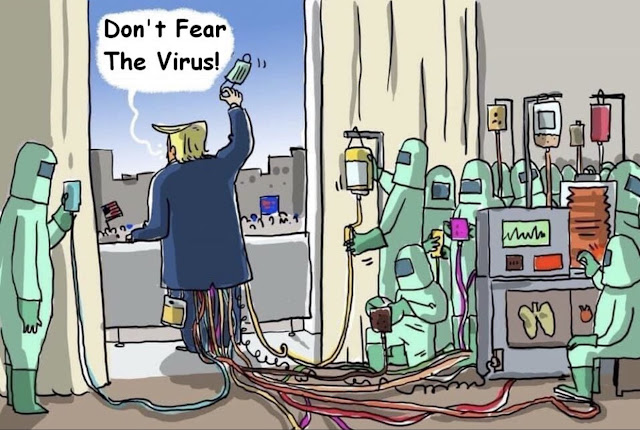 Holding this White House rally exactly 2 weeks after the rose garden super spreader event is the medical equivalent of treating a headache by giving yourself a concussion.

a bit on the nose pic.twitter.com/JD9BVIkVEy

Trump begins his first post-coronavirus diagnosis speech by telling his adoring fans at the White House, "we gotta vote these people into oblivion. Into oblivion. Gotta get rid of 'em. So bad for our country." pic.twitter.com/RtH7O8jYY7

I see we’ve reached the Crazed Dictator Speech From The Balcony portion of our national decline.

So it's now just perfectly normal to hold campaign rallies at the White House.

It seems like only yesterday that the entire right wing had a full blown hissy fit over a president inviting some donors over for a private coffee.

"I was in that hospital, I was watching down over so many people" -- Trump pic.twitter.com/5n3Eq5VrVN

It’s a cult thing. Notice how cult leaders also refer to themselves as a prophet or some other higher power closer to Jesus and God than anyone else. People in the cult eat this up as the absolute truth. Cult 45 has definitely come to fruition.

Trump falsely claims the coronavirus is "disappearing," then suggests the situation in the US isn't that different from elsewhere, saying, "very big flareup in Canada." Canada had about 2,500 new coronavirus cases on Friday, whereas the US had more than 58,000. pic.twitter.com/gzeHPZ2O6O

Trump on mail voting: "I think we're gonna swamp 'em by so much hopefully it's not gonna matter, and we have law enforcement watching." pic.twitter.com/sW4CsHXWC5

It's a personality cult pic.twitter.com/x0pdXXzwZG

Trump spoke for 18 minutes, after officials said it would be 30 minutes. Unusual.

It took her four years to figure this out. Not exactly Nancy Drew, is she? https://t.co/fnAOw4dx3U

The president said there was "congestion" in his lungs. Conley has said the scans showed "expected findings" but didn't say what that meant. https://t.co/KTnVJ1kPaq

I wrote about the presidents crazy interview with the hyper partisan doctor on fox “news” in ⁦@thedailybeast⁩ https://t.co/1yW7B8pAL6