Donald Trump Tests Positive For SARS-CoV-2;
Ten Days Ago, He Insisted: "It Affects Virtually Nobody" 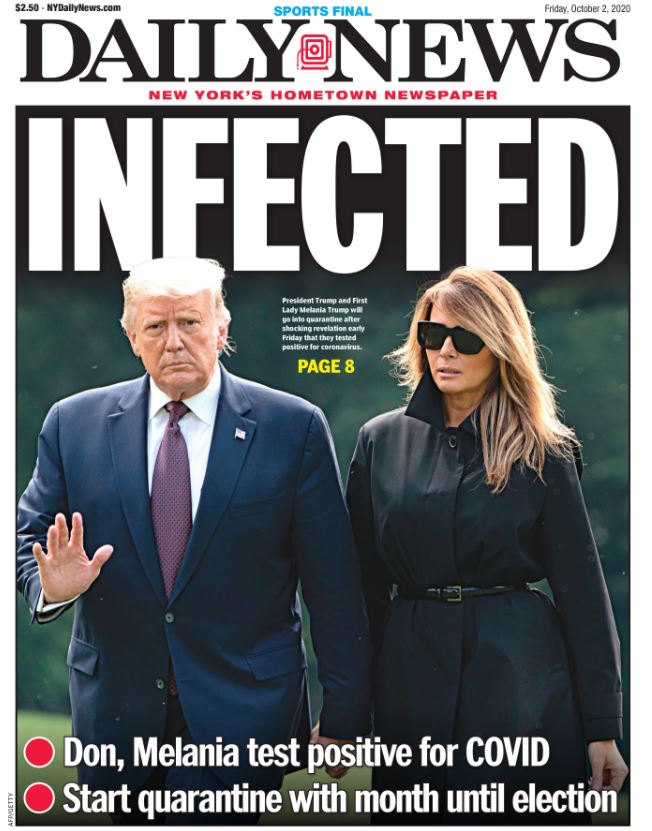 Only hours after insisting, as he has done for the past eight months, as regularly as a metronome, that "the end of the pandemic is in sight", it was reported Donald Trump tested positive for SARS-CoV-2.
He and Melania Trump (who apparently also tested positive) had been reportedly under quarantine earlier on Thursday after Trump adviser Hope Hicks was said to have tested positive. There was no other information provided about Trump's condition.
There are 33 days remaining before the election. Peter Baker and Maggie Haberman (New York Times) reported:

Even if Mr. Trump, 74, remains asymptomatic, he will have to withdraw from the campaign trail and stay isolated in the White House for an unknown period of time. If he becomes sick, it could raise questions about whether he should remain on the ballot at all.
Even if he does not become seriously ill, the positive test could prove devastating to his political fortunes given his months of diminishing the seriousness of the pandemic even as the virus was still ravaging the country and killing about 1,000 more Americans every day. He has repeatedly predicted the virus "is going to disappear", asserted that it was under control and insisted that the country was "rounding the corner" to the end of the crisis. He has scorned scientists, saying they were mistaken on the severity of the situation.
Mr. Trump has refused for months to wear a mask in public on all but a few occasions and repeatedly questioned their effectiveness while mocking Mr. Biden for wearing one. Trailing in the polls, the president in recent weeks increasingly held crowded campaign events in defiance of public health guidelines and sometimes state and local governments . . . with hundreds and even thousands of people jammed into tight spaces, many if not most without masks.
A positive test will undercut his effort to change the subject away from a pandemic that polls show most Americans believe he has mishandled and onto political terrain he considers more favorable. . . . [T]he symbolism of an infected president could rattle governors and business owners trying to assess when and how to reopen or keep open shops, schools, parks, beaches, restaurants, factories and other workplaces. Eager to restore a semblance of normal life before the election, Mr. Trump has dismissed health concerns to demand that schools reopen, college football resume play and businesses resume full operation.
In his eighth decade of life, Mr. Trump belongs to the age category deemed most vulnerable to the virus. Eight out of every 10 deaths attributed to it in the United States have been among those 65 and older. . . . Trump has been reported to have high cholesterol and tips the scale at 243 pounds, which is considered obese for his height . . . [U]nlike many of those who have succumbed to the virus, he will have the best medical care available.

Throughout the pandemic, Trump has downplayed the severity of the coronavirus, saying it "affects virtually nobody" at a rally, and has dismissed science-based public health measures during the pandemic, including undermining the importance of wearing masks.
At 74 years old, Trump falls into the highest risk category for serious complications from the disease. A report in Nature noted that for every 1,000 people in their mid-seventies or older who are infected, about 116 will die. This implies that Trump has about a 12 percent chance of dying of COVID-19. Melania, who is 50, has a lower risk of having serious complications from the disease: only 5 in 1000 people in her age range die, on average, of COVID-19 after being infected.

The White House kept Hicks's condition a secret even as she presented symptoms of the virus earlier in the week. The Trump campaign knew on Wednesday evening that she had tested positive, but did not inform anyone who would have been in proximity to her. Trump held a rally that night, putting hundreds and possibly thousands of people at direct risk for a disease that has killed more than 213,000 Americans and over one million people worldwide.
On Thursday, despite being well-aware Hicks had contracted the virus and that there was a strong chance he had also contracted the disease, Trump flew to New Jersey and hosted a fundraiser at his Bedminster Golf Club, exposing the Secret Service, the club staff, and anyone else unlucky enough to get within spitting distance of him. Referring to Trump as a "mass murderer" is not hyperbole.
Hicks is at least the fourth person close to Trump to test positive. Katie Miller, Mike Pence's spokeswoman, caught the virus in May. In July, both Kimberly Guilfoyle, the girlfriend of Donald Trump Jr., and National Security Adviser Robert O'Brien tested positive. 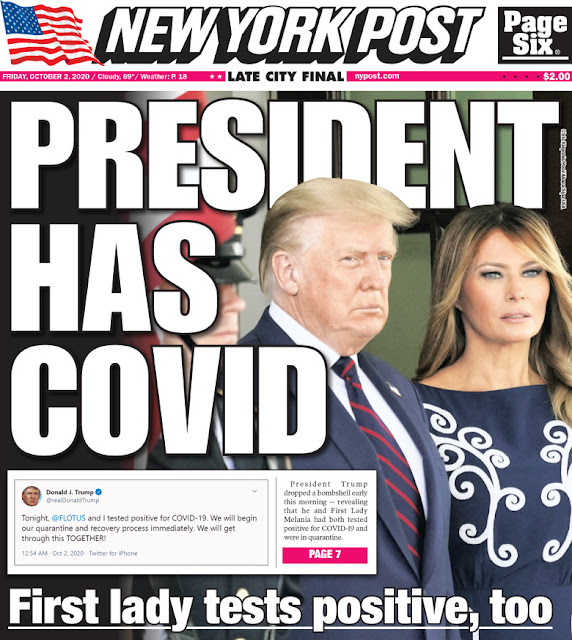 After many months of downplaying the virus, spreading conspiracy theories, criticizing health measures, and refusing to report the number of cases and deaths, Fox News [sic] suddenly expressed concern.

You would hope and pray that people would take this seriously, him being the Commander in Chief.

Yes, well. Not everyone pretended to give a shit.

He failed to protect the country.

He couldn't even protect himself.

Yes, why is @realDonaldTrump putting himself at risk of having covid by having himself tested? That's so crazy! https://t.co/rG4hAGm03I

NO! NO! NO! I tested positive for COVID!!! NOT KARMA!!! #TrumpHasCovid

Hydroxychloroquine stand back and stand by

Has anyone thought of the ramifications if the virus has jumped from Human to Trump?

"quarantined on the plane" is some kind of next level genius https://t.co/1JTfzceDko

Yes, I am absolutely celebrating an obese 74yr old fascist imbecile contracting a hyper contagious disease. You will hear no pouting here, and the karmic wheel ignores your complaint.

Whatever your politics, whatever your party or candidate, wherever you stand on one issue or the next, if you care about the United States of America and want it to flourish you have to admit that all this shit is objectively hilarious and rules very much.

And so much more, coming up on an all new This Shit Again.

Breaking: Trump says he cannot release the results of his Covid test because they are under audit

Some other stuff happened on Thursday before Trump got bit by The Hoax.
Trump has lied about every single thing there is to lie about, except Nazis and the Klan and other assorted racists and bigots. Well, at age 74 and time running out, he finally completed the list. "I condemn the KKK, I condemn all white supremacists, I condemn the Proud Boys." Of course, Trump didn't say those meaningless words to a worldwide TV audience during Tuesday's debate. That, he categorically refused to do. But, like a kid forced to eat a plate of cauliflower, Trump called into Hannity and went through the motions.
Everyone already knows how Donald Trump truly feels about racists. And his well-earned, decades-long reputation as an arrogant, delusional, cruel and psychopathic serial-rapist, as a thin-skinned, sadistic, chronic failure of an irredeemably horrible con-man, and a 260-pound bag of hot diarrhea is in no danger of suffering damage.

"Yesterday I made a statement that was according to most, a perfect statement ... I've said it many times, let me be clear again, I condemn the KKK, I condemn all white supremacists, I condemn the Proud Boys ... [Biden] should condemn antifa" -- Trump pic.twitter.com/2b2vUCZaJW

"I go through this every year..." during my annual denial of supporting white supremacists when I begrudgingly pretend to condemn them. pic.twitter.com/xgH3uvGIj8

That coherence that everyone talks about

The projection is just stream of consciousness at this point.

Republicans won’t bat an eye over Donald Trump being $421 million in debt to potentially shady characters, but throw a tantrum over unemployed workers getting $600 a week to feed their families and pay rent during a pandemic.

Full Melania Trump video: “They said, ‘Oh what about the children that were separated?’ Give me a fucking break.” pic.twitter.com/FQF3AJshXP

Hey Evangelicals. That 'War on Christmas' you're always talking about...

It's coming from inside the White House.#MelaniaTapes

It is October. But is this a surprise?

Here's why the #MelaniaTapes are out:

The Trump inauguration is under federal investigation for making massive payments to the Trumps and possible money laundering. They raised $107 million that just disappeared. https://t.co/Ahy45KiG6O

As always, appreciate your round-ups and comments.