Donald Trump has no clue how to "use" quotations marks.
What exactly constitutes a "full" preview?
And "their" questions? Did Lesley Stahl do various impersonations, causing Trump to think she was multiple people?

I will soon be giving a first in television history full, unedited preview of the vicious attempted “takeout” interview of me by Lesley Stahl of @60Minutes. Watch her constant interruptions & anger. Compare my full, flowing and “magnificently brilliant” answers to their “Q’s”. https://t.co/L3szccGamP

How the raw 60 Minutes tape posted by Trump begins:

LESLEY STAHL: "You're okay with some tough questions?"

STAHL: "You're not okay with tough questions?"

Trump thinks this looks *good* for him!!! pic.twitter.com/fhfPUnpFwn

Asked what his biggest domestic priority is, Trump touted the pre-pandemic economy, repeated his dubious claim about saving millions of lives, did the misleading claim about record job creation today...Stahl had to ask 3 times for him to say priority is getting "back to normal."

When Stahl pressed Trump about Covid-19 cases going up, Trump repeated his nonsense about how it's because we're doing more testing.

She didn't accept the nonsense, pressing him repeatedly. He didn't like this.

Stahl pointed out that people can see for themselves that it's not true when he says we have "turned the corner" and that it's "disappearing."

Trump: "That's right, we have turned the corner."

It's absolutely deadly for him.

He says this about coronavirus:

"We got hit by something. Not MY fault."

This should be in Dem ads tomorrow. https://t.co/ON8ehVN4lB

President Trump claims that, under his inchoate healthcare plan, people with preexisting conditions would be protected.

"How?" @60Minutes's Lesley Stahl asks, no fewer than five times.

In the 60 Minutes interview footage he just released, Trump tells Lesley Stahl he has a totally finished health care plan, then says "we will come up with a plan," then says "we have large sections of it already done," then says he needs to see what the Supreme Court will do.

In North Carolina, President Trump says Lesley Stahl questioned him about his recent comment where he asked suburban women to “please like me.” He says that was sarcastic, just like his “Russia, if you’re listening” remark. 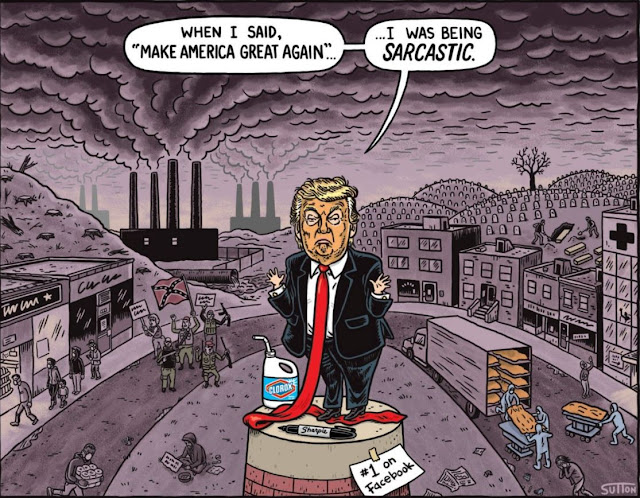 Raw footage: Trump walks out of interview after complaining that Lesley Stahl's questions were too tough for him pic.twitter.com/5MplZffcF4

“A senior White House official said Trump told aides he wanted to go after Stahl and brainstormed ideas after the session with a group of aides in the Oval Office.”

More than 221,000 Americans have died from COVID and this is how Trump spends his time. https://t.co/20Cxd8IUYr

Why does #Trump rage at Lesley Stahl & Dr. Fauci?

Because they are “standing in the way of his effort to conduct this campaign in an entirely invented universe that he’d hoped to manufacture.”

Being pressed by a woman like this is the absolute fucking worst case scenario for his psyche. His brain just breaks, you could see it in press conferences when it happens. And there’s a distinct difference between when a man does and when a woman does it..

Has there been a bigger whiner in the history of politics than Donald Trump? pic.twitter.com/0uN4x4WmLA

Trump's constant victimhood is a symptom of his malignant narcissism. It is false. It is distorted. It’s a delusion. Trump feels victimized as a way of protecting his self-image of superiority and grandiosity. His self-image must be maintained at all cost.

Whatever comes out of this interview, Lesley Stahl got one of the most important Trump quotes back in 2016, re his attacks on the press:

"You know why I do it? I do it to discredit you all and demean you all so when you write negative stories about me, no one will believe you."

This campaign is a well oiled machine lol.

Everything With The Trumps Is Projection

Apropos of the Hunter Biden story, let me remind everyone that in her factories in China and elsewhere abroad (she doesn't make things here in the US, Ivanka Trump docks women workers for menstruating. I did a story on this I can't find on Google but ↘️https://t.co/zn4LVCPvER

It’s a good morning in Times Square for Ivanka and Jared. pic.twitter.com/gbtiHq9NtK

Donald Trump Jr is now accusing Hunter Biden (without evidence) of being link to "human trafficking and prostitution rings" pic.twitter.com/gHhlukQ8cN