Trump: The First Person In The World To Get Coronavirus And Be Healthier Five Days Later

I should have known the post-Trump-Getting-COVID era would be more surreal, with more mind-bending stupidity, than what came before (which was already extremely hard to fathom). I have a weak imagination, perhaps. It's one of the many reasons I don't make a living writing dystopian neo-Nazi fiction.
What a fucking morning.
The Field For Dumbest Right-Wing Extremist Is Very Crowded, But Don't Bet Against Tomi

Might as well carry a purse with that mask, Joe. https://t.co/RugCFkC1GQ

If scientists said a purse could protect me and my fellow Americans from #COVID19, I would carry a purse. pic.twitter.com/Vddu1539jg

Can we just eliminate the stigma of men carrying purses in the first place? It's just a bag you put shit in that you can't fit in your pockets. How did utility become a masculine/feminine thing?

There are currently more confirmed cases of corona virus in the White House than in New Zealand, Taiwan & Vietnam COMBINED. #SoMuchWinning

Rich doesn’t mean smart: “They took their assigned seats, at some distance from the podium where Trump spoke. The tables were spread out, though the seating at each table was normally spaced. Nobody was worried because they had all just tested negative” https://t.co/IhDL14UP0e

"the president has been a phenomenal patient"?

this is absolutely ridiculous.

I can’t believe they a made a video to illustrate COVID infecting the President pic.twitter.com/Ur1cQ3MEHJ

7 months and we’re back where we started pic.twitter.com/hB2kLqxS6I

Amid all the essential questions that the White House refuses to answer about Donald Trump and Covid-19, journalists should pay particular attention to the ones it is refusing to answer most aggressively.
Possibly chief among those is: When was Trump's last negative test? Reporters have repeatedly asked, and the Trump team steadfastly refuses to say, even though there ought to be nothing remotely controversial about it. . . .
We need to find out when Trump's last negative test was. We need to find out how often Trump was tested. And of course we need to find out if he had a positive test before the ones on Thursday. . . .
If Trump can be shown to have known or suspected that he was infected on Tuesday — or earlier — then the world will know he chose to endanger Biden and everyone else at the debate rather than do the responsible thing and bow out.

Remember when Trump insisted Biden get drug tested before the first debate? https://t.co/p5A3958iih

A scary thing about the White House Covid cluster is that it shows how Republicans are actually drinking the Kool Aid. Despite 210,000 deaths, they really think Covid is no big deal.

The apostrophe fail leads me to conclude that Trump actually wrote this one https://t.co/VcP7pxB85Y

They’re just writing out the working people from the reality of what happened. pic.twitter.com/JvEPX1jmEA

BREAKING: The top US general, Gen. Mark Milley and several members of the Joint Chiefs of Staff are quarantining after a top Coast Guard official tested positive for coronavirus, several US defense officials tell @barbarastarrcnn

Asked about reports that staff and Secret Service are worried about coming to work at the White House coronavirus cluster, WH Communications Director Alyssa Farah says, "we feel comfortable working here -- those of us who are still here." pic.twitter.com/8NEmGOzxSz

9 days after the ACB event at the White House ... https://t.co/Z3tCWPQIAI

It’s true that “he reports no symptoms” sounds artfully worded to avoid discussing any observable symptoms the president may have. At the same time, this doctor and this WH flat out lied about his symptoms five days ago so I don’t know how much reward we’ll get for close reading.

New: All but one member of the Joint Chiefs of Staff is now self-quarantining due to exposure at multiple meetings in recent days, including a meeting in Pentagon’s secure meeting space for classified information known as ‘the tank’, a defense official tells @barbarastarrcnn

The White House still hasn’t said when Trump’s last negative coronavirus test was, and as a result we don’t know how long he’s been sick or exactly who he exposed to the virus https://t.co/onblFmZPHh

While Posting This List, I Saw News That 2 Additional White House Staffers Have Tested Positive, Including Trump's Valet (So, 37) 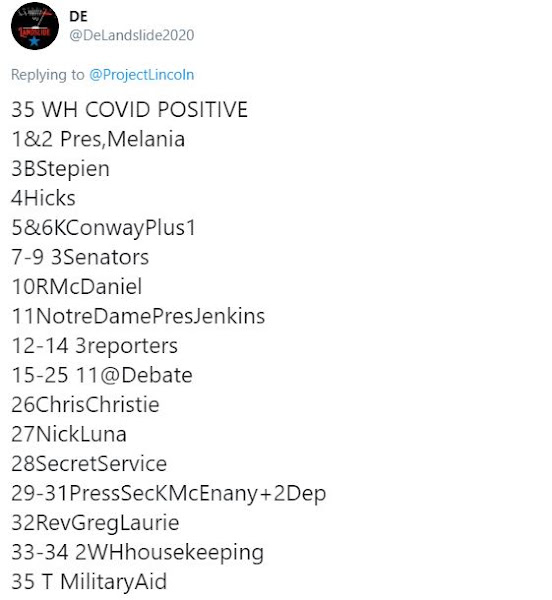 "I feel really good about the event" -- Sen. Kelly Loeffler suggests she wouldn't do anything differently regarding the White House superspreader event she attended pic.twitter.com/R7jGVQFSfd

Invalidating your own marriage to own the libs. https://t.co/daKoDdUIRe

NEW: “They’ve given us more masks, but that’s about it,” one WH official tells @JoshNBCNews, about what, if any, precautions have been taken for staffers still showing up to work at the White House, following Trump’s COVID diagnosis.

They are blue, disposable surgical masks.

I appreciate the GOP's new "fuck old people and kids, they're holding us back" approach. I think it's gonna be an electoral winner. https://t.co/bfdFfOw08N

On a Democratic call, reacting to the President abruptly breaking off stimulus talks, Speaker Pelosi questioned whether Trump taking a steroid was impacting his thinking, according to two people on the call.

“Leading people off a cliff is technically leading. But it’s also stupid and deadly.” – @brikeilarcnn pic.twitter.com/K1KqP4asFf

Donald Got COVID For Somebody's Sins, But Not Mine

Here's the audio of Eric Trump listing "he literally saved Christianity" as one of his father's accomplishments in office. pic.twitter.com/uJG6YUPAbq