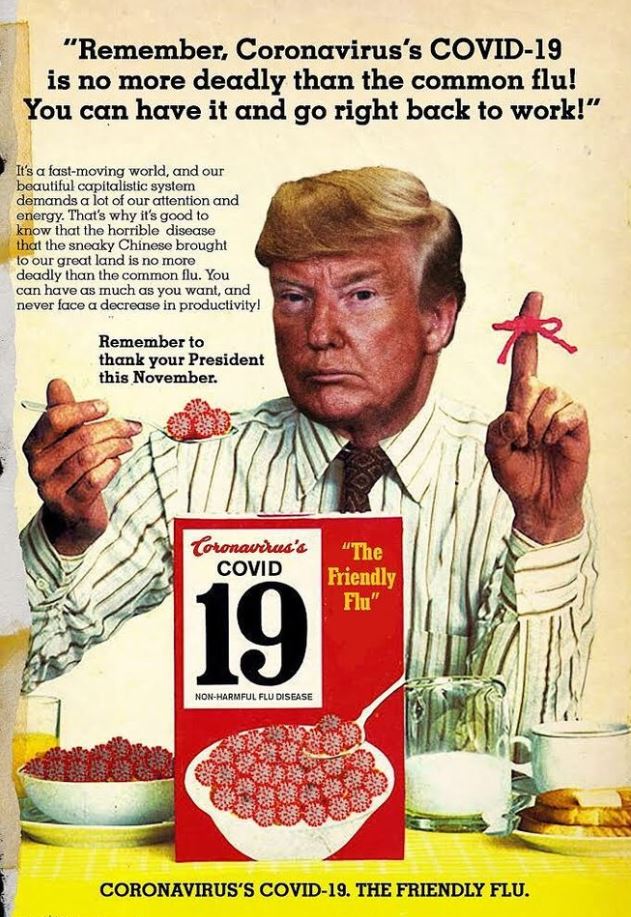 A new record for the most single-day new cases for any country on Earth and the first day with 80,000+ new cases

Our World In Data reports 85,329 new cases (which would be a new single-day record)

A new record for the most single-day new cases for any country on Earth.

". . . a safe vaccine is coming very quickly. You're going to have it momentarily . . . we're rounding the turn regardless. You know that. We've got the vaccine. I say, regardless, they'll say, "Well, maybe you don't." We have it. . . . We pioneered groundbreaking therapies and I'm telling you we're down 85%. Think of that. Think of that. Down 85%. Nobody has any idea what that means . . ."

A new record for the most single-day new cases for any country on Earth and the first day with 90,000+ new cases. First instance of three consecutive days with 1,000+ new deaths in almost two months.

"All Biden does is talks about COVID. Right? He doesn't call it the China virus. You know why? Because China has him paid off. He can't use that term."

Back in late June, Dr. Anthony Fauci told the US Senate he "would not be surprised" if new virus cases eventually topped 100,000 per day. With cases increasing from coast to coast and more than 91,000 new cases on Thursday, it looks like the US will be hitting six figures very soon. 41 of the 50 states have at least 10% more new cases this week as compared to last week.
About fourteen weeks ago (July 22), the US death toll was roughly 145,000. At that time, covid19.healthdata.org projected "219,864 deaths by November 1, 2020". The US passed that number approximately three weeks ago. The number of deaths is about 235,000.
The Centers for Disease Control and Prevention states that the true US death toll attributable to the pandemic is about 300,000, through early October. This number included "not only deaths known to have been directly caused by the coronavirus, but also roughly 100,000 fatalities that are indirectly related and would not have occurred if not for the virus".
* * *


As good an ad about Trump as I've seen. I hope you'll retweet it. pic.twitter.com/G5e5L0HyRu

Democratic Rep. Raja Krishnamoorthi says documents reveal that the Trump administration attempted to use $250 million of taxpayer money, meant for Covid-19 education purposes, as a "slush fund" to help President Trump's reelection campaign by trying to rebrand the pandemic. pic.twitter.com/KEBsLRUBc9

"We're never gonna lock down again" -- Again I ask you: if Trump was intentionally trying to infect as many Americans as possible with coronavirus, how could we tell the difference? pic.twitter.com/3WzJgrvqW4

There is not a single mask visible in the packed crowd behind Trump. His campaign is giving up even pretending to try to slow the spread of coronavirus at his pandemic rallies. pic.twitter.com/TSu6Oqes4K

"Bad things are gonna happen to him" -- Trump on Miles Taylor pic.twitter.com/jTOVMMWh1m

Melania Trump in Tampa: "In a time when hate, negativity, & fear are the messages the media streams into our homes & the large tech companies are protecting political censorship, we need to remember what is really important: my husband's administration is focused on the future." pic.twitter.com/XYl3ZbejUU

Trump: I think google should fire him very quickly because bad things are going to happen to him pic.twitter.com/RVzZR6GdB9

President of the United States calls for prosecution of newspaper for printing op-ed that criticized him. His authoritarian “war with the media" is at the core of his political strategy. https://t.co/evr56BM5Gh https://t.co/i6fOs3EhRA

Trump still thinks that public health measures aimed at slowing the spread of the coronavirus are hoaxes meant to hurt him politically. And 40 percent of voters somehow buy this. pic.twitter.com/y3wc7bLQDU

"You know the bottom line, though? You're gonna get better" -- Trump's closing message is submission to the coronavirus pic.twitter.com/L1FS06SJMV

On Air Force One tonight, press secretary Kayleigh McEnany came back to the press cabin to tell us that President Trump had a “really good, productive meeting” with Lil Wayne in Miami this morning. pic.twitter.com/KSNdiXrQfC

Justice Kavanaugh issued a rare public "correction" to his false claim by changing ONE word. Are we satisfied? In a word, NO. We won't sit by while he uses mistruth about the Green Mountain State as cover to erode voter rights. #FactsMatter Full statement: https://t.co/KmhhnQTFt8 pic.twitter.com/DdN9fqpG42

Senator Perdue been real quiet since he got dragged for mocking @KamalaHarris’ name. He literally said 😶😶😶😶. pic.twitter.com/Nxk1MBTt4C

DO THEY NOT KNOW ABOUT EMAIL? https://t.co/oPbTmdeKAw

It was me. I stole the documents